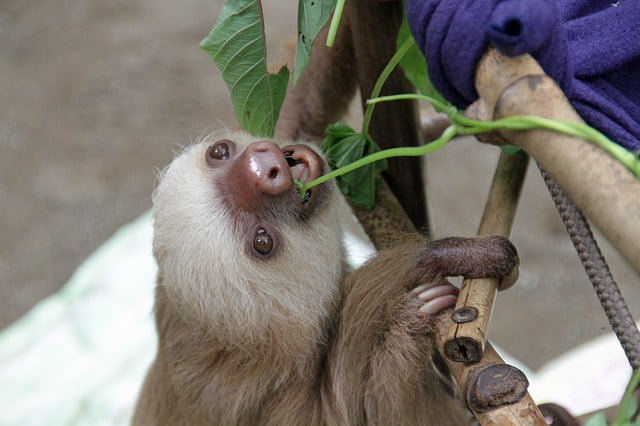 The internet has a lot to say about adult sloths but very little about their neoates. We think that these precious little gems deserve more attention that they are actually getting.

We hope that if this article should do something at least, its bridging the currently massive adult-baby information gap made wider and wider by newer entries on the internet. Enjoy.

How do sloths mate?

All babies are by-products of a biological process known as “reproduction” and baby sloths are no exceptions. Mating in sloths is an interesting concept that has only rarely been observed in the wild and much more frequently in zoo, sanctuaries and other rescue centers.

Because mating in sloths have only been rarely documented in the wild, there is very little information regarding how sloths go about their business in a natural setting. So most of the information given below are based on mating observed in captive sloths and also what researcher think is the case with wild sloths mating.

Sloth mating: How sloths do it

We know sloths are heterosexual and their mode of reproduction is sexual. This means that reproduction requires the union of only male and female partners.

Sperm is deposited into the vagina of the female (her reproductive part) from the bifurcated penis of the male, just like it happens in humans and most other mammals.

Then, if things go as planned, eggs are released from the ovaries and become fertilized by the sperm which renders the resulting female pregnant in no time.

Female sloths are thought to attract sexually interested males by means of a chemical substance called pheromones found in their feaces.

The species of the three toed family climb down to the base of their modal tree to defecate and drop this bomb shell information (two toed sloths also do it, but they dont observe it as strictly as their three toed counterparts).

Interested males parties sense up this information and locate the females that are ready to go down. Then, they climb all the way up into the trees to mate with the females.

Female sloths (according to weak sources) may also call the attention of males to investigate her feaces or even to discover her willingness to mate by using high pitched screams that may last for a few seconds. Interested male parties (having territories overlapping with that of the female) upon hearing this message proceeds towards her territory and then make way into the trees and attempt to try their lucks.

Courting happens in many species of the ‘mammalia’ class but whether or not it occurs in sloths is still a mystery unsolved.

One thing is certain from a research conducted in 2012 however, that female in estrus seems to exhibit a strong mate selection behaviour by picking only the best males to mate with using traits and characteristic that are still not clear yet.

Pauli and Peery in 2012 observed this in a field study where they found out that a single male sired half of all the juveniles they tested during their research [1].

The traits suspected include the large speculum patch in the middle of the backs of males; with males having more colorful, attractive and larger ones being the most likely candidate to father a child. The other one is masculinity.

Sloths can mate face to face or females mounted from behind by the males. Copulation often lasts for a couple of minutes and males attempt to re-copulate minutes after each session.

After mating, the two sloths can be seen hanging out on the same tree for a more than a day, after which the male will depart the tree of the female go about his regular business.

Breeding cycle in sloths is dynamic and still under study. Reproductive cycles varies across familes and the different species within each family.

Brown and pale throated sloths have seasonal breeding cycles and so do the two species of two toed sloths. Maned sloths breed all year round while in the pygmy three toed sloths it’s yet to be documented.

The gestation period in sloths varies across the two families and even within species of the families. If you are one of those lost in the dark, gestation is simply the equivalent of pregnancy in humans. How long a female sloths carries her developing child before giving birth to it. In humans, it’s 9 months while in sloths it may span as longs as one earthly revolution around the sun. Here’s the detailed break down of the gestation period in sloths.

Sloths are placental mammals, meaning that they are mammals that grow a specialized organ called the ‘placenta’ which aids with the nourishment and protection of embryos during gestation.

The organ connects directly to the embryo by means of a biological ‘cable’ known as the umbilical cord. Females often chew this cord along with the expelled placenta for nutrient and bonding motives along with other feeble reasons.

Babies are given birth to head first and facing upwards as their mother desperately hang on from tree branches. The logic behind this orientation is to assist the newly born infant with grabbing tightly onto it’s mothers ventral cavity: a position that she’s more readily prepared to grab, hold and offer all sort of infant-mother protection to this new born.

With foreclaws emerging fully formed and ventral side staring deeply in the depths of the canopies, baby sloths begin to pull themselves out: grabbing unto the mother’s abdominal hairs and moving towards the destination of her chest area.

Mother sloths sometimes assist with delivery by pulling out the young with their foreclaws. They can also be observed placing their forearms below their bodies in anticipation for their new baby.

Baby sloths can emerge out and fail to grasp the abdominal hairs of the mother. In such case, they often dangle by the sturdily built umbilical cord connecting them to their mothers. Their mother eagerly and quickly retrieved them from this position.

Newly born sloths weight less than a kilogram when they emerge. Two toed sloths are generally a few hundred grams heavier than their three toed counterparts at birth. Neonates can weigh as little as 150 grams and as much as 400g.

A litter consist of only one infant and the baby emerges fully furred, with eyes, ears and mouth closed temporarily for a brief period.

Their teeth are also formed but still slightly incomplete and premature at this stage. Teeth are peg-like in structure and dentition is homodont and monophydont: no transition from primary to secondary teeth at any point in their lives. They are born particularly with the set of permanent teeth they will use for the rest of their lives.

Sloths are born naturally strong with essential muscles already formed to support their holistic clinging. (Adult sloths are actually 3 times stronger than the average human being by the way.)

Despite this sheer strength and agility however, baby sloths occasionally loose grip of their mother’s ventral hairs and painfully crash down into the lustrous understory of the forest floors.

They may perish if their mother prove unwilling to descend from the safety of the canopies to retrieve them from the forest floors or a hungry and ferocious predator outpace their mothers to do so. They may also perish from instant impact with the floors although this is highly unlikely given the structure and arrangement of their muscles.

Sloth babies are not particularly sexually dimorphic. This means that either sex may not be easily distinguished from the other at birth.

Male three toed species with an exception of the maned sloth, eventually grow an orange-yellow speculum in the middle of their backs to differentiate with females. In the species of two toed sloths however, both sex remain in differentiable (physically) even after maturity.

Baby sloths, clinging so dearly (after birth) to the ventral sides of their mothers, are fed day in day out with nutritious milk from the two teats located on the chest regions of their mothers. They are additionally able to devour solid food like leaves and shoots at the measly age of four days.

Baby sloths learn what leaves to eat by licking the lips of their mothers. Three toed sloths in particular, stick keenly to these selections for the rest of their lives. Two toed sloths on the other hand, have a more varied diet containing additional food elements like flowers and other plant materials.

Some reports suggest that two toed sloths also feed on small reptiles like lizards and snakes, but these reports aren’t backed up by any tangible proof (other than what they wrote) and seems highly unlikely given the slow paced nature of the sloth among a few other things.

After weaning, baby sloths occasionally leave the security of their mothers to forage for food in the same tree. They feed exactly the way their adult counterparts do by pulling tree branches in close proximity to their mouth using their foreclaws and tearing juicy and succulent leaves using their tough upper lips.

Alternatively, they may feed from the paws of their mothers or be fed the leafy fragment or chewed elements from their mother’s mouth.

Paternal investment is unobserved and not present in sloths. All protection, nursing and care are offered strictly by the mothers.

After a minimum of 5 months to a maximum of one year with their mothers, baby sloths become independent, or grow the instincts to become independent. They bid a short farewell to their phelgmatic moms and migrate to new but similar trees slightly distant to those of their mothers. Females pick territories closer to their moms while males go a little far away.

A new world fraught with many challenges has begun.

Sloths mature relatively quickly, and this goes against the extended nature of their lifespan. One who matures quickly should die very early, according to the normal convention, but this doesn’t seem to apply for the sloth.

Anyways, male sloths reach sexual maturity around the age of 4 to 5, while females mature much more quicker, at the age of 3.

After maturity, the sloths teeth must have fully taken into their expected morphology of two peg shaped tooth near the frontal region of the mouth and four molar looking tooth situated at the back of the mouth with or without a considerable gap relative to the pegs. Their claws at this point must have also grown 4 inches in length and can be used effectively to defend agains predators.

The sloths are now ready to mate, now ready to begin a cycle where they were once the interesting center of attention.

The average estimate of the lifespan of sloths in the wild is currently unknown due to reasons we’ve outlined in the blogpost below. Make sure to check it out.

Article: Lifespan of sloths: How long do sloths live?

Meanwhile, their average lifespan in captivity is around the 30 year mark and their maximum lifespan is expected to surpass the 50 year mark. The median life expectancy for sloths in human care (or in captivity) is around 12 years.

Sloths despite being born in a pitifully humble manner and offered protection by only one side of parenthood can live to be someone elses’ granny after all.

Bunu. M. (2020, June 17). Baby Sloths: Everything you should know. Retrieved from http://emborawild.com/all-about-baby-sloths/