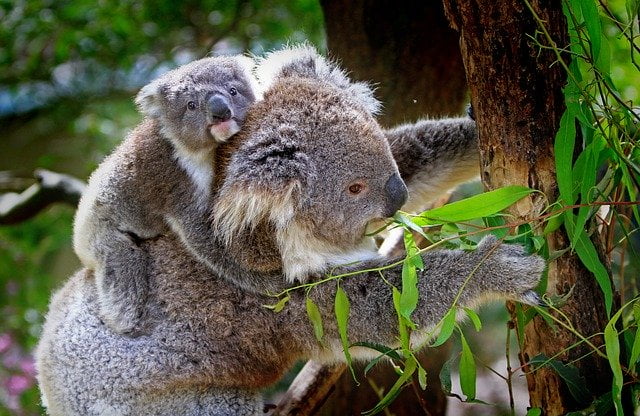 The Australian fauna is one filled with uniqueness and diversity. The continent hosts a variety of lifeforms many of which are completely natives.

For example, more than 80% of the mammal and reptile species found in australia are endemic. And not just that, at least 90% of amphibian and fish species in the universe can boastfully call australia their native home.

For a general overview of the fauna, the Australian mainland is inhabited by:

In this article, we’ll discuss some of the most notable and exciting animals species found in the beautiful continent of Australia.

The animals found in Australia

The Australian continent has a superabundant “Largest in the world” species compared to most other continents around the wold, and the red kangaroo species happen to be one of them.

These animals are sexually dimorphic, meaning that females can easily be distinguished from the males.

At this height and body weight, red kangaroos are the largest living kangaroo species currently inhabiting the face of earth, and also the largest extant marsupial currently in existence.

Red kangaroo range spreads over most part of central Australia and some part of western Australia. They inhabit the open dry, arid and semi-arid inland areas of these range.

Male red kangaroos are most notable for their ritualized fighting known as boxing. Young males try to establish dominance over estrous females and territory by standing on their hind limbs and attempting to push each other off balance by jabbing or locking forearms.

Female kangaroos are most notable for their ability to delay the birth of their baby until the previous joey has left the nurturing pouch.

As with other marsupials, kangaroos too have pouches for nursing and protecting their altricial born young until they grow and become full anatomically complete and can survive on their own.

Kangaroos in general are all endemic to australia. The other three recognized subspecies of kangaroo are:

Kangaroos are a recognizable symbol of Australia occasionally featured on coat of arms, coins, as mascots of national teams, and as logos of many Australian based brands.

Platypus are some really weird creatures. They are so strange that english naturalist opted to call them “A cleverly created hoax”, when they observed a fully preserved body in 1799, doesn’t hurt if you’re an animal though.

Anyways, Platypus and their entire monotreme kingdom differ from placentals and marsupials (the other two broad classification of mammals) in that they lay eggs to reproduce instead of give birth to their young ones alive.

But just like any other mammal, the platypus suckle it’s young with milk from it’s mammary gland after it babies hatch out from their respective eggs.

All platypus have a spur on the ankle, but only the males are capable of producing venom and delivering it through these spurs. The venom produced by the male is capable of incapacitating an adult human and killing a medium sized animal like a dog.

Platypus are carnivorous and feed on worms, insect larvae, shrimps and yabby. They are able to locate these preys by means of a unique feature called electrolocation, forming part of the handful of animals outside aquatic amphibians know to employ this means to forage.

Because of its uniqueness, platypus play an important role in the study of evolutionary biology, and with regards to the Australian continent, it is one of the most recognizable and iconic symbol of the region, appearing as mascots at national events and featuring on coins.

Koalas are also native to the Australian continent. Marsupials in general form the majority of the mammalian population in Australia, and most of them are commonly nocturnal and arboreal.

Koalas are some doll looking creatures that also operate at night. They are folivores, feeding primarily on the eucalyptus leaves and deriving all their water from it.

Koalas are heavy sleepers and can spend up to 18 hours of their day sleeping in trees while simultaneous avoiding predation and saving energy.

Pygmy bluewhales are subspecies of the blue whales that are not as large as the specific species referred to as the largest creatures to have ever step foot on earth (not exactly food is it?). But they are nevertheless not small creatures either.

Pygmy blue whales can reach bodylengths upto 24m (97ft) from head to tail and weigh a staggering 90 tonnes, only few cm and chunk of tonnes away from being crowned the largest every creature to have ever lived. The crown goes to the B. m. intermedia species stretching an average of 30 m (98ft) from head to tail and weighing an average of 173 tonnes by the way.

The dugong is a bulldog, dolphin and whale like looking creature that is medium sized and lives the waters of some 40 countries and territories throughout the Indo- West Pacific, including Australia.

The dugong is the only strictly herbivorous marine mammal subsisting primarily on sea grass communities across its range.

It uses its sense of smell to locate seagrasses (since its eyesight is poor), and then uses its tough, flexible and muscular upper lip to uproot the plants. Dugong often pile up loads of seaweeds in a common area before eating and can consume even the root portion. They often shake the uprooted plants to get rid of any sand residue.

Dugong can weigh as much 900 kg on the extreme end of the scale and rarely lower then 200 kg for both sexes. Individuals hardly ever exceed 9.8 meter in total length, and the largest individual ever recorded spanned 4.06 meters in body-length and weighed an astonishing 1,016 kg.

The humpback whale is a specie of whale notable for the attractive songs they sing as a courtship behaviour.

Humpback whales are really good vocalists, and can construct lengthy songs made up of units compiled into phrases, then organized into themes and repeated to form complex songs soothing to the ears.

Male humpbacks use their singing capabilities (alongside fighting skills) to attract females during the mating season and on the mating grounds. Males with really good compositions often have the upper hand to mate with their desired choice of females.

Humpback whales can weigh between 25 to 30 metric tons and range between 12 to 16 meters in total bodylength.

The saltwater crocodile lives in northern Australia. It inhabits saltwater habitat and brackish wetlands in this region.

It is the largest living species of crocodile and reptiles know to science with males reaching body-lengths upto 6 meters and weighing upto 1,300 kg while females generally weigh less.

Saltwater crocodiles are regarded as dangerous creatures to humans living near their habitats. They can attack and kill humans as preys as they are hyper-carnivorous apex predators.

The saltwater crocodiles feeds on a variety of animals form those inhabiting the waters they reside in, to animals that come near their habitats to drink water. They prey on whatever is available and are capable of subsisting on low amount food for days on end.

The kookaburra is a carnivorous bird native to Australia and New Guinea. It is notable for its distinctive laugh call that is often applied as stock sound effects in jungle settings of mostly old Australian movies.

The range of the kookaburra spans from humid forest to arid savanna as well as suburban areas with tall trees or running water.

The kookaburra feed on mice, snakes, insects and young of other birds.

This is the largest species of invertebrates and of crabs in the world. They are found in northern Tasmanian in rivers not as deep as 400 meters above sea level.

The giant crayfish is long lived (upto 60 years) has a maximum recorded weight of 6kg with a total body span of 80 cm.

The crayfish feeds mainly on decaying wood, leaves and their associated microbes, but can also feed on insects and rotten animal flesh.

The Tasmanian giant fresh water crayfish is listed as endangered on the the IUCN Red List due to overfishing and habitat degradation.

The cane toad is an introduced species in northern Australia. It is a true toad species, very old in evolutionary history and also regarded as the largest species of toads in the world.

The cane toad has a voracious appetite (the reason why it is introduced in some areas as agricultural pest control) and feeds mainly on rodents, insects, reptiles and birds and mammals like bats. They can also eat plants, refuse, invertebrates, dog food and household refuse. The cane toad detects its prey mainly by vision.

Cane toads are highly toxic when ingested (especially the tadpoles), and death from domestic animals and predators, and even from humans have been recorded.

The taipan is a species of snake that is fast, agile and highly venomous; they are even considered part of the most venomous snakes in the world.

The taipan is recognized in three subspecies and are endemic to Australasia.

Taipan feeds on small sized mammals such as rodents, an bandicoot.

The thorny devil is a rugged looking species of lizard endemic to Australia. It has a few other names some of which include thorny dragon and thorny lizard.

The thorny devil is a desert in habitant, mainly found in the arid scrubland and desert regions that cover most of central Australia.

The thorny devil feeds primarily on ants, and are known consume upto one thousand ants per day.

The great white shark is as endemic to the Australia continent as it is to all other tropical continents and countries of the world; It is found in the coastal surface waters of all the major ocean of the world.

Females are often larger than males and can weigh over 2,000 kg, and span upto 6.1 meters in total length. They often take upto 33 years to be able to reproduce offspring. Males on the other hand reach maturity at 26 years of age.

The sydney funnel web spider are venomous species of spiders found in eastern Australia. Their bites are capable of causing severe illness or sudden deaths in humans if left untreated.

Funnel web spiders often feed on small insects by injecting them with venoms to dissolve the prey and sucking up the remains. They trap their victims using their cobwebs.

The gippsland earthworm is a giant species of earthworm endemic to australia with a record length of 3 meterS and diameter of 2 cm.

Many invasive animal species are also found in the continent of australia most of which crossed through the borders by accidents, design or natural processes.

These species have impacted the Australian environment in many ways, all of which are adverse. Rabbits for example, infest farms and lands eating everything and render lands economically useless.

Red foxes predate and threaten the population of endemic fauna and cane toads poison native predators that seek to derive sustenance from it.

All these together, combine to pose a major threat to the goals and efforts of preserving the Australian biodiversity.

Bunu. M. (2020, May 28). Australian Animals: What animals live in australia? (with pictures). Retrieved from http://emborawild.com/animals-in-australia/