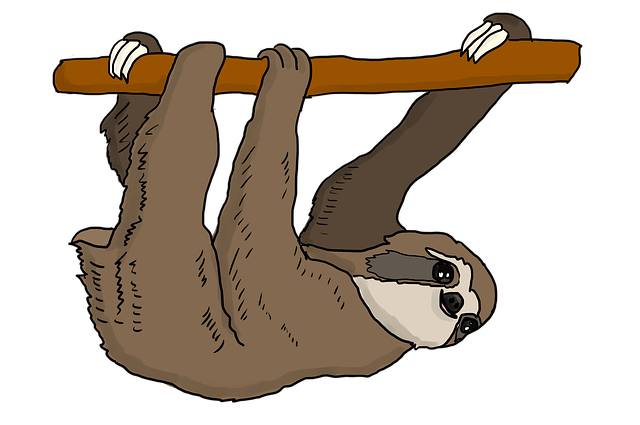 Sloths are and will continuously be the subjects of bad rap, profound speculation and idiotic misinterpretations by journalism and scientific literatures around the globe.

Haven’t you heard the anecdotes?

I doubt you haven’t, but if your answer is in the affirmative, well i have, and with a strict sense of variance and disaccord, i can testify to you that all these are nothing but shaggy-dog fantoms conjured up in the wandering minds of people.

In this article, we come to the sloths rescue, to their defense and to protect their dignity and pride. We will show you that sloths aren’t lazy but rather effected and efficient in their own way and in their own rights. We’ll also be discussing some of the adaptations that sloths have made regarding their slow paced lifestyle in the trees.

No, sloths aren’t lazy even though every aspect of their lifestyle appears to support this motion.

To be lazy means to be disinclined to activity or exertion (and here comes the important wording) despite having the ability to act or exert oneself — wikipedia.

And by this definition, sloths aren’t lazy asses, buldgers, slacker or couch potatoes because they never really have the ability to incline to activity or exert themselves.

They are nothing more than dedicated votaries flowing along with the natural law of physiology that controls their bodies.

Sloths have been ‘blessed’ and bestowed with an extremely slow rate of digestion and metabolism. And they have no other option but to flow along with this blessing in disguise as you would very soon find out.

This together with some few other factors are the reasons why sloths appear very slow (but not lazy) and lethragic (but not slothful).

To them, and in the small world that they live in, sloths perhaps are fast pacers and racers, moving at a stealthy pace that our little brains could ever comprehend.

Why sloths are slow

The number one piece of the puzzle to understand the bizarre slowness of the third most beloved social media creature is the eyesight.

Sloths, sadly, are among the numerous terrestrial creatures of the animals kingdom that have organs for eyesight but are effectively blind. Their condition is unique. It’s called rod monochromacy. It happens in humans too, about 1 in every 30,000 persons.

Rod monochromacy basically means to lack the basic cone cells in the eyes responsible for interpreting the various wavelength (colors) of light. Without them, individuals see the world in various shades of grays and become highly affected/sensitive to bright light, i.e a normally illuminated room or even the natural luminance of daytime. They are only partially sighted in dim or diffused light.

As a result of this color blindness, sloths are functionally blind in the day time and partially sighted at night or in dim light.

It is postulated that sloths acquired this regressive trait even before they broke off from their closest living relatives: the anteaters, around 50 to 40 million years ago (Cavendish, 2011, p.9) . During this period, all sloths that were roaming the surface of the earth were practically ground dwelling. The migration from ground into the trees only happened quite recently in their evolutionary history.

During this brave and successful transition, sloths were still battling with their rare genetic condition of rod monochromacy. The only way for them to survive the complex and interspersed environment in the trees was to move as little as they could as as carefully too. You obviously can’t transcode seamlessly through trees if you cant see where you are going.

The second piece of the puzzle to understanding the slowness of the sloths is in their diet. Sloths have a strictly florivorous diet spattered completely by low-calorific content, toxicity and toughness.

When sloths eat, their food supplies them with very little energy to work with. Because of the toxicity and toughness of the leaves also, as part of a much larger and complex reason, the sloths body needs to digest and absorb nutrients slowly for approprate detoxification and breakdown respectively. If you don’t already know what this spells out, it’s slow rate digestion and metabolism.

In the next section, we’ll see how the slow rate of digestion and metabolism in turn affect the overall performance of sloths.

The third and perhaps final piece of the puzzle of understanding the mysterious pace of the sloth is their physiological peculiarities.

Digestion in sloths is extremely slow and metabolism isn’t any fast either. Sloths have one one of the lowest metabolism among living mammals and they go against the normal convention that the larger the animal the longer it’s digestion rate and vice versa.

Sloths are medium sized mammals but their rate of digestion surpasses that of the average cow by a wide margin, around 10 times or so according to (montgometry 1978). It is estimated that food takes anywhere between 150 to 1,200 hours to go from ingestion to excretion in a sloth.

Metabolic rate in sloths is 40 to 74 percent of the predicted value expected for mammal their size. This means that taking up nutrients and converting them into usable energy happens relatively slowly in sloths than in other animals.

Because the main process of metabolism which drives and and maintains every bodily function in the sloths system is somewhat laggardly paced, sloth’s must therefore be naturally slow otherwise one of the commentary about them would be completely true. “Any more defect to the sloths anatomy would have rendered the life of the sloths impossible”.

Sloths low basal metabolic rate means that they live on a very strict energy budget. Everything that they do must be geared towards saving energy including their movements. They have very little energy at their disposal to fuel internal and external activities like breathing, moving, maintaining muscles, suspending from tree branches, digestion, neurological function etc.

They also eat less because of the longer period it takes to fully digest food and absorb nutrients and also to burn the energy derived from these nutrients: thanks to some superb adaptations too.

So to summarize, sloths have very slow metabolism, and as a result, their digestion rate is slow and feeding is greatly reduced. Digesta must leave the constantly filled-up stomach into the small intestine before newly consumed leaves can enter into the stomach.

All these physiological peculiarities along with the visual impairment and diets makes the sloth one of the most extremely laggard entity the word has ever seen.

Sloths have some superb energy saving adaptations for conserving the very little energy that circulates with their systems at any given time. Here are some.

1) Being mammals, but poikilothermic ones:

A vast majority of mammals are endothermic: being able to maintain and control their own body temperatures regardless of ambient temperature. Sloths once again break the rule of nature. They are mammals that happen to adopt the ectothermic or rather poikilothermic approach of regulating body heat.

Maintaining a stable core body temperature is energetically expensive and as would be expected, sloths have almost completely sacrificed the ability to do so. This saves them a lot of energy from the very little at their disposal.

As a disadvantage however, sloths must rather rely on ambient temperatures to stay warm. When conditions are cold, they body temperature fluctuates to towards the more negative end (not that extreme) and they can be seen climbing all the way to the crown of the trees to bask.

When conditions become too hot, their internal temperatures fluctuates towards the more positive end and they can be found nestled comfortable in tree bifurcation of hanging upside down and waiting for temperatures to  drop.

Sloths seem to have everything upside down, but that’s no reason to still call them the lowest form of existence.

Muscles are difficult and energetically expensive to maintain. Sloths have also made energy saving adaptations in this department too. They have a significantly reduced number of muscles compared to mammals their size. About 40 to 45 % percent of the mass expected.

This reduction helps greatly in the conservation of the little energy they have but it’s not without it’s own limitations.

Because of this reduction and arrangement of muscles, sloths are unable to support themselves on the ground and thus cannot walk or even jump. They only move forward on the forest floors by dragging their bellies on their ground with the aid of the strong retaractor muscles in their forelimbs.

Sloths, despite this reduction in muscles mass, actually have a strong configuration and arrangement of muscles that renders them strength and resilience. They are able to suspend from tree branches hours on end without getting fatigued.

Aside from being naturally slow from the effect of slow metabolism, sloths also deliberately limit their locomotion to only when necessary. This helps them conserve energy and efficiently use the remaining at their disposal at all times.