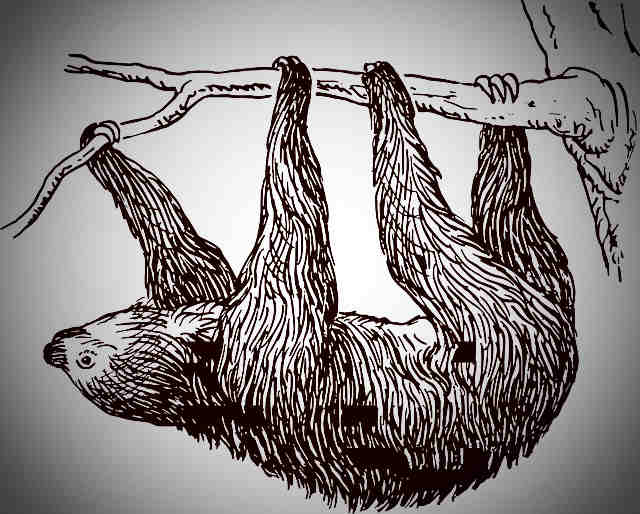 Marsupials are mammals that give birth to an altricial young to be nursed inside a pouch. Sloths are definitely not one of them!

Sloths belong to the “placental” group, which means that they give birth to their young ones at a more advanced developmental state, just like humans.

The class mammalia is made up of numerous extinct lineages as well as three extanct clades: the marsupials, montremes and placentals.

In a neat and arranged fashion, it looks something like this:

The highest level on the hierarchy (domain) classifies living organisms based on some basic shared characteristics i.e. their cell structure and how they obtain their food, while the smaller groups are based on more detailed similarities within each larger group i.e. anatomic and reproductive similarities, intra breeding capabilities and so on.

So, living organism of that share the same lower taxonomical rank are always strict relatives of one another compared with other organisms they share the preceding larger group with. And so on and so forth.

The modern taxonomical classification system consists of 8 main levels which include:

Domain >> Kingdom >> Phylum >> Class >> Order >> Family >> Genus >> Species (in the hierarchical order). Note that this system is one of the many arrangement proposed and is not impervious to change.

The three major groups of the mammalia class

Marsupials, Monotremes and Placentals form the three major groups of the mammalia class. They are the only three extant groups of this class where all other remaining groups have members that are extinct.

These three groupings classify all living mammals largely based on their reproductive pattern, although several other peculiarities exist to distinguish members of one group from the other.

Marsupials are ancient group of mammals that originated in the Late Jurassic about 165 – 145 million years ago.

They were one of the most dominant groups of mammals during that period and today they form the second most diverse clade of living mammals after Placentalia ( there are approximately 334 species of marsupials identified today; Armati et al. 2006).

Marsupials are mammals that give birth to their young ones in an underdeveloped state after a relatively brief period of gestation; about 8- 43 days depending on the species. Lillegraven (1975) claimed that this mode of reproduction is necessary for the survival of the developing embryo since allowing the baby embryo to live in the mothers womb for any longer could result in the immune recognition and rejection of the fetus.

This claim relates that marsupial mammals have not evolved the reproductive ability to prevent immunological rejection of young by the mother.

After the embryos are born, they crawl away from the mothers reproductive canal to her nipples (or teats) which are “often” but not always located in a pouch outside of her body, usually her up on her ventral side (as in the case of kangaroos and koalas) but can also be sloped backwards and downwards with an opening near the tail region (as in the case of bandicoot and Tasmanian devil).

Today, most marsupials are abundant and structurally diverse in Australia, South America and Central America, although fossil record shows that they were once more widespread. They are also the most dominant species of mammals in a single continent; Australia.

Placental mammals are the largest and most diverse clade of living mammals. Nearly 95% of all modern mammals species belong to this group.

They have history dating back as far as the Late Crecatous, which is about 170 million years ago. They consist of more than 4000 animal species and can be found nearly on all landmasses and in every ocean of the world.

Their gestation period is relatively longer compared to marsupials and can vary from few months to two years depending on the species.

The embryos of placental mammals are nourished before birth in their mothers uterus through a specialized organ called the placenta.

The placenta connects the embryo to the mother and allows for nutrient and gas exchange, waste elimination, thermo-regulation, and also serves as an immunological barrier between mother and fetus, there by protecting the child from the mothers natural immune response.

Once born, the mammal undergoes a relatively short period of lactation where it fully depends on its mother for milk and protection.

Placentals differ from their clad sisters “marsupials” in that they have evolved the ability to prevent immunological recognition and rejection of their young by the mother (the placenta partly helps with this).

The name “placenta” is derived from the name given to the dominant extraembrayonic structure (the placenta) found in the group.

The word comes from the latin word “placenta” which means, “flat cake”, because of the flat round shape of the after birth. Modern placental mammals include sloths, humans, dogs, cats, lions, armadillos, monkeys, apes, and all other related species.

Today, most placental mammals can be found everywhere on earth from land, air to the waters.

Monotremes are the primitive clade of the mammalia class. They have fossil history dating as far back into the Late Jurrasic which is about 163 – 145 million years ago.

They are less diverse compared to the other living clades and only five living species of them are extant today (spread across two families).

Monotremes differ from marsupials and placentals in the sense that they lay eggs instead of birthing their young ones alive.

The name “monotremes” stems from the fact that they have only one body opening for both excretion and reproduction.

Modern monotreme mammals include four species of platypus and one specie of echidnas distibuted in the geographic region of Australian and New Guinea.

Under each group of the three mammalian clades discussed above, there exists further classifications (just as pointed out earlier) which continues to narrow down until the lowest species level.

Here, all the mammals that share the same specie group are directly related to one another with only very little variations here and there.

Sloths for example, belong to the Superorder Xenarthra (which is one of the three major clades of placental mammals native to the Americas and distinguished by their strange joints), Order Pilosa (all living Xenanthras that are hairy in nature; which included all sloths and anteaters), and the families Bradypodidae; the three fingered sloths and Choloepodidae; the two fingered sloths.

The four extant species of the Bradypus genera include:

The two extant species of the Choloepus genera include:

Similarities between marsupials and placentals

Differences between marsupials and placentals

The differences below are pointed out with respect to the titling: (marsupials to the left and placentals to the right)