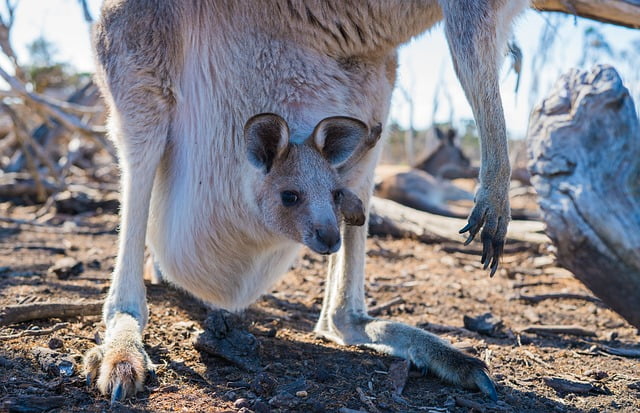 This page is all about baby kangaroos.

Here is what you’ll learn in this article:

Without further ado, lets get started.

Before any baby kangaroo comes into existence, mating has to happen. Consort pairing is observed in all the four species of extant kangaroos: where two love birds stay close and constantly glued together for as long as a week, consistently mating while foraging, traveling, resting and feeding together.

Male kangaroos are especially careful about the females they eventually end up forming consort pairs with as the nature of the short-term bonding imposes serious risks and energetic costs to them: such as the cost of courting, fending and protecting the does and also that of defending her from other interested boomers. Males are highly fond of females that are likely to produce surviving offspring.

The males on the other hand can also identify females in estrus from pheromones in their urine, often sniffing it from the ground in a process exhibiting the flehmen response: curling back the flesh of the upper lips which exposes the gum of the upper jaw while inhaling with their nostrils usually closed. This behaviour is commonly observed in horses.

Once a male has successfully identified and stalked a female with the potential of being the mother of his joeys, its time to muster up some courage and approach her.

Males (often the dominant, stronger and older males) approach females slowly and gently in order to avoid startling or alarming them. When the females affirm of their approach and presence, usually by not running away, the male proceeds to tender affectionate moves like licking, pawing and scratching her body to begin the consortship process.

Next, after some hours or days (depending on species) a strong consortship bond is built and an hour long copulation usually follows: with males inserting their bifurcated pennies correspondingly into the females’ two lateral vagina, and then depositing sperm.

If conditions are right for the female to successfully give birth, fertilization of the eggs with sperm takes place and implantation of this egg could occur in the uterine wall.

When conditions aren’t right, the eggs are placed into a state of dormancy until conditions become favorable i.e after a complete weaning of the current baby kangaroo, food becomes available, or previously severe environmental conditions return normal. The exception to this rule is the western grey kangaroo who doesn’t seem equipped with the ability to be able to delay implantation.

More matured and experienced males usually bypass fighting and the process of looking for potential mates by searching for the tending bonds held by the largest males they can intimidate.

Once they have identified such bonds, they use their more powerful and dominant figure to pursue away the male in question. Sometime fight may occur but usually for shorter duration but in a highly competitive manner. The fight occurs more like a coordinated boxing match with members trying to throw powerful jabs to thrust over their opponents.

The one who wins gets the girl, and as for the much younger male, they often avoid fights at all costs by trying their lucks on females that are not in estrus.

Kangaroos have a relatively shorter gestation period compared to placental mammals. But their gestation is relatively longer compared to some members of the marsupial family group they belong to, allowing for their young to be much more bigger, developed and advanced when they emerge out compared to these other members.

This more advanced state of embryo compared to those of other marsupials, particularly the non-macropodoid marsupials, allows and aids for a successful journey from inside the mother out from her underside and into an external pouch located on her abdominal region. We shall discuss that further as we progress.

After the very brief period of gestation comes birth of an underdeveloped neonate. The young so born isn’t ready to face the harsh conditions of the Australian wilderness and so relies on a system called the pouch for its postnatal development.

Baby kangaroos called joeys; because of their extremely small birth size compared to babies of placental mammals, are born weighing less than 1g or rather bearing the size of a lima bean.

The babies are altricial, and the fetal looking joey crawls away (in a monumental journey) from the perimeters of their mothers uterine and towards their pouch.

The pouch is basically a fold of skin at the front of the belly that has a single horizontal opening covering the mothers teats. The extra gestation period allows the baby kangaroos to begin development of their fore-fingers used for this arduous ‘climbing’ task.

When a young reaches the horizontal opening of the mothers pouch, it climbs down into the pouch (using the mothers hair and with the aid of its somewhat developed forelimbs), and attaches itself to one of her four teats.

The teat swells immediately to fasten up the joey (along with the sticky and hairless interior of the pouch) which remains there until it fully develops and outgrows the pouch.

The teat supplies the young with watery, high-protein, simple carb and germ fighting milk through out its stay. The milk becomes tailored to its specific requirements as it ages within the pouch, until it gets weaned and emerges out of the pouch.

Young ones are often born blind, hairless and deaf, with their ventral sides facing upwards while their heads popping out first.

This orientation allows for proper grasping of the abdominal hair to proceed towards the lower abdomen. The joey’s crawling actions is strictly governed by instincts and in no time, it is able to crawl towards abdominal the pouch mostly unassisted.

Kangaroo pouches are designed with a horizontal opening towards the mothers upper area since joeys would easily fall off if the opening was positioned the other way round or similar to that of the wombat and marsupial mole.

The interior of the pouch is hairless and this helps provide a skin to skin contact and therefore warmth to the naked neonate for development. The ability to tighten and expand and also the sticky interior also ensures that neonates are fastened properly to their chosen teats.

Just few days prior to the birth of a neonate, the mother kangaroo cleanses and sterilizes the interior of her pouch by licking. This eliminates any scraps and dirts and provides a sterile environment for her soon to emerge joey to thrive.

The kangaroo pouch is lined completely with powerful yet flexible muscles and ligaments that give it the ability to expand and contract to support the developing embryo. This is especially useful in times of danger to prevent young from summersaulting out of the hammok-like entity.

Growth of a kangaroo joey

After about some weeks, the joeys record a significant development in their jaw areas which enables them to disengage from their respective teats and suck milk at will.

Joeys suckle and remain completely enshrouded within the perimeters of the pouch for about 6 to 7 months straight, after which they begin emerging out on a periodic basis in order to familiarise themselves with the external surrounding.

At eight months or so, joeys have grown to about the size of a large house cat, about a thousand times greater than the average weight they started at.

At this size and age, the young vacates the vicinity of the pouch but still remains at the sides of its mother, depending heavily on her to learn survival and foraging skills. In their groups called troupe, court or mob, baby joes recognize their mothers by their scents.

Lifestyle of a kangaroo joey

While in the pouch, joeys do not defecate or urinate until they feel their mothers tongue on their bodies. The mother occasionally dips her head into the embryo bearing pouch to clean the interior off dirt and also to give her baby a nice tongue bath.

While at it, baby neonates defecate and urinate on their mothers tongue (an extremely minute sized reproduction) which the mother consumes affectionately.

At the age of 18 months, the mother kangaroo weans and abandons the joey she once cared and carters for with all her life.

It’s now time for baby joey to upgrade into the next cycle of life and become a subadult.

The early maturity period in some species of female kangaroos means that a joey could effectively be pregnant while still suckling milk from her mother.

Some species of kangaroos can consistently mate but suspend the implantation of the fertilized eggs immediately after or two days after their joeys have crawled up into their pouch and fastened onto a teat.

When the joeys attains 8 month of age, the suspended egg is then implanted into the walls of the uterus and birth occurs immediately after a month or so. New joey can then suckle at the same time with the older joey sister or brother, before their weaning.

In this case, the mother is able to make tailored milks for both form of joeys but the newer and much younger joeys will not be able to suckle from the teats his/her older siblings use due to the larger tip size.

Bunu. M. (2020, July 22). Kangaroo Baby: Everything you should know. Retrieved from http://emborawild.com/baby-kangaroo/