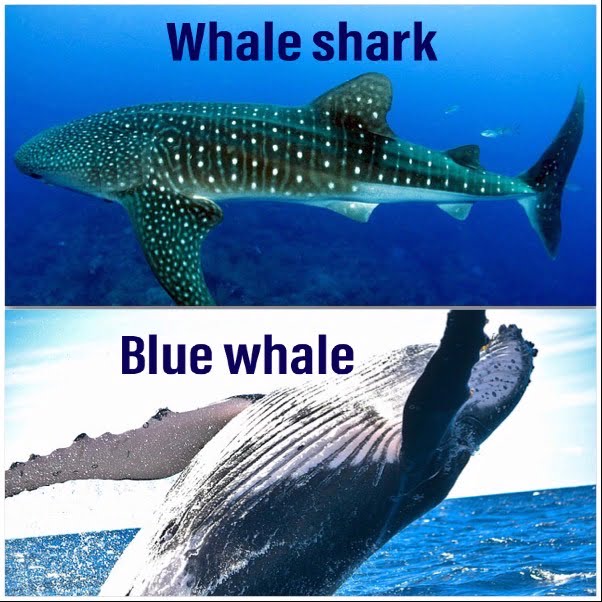 The blue whale and Whale shark: two of the most iconic species currently surfing the open waters of the tropical oceans. In this article, we give a head on comparison of these two distinct remarkable in order to find out the respective ways in which they differ and how much similarities they both share.

Now that we’ve seen the quick differences and similarities between whale sharks and blue whales, let us dive a bit deeper into each comparisons in order to expand our grasp even further.

The foremost difference between whale sharks and blue whales is the animal class that they each belong into. This major difference forms the bedrock and basis for all other dissimilarities that are going to be presented below.

Both whale sharks and blue whales are proud members of the Animal kingdom but they each belong to a separate class within this broad group. Whale sharks are classified as fishes under the shark group whereas blue whales are identified as mammals, marine mammals to be specific.

There are several peculiarities: both morphological, physiological and even reproductive that are used to distinguish between fishes and mammals. We are going to mention them further down the list as a continuation of the head to head comparison.

Under the fish group, three broad categories exist, they include:

Whale sharks are classified under the cartilaginous group of fishes under the famous branch of species known as sharks. So whale sharks are sharks and all sharks are fishes. Now over to blue whales, the mammalian class is split up into three major categories which are:

Whale sharks belong to the placental group which are set of mammals that develop a specially built organ called the placenta used for nurturing and protecting their embryo during gestation.

Whale sharks are marine mammals to be specific meaning that they live and thrive solely in aquatic habitation. Bringing them on land would be an effective way of killing them.

Useful resources for comprehending the above context

Breathing is a crucial activity necessary for the survival of cells and of all animals (or living things). Both whales and whale sharks employ different breathing methods in the oceans.

Whales, being mammals, surface to the open air to catch breath since they use lungs (which is characteristics of most mammals) for respiration, whereas whale sharks, being fishes, employs gills to filter out dissolved oxygen form water for intake.

Whales use blowholes on the top of their heads as noses for sucking up oxygen and can renew as much as 90 percent of the air in their lungs in one breath. Humans only renew 15 percent.

Whale sharks on the other hand have 5 large gill slits located at each sides of their head regions for expelling out water drawn in using their mouth, after the oxygen has been sufficiently filtered out.

Whales being mammals require large amount of oxygen to fuel cell activities. Whale sharks on the other hand, being fishes and therefore cold blooded animals, require very little amount of oxygen to remain active. The reason why they‘ve evolved the inefficient gill respiring method (from the oxygen absorption perspective).

Whales adopt a choice of vertical strokes with their tails when swimming as opposed to the horizontal strokes observed in whale sharks and all other fishes and also in crocodiles.

The choice of vertical strokes in whales is one of the strong evidence of their descendant from a terrestrial mammal that moved their limbs in a vertical plane.

If the mammary gland happens to be a modified sweat gland; apocrine gland to be specific, and not a modified sebaceous gland, then whales would also have sweat gland which would be another distinguishing characteristic between whales and whale sharks.

As of date however, the dispute between scientist regarding the identity of the mammary gland still persists and thus the information gap on whether or not whales have sweat glands is still wide open.

Anyways, whales have mammary glands for suckling their offspring with nutrient rich milk after birth and and whale sharks do not.

All fishes are either oviparous or ovoviviparous and most mammals are viviparous, with the exception of the living monotreme clade.

Oviparous means to give birth to young ones by laying eggs externally.

Ovoviviparous means to produce young ones through eggs that are laid internally, the eggs are usually the main source of nourishment for the developing embryos.

Viviparous means to give birth to live young ones and nurture the embryo using any means other than laying internal or external eggs, i.e usually by means of a placenta, a specially built organ that nourishes and protects embryos as they develop inside their mother.

Whale sharks are ovoviviparous whereas blue whales are viviparous, just like we humans. Whale sharks can lay up to 300 eggs inside their bodies and give birth to large litters-of pups at a time.

Blue whales, being mammals, which means that they must nurture and offer full protection for their young ones only give birth to a maximum of one pup per breeding season, about 2 to three years.

Gestation period is between 10 to 11 months and weaning takes place after 6 to 8 months.

8) Nuturing of young ones

Fishes are unsolicitous towards their young ones, and so are whale sharks. They give birth to fully developed young and immediately abandon them to fend, forage and offer protection for themselves against large pelagic predators.

Whale sharks on the contrasting end of the continuum, nurture and offer protection to their young for lengthy durations between 6 to 8 months or until they can fully stand on their own.

They suckle their newly born calf with milk containing very high amounts of fat which cause them to grow significantly in size; they gain about 10 pounds per hour and a staggering 250 pounds per day for the first few month after birth.

Baby calfs follow their moms wherever they go for protection and more importantly to learn the different tricks and skills needed to forage and survive in the inhospitable atmosphere of the oceans.

By the end of the weaning period, baby calves must have attained lengths and mass large enough to naturally intimidate their predators and for them to also be able to live on their own.

They grow up to 16 meters in length and weigh more than 50,000 kg. Nurturing and fending for young ones are all characteristics mammalian species including human beings.

Here comes the big one. Both whale sharks and blue whales are an extremely enormous species. Their expanse and mass are simply beyond words and out of this world.

But where one species is the champion of all fishes and non mammalian vertebrates surviving on both land and in water, the other is the largest possible species to have ever live on the surface of the earth!

Whale sharks can span a maximum total length of 20 meters from head to tail and weigh an impressive 35 tons. Blue whales on the other hand are incomparable.

Extremely large species can stretch more than 12 fully grown humans (at 30 meters from head to tail length) and weigh a shell shocking 150,000 kg.

The average length and weight of whale sharks is 9 to 12 meter and less than 10,880 kg. For blue whales, the smallest species spans nothing more than 20 meters in length and weigh around 50,000 kg. Still bigger.

Both whale sharks and blue whales adopt the same feeding strategy and forage. They both feed on planktons using a method known as filter feeding.

It involves swallowing of large amounts of plankton rich water into the mouth and then filtering out the food from water using pads located near the pharyxn.

Fishes evolved before any other living vertebrates. They are actually the first ever vertebrates to have stepped foot on earth. Their history dates as far back as 450 million years ago.

Whales in general, evolved from a four-legged terrestrial mammal about 50 million years ago, over the course of 5 to 15 years.