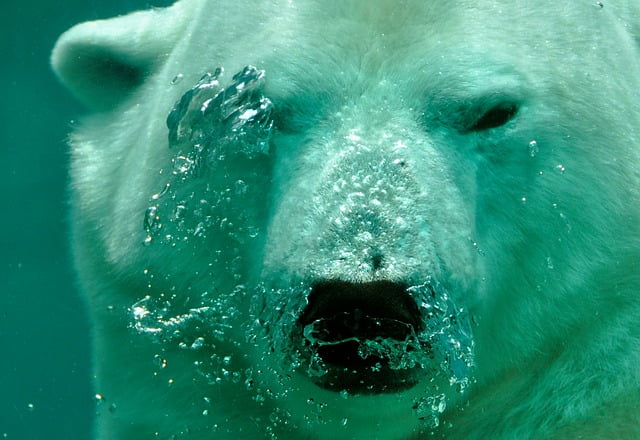 This article discusses extensively about the swimming capabilities of polar bears.

Yes, polar bears are perfectly capable of swimming for short and extended distances and also for hours on end or even days at stretch. Polar bears can additionally dive impressive meters underwater and play around within the chilliness and biting cold after a physically tiring activity.

In the next sections, you’ll learn all about the how’s and why’s of a swimming polar bear.

How do polar bears swim?

Mostly like a dog. Polar bears employ the dog paddle style to mostly swim short and extended distances. They often use their large paws measuring nearly 30 cm across for propulsion. Scratching your head for what the dog paddle style means? Don’t worry, we’ve got you covered.

Dog paddle style: This basically means to run through water — just as any quadrupedal mammal would trot on land. As expected, this would involve lying on the chest, and moving the fore and hind legs alternately in a manner similar to how four-legged animals run on land.

Aside the dog paddle style employed by polar bears for swimming, bears can also roll around and back swim in waters and they can also tumble over different sides often using bergs rooted deeply into the seas to perform this maneuver.

Bears love their non-migratory swimming times on the arctic waters. It’s just like private apartment owners having the time of their lives in their backyard pools.

Why do polar bears swim?

Polar bears swim in order to migrate to newer places or to find food. As arctic sea ice in some regions of the Arctic regularly melts during the warmer summer months, and given the fact that polar bears also depend heavily on these sea ice as platforms to hunt for their favorite food of seals, some polar bears dwelling in these type of habitats often embark on a painfully long and arduous journeys to destinations where sea ice remains constant and melt-less all year round.

This ensures that they able to consistently feed through out summer and not have to fast for the most part like their counterparts we are about to discuss next.

While polar bears in some regions migrate by swimming to places where biological productivity is pronounced throughout summer, some due to the nature of their habitat are forced back onshore or to a near by island to endure a prolonged period of fasting, otherwise informally known as “fasting season” until the next freeze-up in fall occurs where bulk of sea ice forms and polar bears can now use them to hunt for their primary preys; seals.

Polar bears migrating as a result of retracted sea ice and therefore inaccessible food resources are often forced to spend most of their time swimming through open water to their destination rather than relying on ice packs like they do in colder months; as a result of the melting up completely or almost completely of ice on the sea.

Females that have fed exclusive and voraciously during the ultimate feasting period of the spring months and are therefore ready to implant their fertilized eggs also migrate off shore or to near by islands to build dens for their winter dormancy. This is where they will give birth during the winter (while sleeping).

They may also swim continuously through open waters to their land destinations or use both swimming and ice pack platforms depending on how summer warms up the waters in their habitats and affects the sea ice there.

Polar bears can also swim in order to forage for food. Not all polar bears observe aquatic stalking but some are very good at it. In the winter and spring season and even during the summer in some places where sea ice never melts completely, polar bears hunt seals continuously using these sea ice as a platform or to their advantage.

Aquatic stalking simply involves bears diving deep into waters and stalking seals resting on ice floes. They use the water medium as a means of camouflage in order to closely approach their preys, then, they quickly surface out of the waters to pounce on the oblivious animals.

In some areas where only small ice floes are found across the waters, seal can still use these mediums to bask or rest and still be able to escape stalking polar bear due to how small the ice packs are.

Polar bears rely heavily on sea ice for hunting since they are really poor hunters themselves when it come to catching seals in the open waters.

Their primary preys can easily out swim them in the open so they rely heavily on raiding birth lairs and stalking seals resting in ice foes to hunt them.

Aside seals, polar bears can also dive to forage for other marine resources such as seaweed, sunken cadgers and kelps.

After a bloody meal, polar bears get all stained in blood and seal oil, and so they often dive to completely wash these stains and impurities off their pelages. Polar bears do not only wash up after a blody meal, they may occasionally dive in for a bath when they feel the need to.

Aside from bathing, polar bears can also swim in water to cool off during hot summers days or after an extremely intense physical activity like playing or fighting, as polar bears quickly over during these activities and also when temperatures rise above 10 degrees in the arctic.

Taking a deep soothing dive into the waters is essential to prevent them from over heating.

How far can polar bears swim?

Migrating polar bears often swim the farthest. Most bears can easily swim over 50 kilometers at stretch and the longest distance ever recorded was a continuous 700 km (430 miles) journey spanning over 9 days by a determined mother bear.

She ventured out the impossible with her yearling but made it on land without the cub. She neither stopped for food nor rested throughout journey, relying heavily on her body fat reserves for sustenance and swimming energy.

Migrating bears often take a break on sea ice when they set their eyes on one. They may also use this platform to forage for seal before setting up to continue their journey.

Bears foraging for food in sea studded with ice often swim the shortest. They effectively cover as much as 45 to 50 meters in waters or even more depending on whether they are able to make a kill or not, or depending on the willpower of the hunting bear generally.

How fast can polar bears swim?

Polar bears typically cover around 10 kmph (6 mph) while swimming at maximum speed. In comparison, their average walking speed on land is 5.6 kmph (3.5 mph), and their running speeds can clock up to 40 kmph (25 mph). This slow speed relative to the maximum 30 kmph of their primary seal prey is the reason why they are really poor hunters in the waters.

How long do polar bears swim?

Polar bears are really strong swimmer and excellent divers. They can dive to depths below 5 meters easily and the longest dive on record is 13.9 meters performed by a female polar bear under experiment.

Polar bears mostly dive to aquatically stalk on their prey. When sea ice isn’t as pronounced or the bear feels he/she has a much higher chance to kill a bearded or ringed seal compared to when they decide to stalk them on land, they may choose to adopt an aquatic camouflage to carefully approach their resting preys by diving towards them. Then, they quickly pounce on them to make the kill.

The longest duration for a polar bear dive without surfacing to catch a breath happened for 3 minutes 10 second. The distance covered by the stalking bear was around 45 to 50 meters (148 to 164 ft).

Polar bears often close their nostrils while diving underwater to avoid accidental inhalation of water into their lungs.

How can polar bears swim in freezing water?

Polar bears can swim in freezing water because they have a thick layer of fat measuring over 11 inches or 4.5 cm thick to serve as insulator.

Their pelages don’t really do much when they submerge underwater and in fact only serve as a poor insulator. So bears rely heavily on their thick adipose tissues to maintain buoyancy and remain warm in the frosty conditions of open waters.

Cubs emerging out of their maternal den mostly cannot swim in the open waters as they have short, thin hairs and very little layer of fat developed under their skins.

While the short and thin hairs are sufficient enough to insulate them from outside exposure, the lowness in fat reserve and the poorly insulate nature of wet pelages means that they run the risk of hypothermia when swimming.

Mother bear often rely mostly on sea ice platforms for transit back offshore after emerging out from their dens. This ensures their cubs are only exposed for very little durations in the frigid waters.

Yearlings or baby polar bears closer to their first birthdays however, are by that time, well equipped with sufficient body fats and thicker body hairs for immersions in open waters. They can comfortably swim for distances under a dozen kilometers and still come out fine as they were before submerging.

When do polar bears learn to swim?

Baby polar bears learn to swim before their first birthdays. They are often deliberately forced to cross through water paths by keenly following their moms, but for shorter distances supported by rests on sea ice.

With time baby bears develop more on their body fats and pelages and are then able to effortlessly swim alongside their mothers for longer distances.

How much energy do polar bears use?

One research estimated that polar bears consumed as much as 5 times their walking energy when they swum longer distance in the open waters.

Bears that swum longer distances reduced in body mass by up to 25 percent and cubs that followed died as a result of starvation after completely depleting their fat reserves.