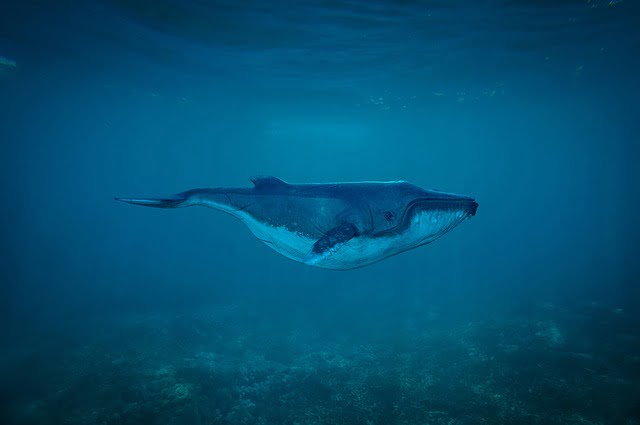 Whales aren’t fishes but mammals, so how come they are able to survive the depths of the oceans for an entire period of a lifetime? Can they breath underwater perfectly fine like fishes and most other aquatic lifeforms do or is there a specific tactic they use to dodge the breathing constraints imposed by their mammalian nature?

No, whales cannot breath underwater. The reason is simple. Whales possess lungs instead of gills or permeable skins which physically exaggerates their inability to extract dissolved oxygen from the ocean waters and use it for respiration, unlike they way fishes and other aquatic lifeforms are able to do.

Every animal needs oxygen in order to fuel cell activities and the process of absorbing oxygen into the body is basically known as respiration or breathing. Different classes of animals have different modes of breathing which often but not always corresponds (in way of adaptation) to the type of environment they inhabit.

As you might have guessed correctly by now, animals that live strictly in aquatic environments have separate breathing mechanism from those that live in a terrestrial setting, simply because the key element ‘oxygen’ required for breathing is readily available in different ways in these environments.

Aquatic animals must first wait for oxygen in air to dissolve into water so they may use their specially built organs (often known as gills) to filter out this oxygen and absorb it for their consumption. Consuming the oxygen gas bonded with the hydrogen to form water would never work, thus the need for their gills.

Terrestrial animals on the other hand inhale oxygen directly from their surrounding air and disburse it round the body using their specially built organs known as lungs.

Exchanging both classes of animals into the opposite corresponding habitat would (in most cases) be an effective way of killing them.

Whales are strict inhabitants of marine environments and they belong to a specific group of animals known as mammals. One of the striking characteristics of animals belonging to this group is that they possess nostrils and lungs which they use to sift out oxygen from the surrounding air and respire with it.

A majority of mammals are terrestrial and the ones that inhabit marine environments (for example whales, porpoise and dolphins) likely had ancestors that migrated from land into the seas. As such, and despite the fact that whales are wholly water-resident, they too must swim all the way to the surface of the ocean in order to catch a breath.

‘Breathing’ directly from underwater would be practically impossible since the design of the internal linings of their lungs is most suited for air rather than water and the organs themselves do not even have enough surface area to absorb as much oxygen needed to fuel a warm blooded body as large as a whales’.

Whales are able to survive longer periods without breathing as a result some terrific adaptations they’ve evolved ever since their ancestors migrated into the seas.

Exchanging the lungs for some gills?

Even if we were to exchange the lungs of whales for the gills of fishes, they still wouldn’t be able to survive on that simply because they are warm blooded.

They need very large amounts of oxygen in order to keep their cell activities going. The only reason why gills work perfectly of fishes and most other aquatic lifeforms is because they are cold blooded animals and thus have a very low demand for oxygen to fuel cell activities.

So the little oxygen they are able to extract out from the waters using their gills (a process which is indeed very difficult and arduous) can go a long way to sustain all their needs.

How do whales breath?

All whales must swim to the surface of the ocean to catch a breath. If for some reason they are unable to do so, then they run the risk of suffocating (not drowning) due to lack of fresh air, just like any human being would when their air passages are shut off.

At sea surface, whales exhale first before inhaling using blowholes (or nostrils) located at the top of their head.

They use force to exhale old air out from their lungs which appear as blasts of misty water droplets called spouts from miles away.

It appears so because the warm moist air arriving from the blowholes hits the outside air and condenses to become vapor, thus appearing misty to the eyes.

Whales can renew about 90% of air in the lungs with each breath which in comparison to humans is a pretty massive figure since we are only able to renew 15% of the air in our lungs.

They are able to absorb such enormous amount of oxygen by storing it in their muscles. Different whales spout differently and this feature can be used to distinguish one species from the other.

Blowholes are tightly shut underwater and are located on top of the head to provide an efficient way for breathing on water surface. Some species of whales have two blowholes on their head for respiration.

The science of breathing in whales

When whales surface to the open ocean to breath, they voluntarily contract muscles around the blowhole which cause it to open, then they breath, and on the reverse, the relax the muscles which cause the blowhole to shut completely. Whales are unable to breath using their mouth because their digestive system and respiratory systems have no connection at all, unlike in terrestrial mammals like humans. This makes sense since they may likely run the risks of gulping water into their lungs while feeding underwater.

Whales are capable of holding their breath underwater anywhere from 7 minutes to 2 hours, depending on species. When they surface for a breath, they usually take about 1 to 2 breath per minute while traveling at the surface with each breath session lasting only one-half of a second.

How do whales know when to breath?

The brain keeps count of rhythmic breath schedule, and when its time, it triggers breathing response which cause them to travel all the way to the surface to breath fresh air.

This perhaps is the reason why whales never fall asleep completely in the oceans. They must keep one side of their brain active and the other half inactive for some period while sleeping, and then alternate them in successions. This enables them to be on alert always and be able to respond to dangers or be triggered in a breathing cycle when it’s due.

How are whales able to hold their breath underwater?

Whales are able to hold their breath for longer durations, even longer than many terrestrial mammals for a number of reasons.

Why is oxygen even necessary to begin with?

Oxygen is necessary for survival. Without oxygen, cell activities in the body will cease and the entire being will perish.

Oxygen helps cells to generate energy which is needed for the proper working of every single bodily function, for example, digestion, working of brain, respiration and walking.

Bunu. M. (2020, May 9). Can whales breath underwater?. Retrieved from http://emborawild.com/can-whales-breath-underwater/