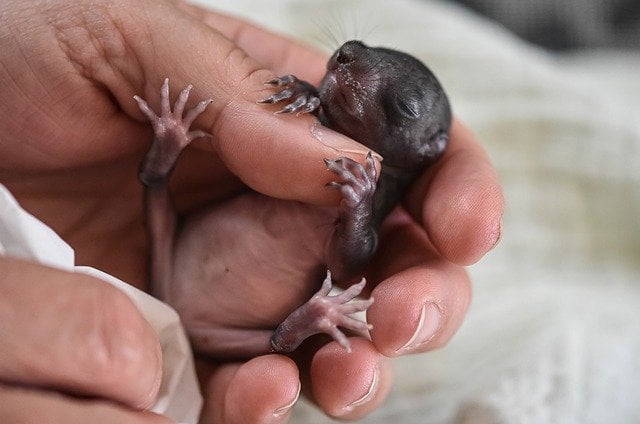 Chipmunk babies don’t take forever to transition from fetus to adults. They only need warm milk, cozy burrow and timespan as brief as a whoosh in order to perform the magic. Their birth is as swift as the colorful stripes that run along the length of their backs and weaning alongside maturity happens like it never took place in the first place. A flash!

Keep reading to discover all there is to know about chipmunk babies and entertain yourself with the cute, endearing and adorable pictures of chipmunk babies we’ve piled up for you in the end.

Courtship in mature chipmunks is centered on cent cues, visual display and “courtship chatter”– the shrill, repeated, birdlike chirp that female in estrus produce in order to attract potential mates.

More than one interested male party usually ends up being attracted to the chirp which lasts anywhere from ten to fifteen minutes, and thus, competitive edge is only guaranteed for the strongest and most intimidating of the pack.

Males after mating with a certain female, also go out in search for potential partners elsewhere. So both sexes aren’t monogamous or non-promiscuous and neither do they stick with a certain click of females each and every mating season.

Mating in chipmunks, depending on species, happens in winter, in spring and/or in summer as well. On calendar, that‘s a span from February to mid June.

Some species in favorable years can breed twice in a year, bearing and birthing one litter in fall and another in summer. A typical example is the eastern and western chipmunks of the southern United States.

During winter season, all chipmunks retire into their well-constructed intricate burrows in order to take shelter from the biting cold, and in spring, males emerge out first, eagerly anticipating for receptive females emerging out from their dens one or two weeks later.

When females emerge, mating takes place soon after because they enter into estrus within a week or two and are only receptive to males for a couple of days. Just imagine the level of competition.

After the chirp call of the female, and show of dominance by the males (if more than one is present), the lucky guy who gets to mate with the “doer” continuously jumps around her in order to set her in the mood. Following that, the female becomes very interested and transitions into a squatting position.

The male then mounts on her from the rear and preforms 12 to 24 quick thrusts. Mating can last for as long as five minutes and as little as 15 seconds depending on species, and is usually characterized by intermittent breaks between each thrust sessions. All of the above showdown usually take place near the vicinity of the females burrow. She’s the hot cake, so she set the rules!

Gestation (or rather pregnancy)

Gestation in chipmunks lasts for about a month after copulation. Sperm meets eggs and fertilizes it, and females become pregnant for the duration of 25 to 40 days depending on species. For example, the Siberian chipmunk have a gestation period of 28 to 35 days whereas the least chipmunk gestate for 28 to 30 days.

After a complete gestation, it’s time for birth. Females retire into their burrows, lay on their dorsal sides, on their buttocks, on either of their sides, or continuously rotate between these positions with legs spread out wide to support birthing.

As the babies begin to emerge one after the other, (one litter can contain three to six babies depending on the species), the mother chipmunk continuously lick the naked, deaf and blind entities clean. Babies emerge with ventral side facing up and buttocks first.

Baby chipmunks despite being born blind are still able to locate their mother’s teats in order to fasten on them. They tumble around, and even bumble one another in the process! That’s something interesting to marvel about!

Care for chipmunk babies: What do baby chipmunks eat?

Baby chipmunks are cared for by their mothers and rarely by their fathers or in collaboration with them. Care and nurturing of young ones is one of the many typical characteristic of members of the mammalian class i.e humans.

Baby chipmunks are fed with warm and rich milk for the entire period of four to seven weeks depending on species.

Mother leaves them in complicate burrow to forage for food and comes back to the nests to store and feed. She needs the nutrients present in the nuts and fruits she brings home to be able to produce sufficient and quality milk for the babies.

This in turn will aid in their proper and fast development as they open their eyes and ears towards the end of the month and begin to grow hairs including the distinct stripes in their bodies few weeks later.

Mother chipmunk licks her babies clean when it’s time for grooming and teaches them to defecate and urinate in corners specifically designed for such acts in the burrow.

After four to seven weeks, depending on species, baby chipmunks are weaned and they thus, venture out from the burrow alongside their moms in order to forage for real food. Scared and argus-eyed, baby chipmunks follow their mom’s track wherever she goes and learn what she eats and where she drinks.

They also learn how to construct burrows by assisting their moms to do so or to repair their current one. Within the span two weeks, baby chipmunks must have mastered the art of being vigilant and escaping from predators and therefore have learnt how to survive and live on their own.

In the coming weeks, mommy chipmunk either sends her children packing or leave their modal burrow to construct a new one for herself.

In as little as a year, in late summer or fall, baby chipmunks attain their adult sizes. Most are ready to breed the next spring (thats around one year on the dot), but a chunk of population also prefer to breed in the second year.

The once vulnerable neonates rivaling the weight of an afro comb have now transitioned into fully grown adults and are now ready to introduce altricial ones of their own into the wilderness.

Try resist saying awnnnnn!! if you can!

Bunu. M. (2020, October 18). Chipmunk baby: Everything you should know. Retrieved from http://emborawild.com/chipmunk-baby/