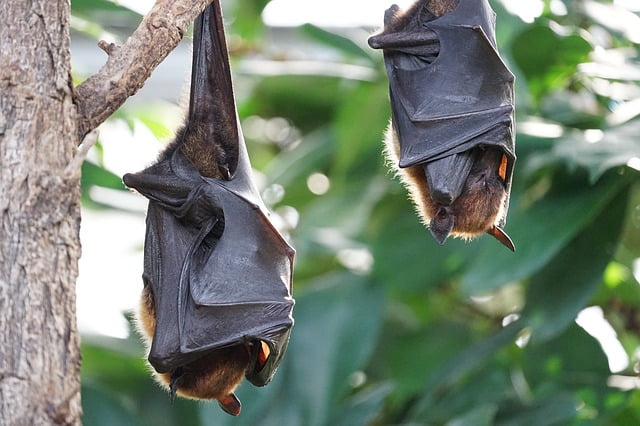 Come early December, the snow will rain, the insects will vanish, the blood will crisp, the fruits will shrink and the blood-sucking, insect-eating and fruit-gorbing bats will? Do something thoroughly and completely relaxing of course, keep reading to discover what exactly that is!

Yes, a colossal species of bats inhabiting the arctic and temperate regions of the world hibernate during the winter season.

They retire mostly into optimally chilled but humid atmospheres and remain periodically dormant until the productive climate of spring approaches.

For the remaining species of bats that avoid hibernating amid the intensely frosty and barren climate of the winter season, they adopt the second option of migrating alongside other courageous pals to warmer and more productive areas.

They can spend upto several thousand kilometers traveling on flight but their morphology and physiology appear to be more than capable of ‘manning up’ to the arduous task.

Migrating bats alongside other flight-bound travelers like birds and insects have a more pronounced advantage over their terrestrial counterparts.

They can easily avoid landscape barriers such as mountains, rivers and lakes and consequently cover equal distances relatively quickly that most terrestrial migrators such as deers or caucus would.

Flight migrators in addition to the landscape advantage, are also more naturally adapted to cover farther distances than terrestrial migrators.

Migrating bats remain active in the warmer areas they migrate to for the entire period of winter. Then, they return back to their normal habitat in spring.

They adopt their characteristic lifestyle of being effectively dormant in the daytime and revert into stealthy hunters at dawn.

Northern Bats usually migrate towards the southern hemisphere, near sub-tropical or tropical climates.

Why do bats hibernate?

Bats hibernate in order to avoid the savage energy constraints presented by the winter season. When ambient temperatures of the arctic and temperate regions plunge down dramatically to near freezing or even below freezing conditions during midwinter, it surfaces with two main problems for all animals inhabiting these zones.

First is the problem of increased energy requirements critically needed to maintain a normal body temperatures. Our bodies, including those of other mammals like bats, rodents and apes, naturally incur the tendency to give off more body heat during periods of colder climates than in warmer ones.

This means that more energy (or food) is required to maintain body activities and internal temperature at optimal conditions during winter than in summer: because our relatively hotter bodies eagerly give off internal heat to the much cooler and colder ambient surrounding.

This is basically what the second law of thermodynamics says: that heat transfer occurs spontaneously only from higher to lower temperature bodies. The energy requirements of a winter body can bundle up to two folds of that in summer.

Next comes the compounding problem of the barren nature of winter. This basically means that food resource become extremely scarce as a result of the mostly infertile climate.

Vegetations crisp, insects retreat, preys migrates and predators that choose not to follow their preys or adopt a more feasible survival strategy are left to perish on a cold sunken stomach.

For northern bats in particular, their diets majorly consist of foods that become regressively scarce during winter: fruits and insects. Going out to forage for these food, sometimes buried/concealed underneath snow, soil, cervices, or even ice isn’t an energetically affordable expense either.

They may spend hours on end searching for food, dissipating energy and becoming weak, and then end up with insufficient discovery or virtually nothing at all.

So the only viable option for them is to enter into a state of hibernation. Remain practically inactive for the most part of winter in order to conserve the little energy they have.

How do bats hibernate?

Hibernation in bats happens pretty much like it does in every other hibernating mammal. Deposit sufficient fat reserve that can last throughout winter and search for dens before winter approaches, then, retire full force into this den when winter approaches and live off this body fat until spring sets in.

Bats begin their fat store accumulation around late autumn or so when food density have reduced drastically from it’s peak in mid-summer. Temperatures have also reduced significantly relative to mid-summer levels around this time.

This significant reduction in food in late autumn poses a serious constraint to the hibernating bats: foraging extensively to accumulate enough body fat that can last them throughout winter becomes nearly impossible.

As an alternative, they use an energy saving mechanism to build on their current fat reserve even while their food intake has greatly reduced.

Here’s what they do. When late fall approaches, bats abandon their summer roosting sites which are generally warm and comfy structures, and preferably select more cooler places (about 10 degrees or so) to temporarily roost before moving into their winter hibernation sites.

In these cold roosting sites, the bats temporarily reduce their physiological activities in the day time for periods up to 14 hours or so. This reduction in activities is also termed as torpor. In the night, the bats go out and try their luck for a forage.

This behaviour significantly reduce the energy expenditure of the bat by a great degree compared to when it chooses to roost in a warmer place and maintain normal euthermic conditions.

With the little food they able to find along with this drastic reduction in energy consumption on a daily basis, bats are able to gather enough fat reserves even while they have very little resources to feed from.

Bats hibernate in underground spaces such as caves, mines, tunnels, cellars and bunkers. They can even use house attics to hibernate.

While hibernating, bats live primarily off their body fat reserves. They begin searching for hibernating dens after depositing enough fat reserves to last them throughout winter. Bats enter into hibernation around early november or so.

Studies have show that bats can significantly reduce their metabolic rates by upto 99 percent. This enables them to survive on very little energy reserve until spring.

During hibernation, bats periodically arouse and return their bodies to euthermic conditions. All hibernating animals do so and the reason why such arousal occurs still remains a mystery to the scientific community.

While awake, bats do not feed, urinate or defecate. They simply awaken to stretch their bodies and return back to dormancy after some few days. Frequency of arousal in bats can vary from few weeks to as long as six months on a stretch depending on individuals and on species.

Bats awaken around early spring when productive vegetations have arrived. They abandon their roosting sites and resume normal biological activities and lifestyle.