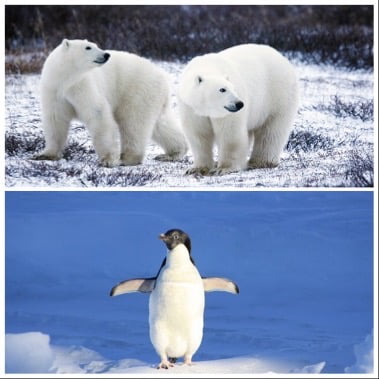 The imperfect equivalent of polar bears trying to sustain on a penguin diet is that of an Icelander ‘flying’ all the way down to South Africa for a Pannenkoek breakfast and then returning back home the same day before twilight sets in. Then again, he does this repeatedly for several days in a week, several weeks in a month, and many many months in a year!

Simply unimaginable and downright impossible — unless you have something to argue?

These two can never meet in a natural setting and so the thoughts of polar bears making a tantalizing prey out of penguins can only happen as a figment of our wandering imaginations.

For clarity sake, here is the definitive answer.

No, polar bears do not eat penguins. As an interesting matter of fact, they can’t. The reason is distance. Polar bears are 11,500 miles away from tasty penguins or vice versa.

You never for once thought penguins would make prey out of polar bears when they met did you?

If you are really interested in what polar bears eat in their natural range of the arctic circle, then make sure to continue reading this article until the very last word.

What do polar bears eat?

The primary means of sustenance for polar bears are ringed and bearded seals. The former seal comes first and the latter is a manageable alternative.

The massive size difference between the two seal species is the primary reason why such preference exists.

Aside seals, polar bears also enjoy plant materials, human refuse, bird chicks, carcass and even marine life as large as the beluga whale and walrus. Males can also readily transition into carnivores; feeding on baby polar bears fathered by individuals other than themselves.

Polar bears only resort to these food items when their primary diet of seals have become dwindled, for example, during summer in many part of the arctic where sea ice retreats or melts and polar bears are forced off shore to look for food.

Polar bears are actually the most carnivorous members of the bear family. They are tagged as hyper-carnivorous since a whopping 70 percent of their diets are are made up of animal flesh. Actually, more than 70 percent according to statistics.

How polar bears hunt for seals in the wild

Polar bears hunt for seals using a combination body camouflage, acute sense of vision, good hearing and extremely accurate sense of smell. They can easily sniff out seals from nearly 1.6 km away and buried under 3 feet of snow or water.

The platform that polar bears use to hunt seals are sea ice, and as such, their range are limited to areas in which part of sea is covered with ice for much part of the year.

In these habitats also, polar bears are most abundant in shallow water areas near shore and in other areas where currents and upwellings increases biological productivity significantly (activities of seals).

The prey of polar bears (seals) occur in different species. They include the bearded, ringed, harped and harlop seals. Some species like the ringed seals are much smaller than polar bears themselves while others like the hooded and bearded seals can grow to rival their sizes or even surpass them.

The most frequently preyed form of seals are new born cubs (born in spring) and young that are less than 3 years old. These mostly fall victims as a result of their natural naiveness with regards to predatory avoidance.

The most widely used hunting tactic of polar bears is called still hunting. In this technique, a polar bear detects the breathing hole of a seal using its excellent sense of smell and crouches nearby to waits patiently for the seal to surface.

When the seal surfaces to catch a breath, the bear smells its breath, quickly pounces on it and drags the body onto the surface of the sea ice for the kill. Polar bears have patience, so they can wait for several hours even after failing to catch seals on numerous occasions.

Another hunting strategy of polar bears is to stalk seals that are basking alone or resting with their pups on sea ice, relying strictly on the white background and their transparent body hairs for camouflage.

When they approach a pouncing distance without being noticed, they quickly rush towards the victim and attempt to go for the kill immediately.

The third hunting strategy of polar bears is to raid the subnivian birthing lairs of mother seals and try to make a meal out of the nurser- mother or any of her cubs, often the cubs.

Polar bears kill their preys by crushing their skulls with their long, penetrating canine teeth. They firmly secure the slippery seals with their black, short and strongly curved claws and quickly try to reach for their heads almost immediately.

After a successful kill, polar bears begin to devour their meals. They reach for the huge, tasty blubbers (fat) located directly between the skin and underlying muscle tissues and consume it almost immediately.

These digest more easily and account for 50% of the entire calorific value of the seal carcass. Other parts such as muscles and meat provides less amount of calorie.

The faster a bear is able to consume the fatty portions of a seal carcass, the more calorific return it gets in the shortest amount of time possible.

So even if the bear gets driven away by a much more powerful and violent adult, it has already gained as much calorie as the pursuing adult can ever assimilate from the remaining carcass.

After consuming the tasty blubbers of seals, polar bears, if unchallenged or driven away from their kills will proceed to consume the protein-rich red meat located underneath the skin.

Polar bears generally do not bother to prey on terrestrial mammals as they quickly overheat their bodies when they chase after them and are often outpaced by most of them to begin with.

But if for some reason, they are able to pounce and win a lucky meal, polar bears would readily devour the body parts just as they would a seal carcass. Only that they get a tiny fraction of the fat content they normally get on seals.

Terrestrial preys mostly associated with polar bears are reindeers and bird chicks. Their meat are highly digestible and can partially but not completely supplement for the huge fatty diet of marine seals.

Plant and other materials

Apart from terrestrial animals, polar bears can also consume plant materials such as berries. They can also consume insects found at the bark of trees and also feed on human refuse and bird eggs when they are readily accessible and seals are not.

Some polar bears prefer to fast in periods of seal scarcity until the productive waters return.

Polar bears, aside their primary prey of seals can also prey on larger marine animals such as walruses; often the injured or sick adults but mostly juveniles, beluga whales and carcasses of whales and other blubber rich marine mammals.

Accidents and injuries associated with hunting mostly occur with unskilled polar bears which are mostly young and sub-adults; those still learning hunting and survival skills after being weaned and attaining independence.

Seals like all other prey animal being harassed and tormented by their predators will try as much as possible to flee away at all cost. When confronted by polar bears, seals bite and thrash in response to these attacks in order to force a loose grip.

This meager defensive tactic is only effective when the prey animal is an adult and the predator polar bear is a sub-adult. Adult seals can easily cause injuries to unskilled bears in sensitive areas like their eyes, nose and mouth. This can take forever to heal and can cost bears a lot including their lives.

Fasting and feasting in polar bears

Polar bears throw feast when there’s lots of food to eat; many many seals to kill and feast on. This period corresponds to the stretch from winter throughout spring and can even be as long as a whole year in some areas.

The ultimate feasting period happens in spring when mother seals have emerged out with their pups and are constantly basking on sea ice. So lots of naive and carefree babies to choose from.

In areas where there is limited supply of food year round, for example in areas where sea ice melts completely during summer and seals disappear with it, polar bears are forced to come off shore and forage for terrestrial food or fast for the entire period of summer until sea ice begin to form late fall and provides them with platform to hunt seals again. Polar bears usually swim for most part of their journey to land.

Not all polar bears have to fast. Some live in areas where sea ice never melts for the entire duration of a year and thus have access to the sea on a yearly basis. Melting is now becoming a reality in these areas though due to the depletion of the ozone layer; adopt a greener lifestyle whoever you are reading this article!

Others live in areas where sea ice melts completely during the summer and individuals are forced off-shore to fast for periods upto four months or until the next freeze up occurs in fall.

While on land, these bears continuously forage for terrestrial food that are highly unsustainable while relying heavily on the thick fat reserves they stored up during spring to survive.

Polar bears living in regions where they are constantly forced to fast and are unable to gather enough fat reserve during spring can perish before the next freeze up happens. Young ones are mostly the victims.