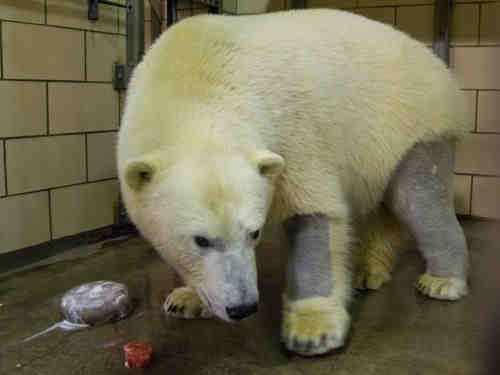 It’s strange, but yes, polar bears have black skins as you can see from the picture above.

The purpose of this black skin is yet to be established by the scientific community, but a majority of researchers suspect that the black skin may help confer some sort of heat gain advantage by allowing the bears to readily absorb solar radiation from their external surroundings.

It’s a well known fact that darker colors naturally absorb more heat radiation than lighter ones simply because they absorb more light energy from the sun, it wouldn’t be surprising if polar bears actually evolved darker skins in order to effectively maximize their heat absorption in the mostly frigid and cloudy atmosphere of their habitats.

This advantage can work hand in hand with other physical and physiological adaptations to help them stay warm and cosy at all times.

In the next section, you’ll learn more about the polar bear adaptations to their naturally frigid and intense habitats.

Polar bear adaptations to the Climate of the Arctic

Polar bears are northern bears that live and thrive in cold conditions. Their habitat lies within the arctic circle of the Northern hemisphere which is marked by an average summer temperature of less than 10 degrees F and winter temperatures below freezing, that can also drop to as low as -58 degrees F.

In order for polar bears to efficiently thrive in such savage and harsh conditions of the polar arctic that persists for more than half of the year and gets even worse during the winter season, polar bears evolved some unique behavioral and physical adaptations to deal with the cold. Here are some of them.

Polar bears have thick coats of insulated fur to prevent them from loosing internal heat to their external surroundings. And this external coat is so effective in doing its job that polar bears are more likely to get overheated in arctic than freeze to death.

Yes, you heard that right, polar bear can easily get over heated at temperatures over 10F or when they run over long distances or engage in intense activities like fighting for potential mates.

Polar bears are actually more densely and evenly furred than any other species of bears in the world. The reason is quite obvious actually: to protect them from submitting to the biting cold of the arctic.

Polar bears are completely furred in all areas of their bodies except for the tip of their nose.

The structure of the pelages

The thick external coats of polar bears is made up of two layers of different hairs which include: a shorter, softer and more thicker layer of underfur completely enshrouded by a long tapered guard hairs of varying length.

Both the guard hairs and underfurs of polar bears lack pigments for causing color and are therefore appear transparent when examined closely, but only the guard hairs contain a microscopic hollow core at the middle just like an empty straw, which scatters visible light within and give the polar bears their characteristic white or creamy appearance, depending on the angle you view them.

This type of coloration is referred to as structural coloration as opposed to color imposed by pigment because it is the hollow structure present in the guard hairs that is responsible for their whiteness and not pigments as observed with the human hair.

The underfur of polar bears does most of the heat retention work and the upper guard hair are mostly there to primarily protect the underlying lower underfurs.

The costs if polar bears additionally help to camouflage them in the predominantly white background of their habitats as they hover across ice and snow in search of ringed and bearded seals to pounce on.

In addition to their heat resistant body suits, polar bears also have thick layer of fats lying directly underneath their dark pigmented skins to help them stay warm and cosy at all times.

The thick layer of fat can stretch up to 4.5 inches in depth and can additionally help prevent swimming polar bears from experiencing the frigid cold of the waters where their coats serve as poor insulators.

Polar bears are actually strong swimmers and they use their large foot pads to paddle their way in the waters. Polar bears can travel hundreds of miles from shore by combination of sea ice surfing and swimming. They do so often to migrate to more biologically productive areas.

Polar bears develop thick sized blubbers mostly during their ultimate feasting season which occurs during the seal pupping season of spring. They consume the fat rich blubbers of their seal prey (particularly the newly born pups) and deposit the energy as adipose tissues in their bodies.

When the feasting season fades out and the fasting season which mostly stretches from mid summer to mid fall sets in, polar bears rely mostly on these adipose tissues to generate energy and remain alive. So the more a bear is able to gather during the feasting season, the more their chances of survival is increased.

Note however, that not all polar bears living within the arctic circle experience periods of fasting, so live in areas where food persists all year round while some migrate to biologically productive areas when food scarcity becomes pronounced.

In the winter when obtaining fresh water comes with the energetic cost of melting snow and ice, polar bears often rely on the metabolism of their adipose tissues which releases metabolic water to quench their thirst.

Polar bears develop furs even under their foot pads especially during the winter. This helps secure their purchase on slippery sea ice surface and also adds and additional layer of insulation between their foot and the substrate of snow and ice.

Polar bear foot pads are made up of the same cornified epidermis material found in other bears.

To further minimize heat loss, polar bears have shorter and rounded ears and their tails are short and compact. These help prevent heat loss via extremities.