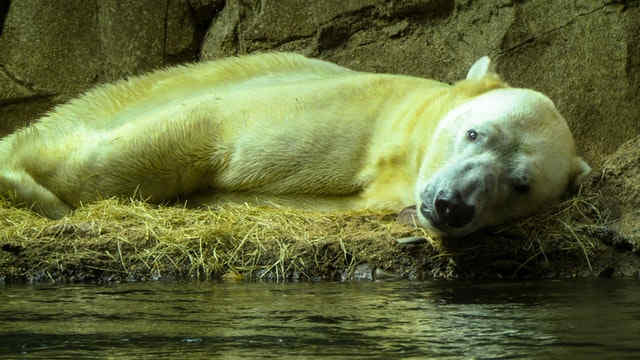 During the frigid days of winter, many species of Northern bears are found curled up (like stiff balls) in a partly insulated den, and snoring out their lungs like avid drunkards do in the early hours of morning.

They are, for a substantial amount of time, totally oblivious to their external surroundings and whatever third party it accommodates.

This phenomenon is called winter hibernation and the american black and grizzly bears have been clearly observed to do so. Even their pregnant individuals, those with cubs, and those nursing only themselves have been observed to partake in this seemingly enjoyable activity.

But do polar bears, who are just another species of Northern bears positioned slightly far northwards along the lines of constant latitude do it?

Do they observe hibernation in winter or do they go about their normal businesses as they would if winter never interrupted summer?

This article brings forth the results of a detailed investigation into the hibernation status of polar bears in their natural environments. You’ll find answers to all your polar bear hibernation questions, plus more.

Polar bears do not hibernate during the winter season. They remain active all year long, rotating from aquatic sustenance to terrestrial ones as seasons alternate.

In periods where food scarcity may persist, often during summer and early stretch of fall, polar bears resort to their stored fat reserves (amassed during the feasting period of spring) to generate energy and remain active.

Polar bears are built for the arctic

The primary reasons why animals go into hibernation is to avoid the harsh weather conditions of the cold winter months and dwindling food resources that often accompany it. For these reasons, animals turn down their principal body functions in order to strictly conserve energy and be able to survive through winter.

They enter into a state of suspended animation (more like dead versions of themselves), and occasionally rouse to stretch, feed, defecate and return back to near ‘demise’. All these physiological changes and incredible seesaw between life and death are effective strategies to survive the huge limitations presented by winter.

As virtually the entire population of wild polar bears are dispersed across the ice-covered seas of the Northern hemisphere: the extremely cold climates of the polar Arctic, it seems quite inevitable for them to enter into a state of hibernation during the extra frigid conditions of winter in this region, especially given the fact that most northern bears adopt such behavior in their respective habitat.

In contrast however, polar bears do not hibernate during winter at all. They remain active and go about their everyday business like many non-hibernating animals do.

Together, these two adaptations offer polar bears the ultimate solution to the biggest winter problems that many animals solve using hibernation. To better understand how these adaptations work, below is a concise breakdown of each one of them.

Almost all (true) hibernating animals struggle to keep the normal balance between their body’s heat production and loss during the winter season — one of the reasons why they enter into hibernation in the first place.

Most of them are small and therefore have relatively large surface area to volume ratio which increases their potential for heat loss. Whenever they engage in any physical activity like walking or foraging, they radiate a lot of body heat compared to animals that are much larger and bigger than them.

Most hibernating animals also lack any effective thermal insulation to regulate this huge amount of energy they give off to their surroundings. As a result, they have no other option but to adopt an energy-efficient strategy that strikes out the negative balance between their heat generation and loss, and at the same time guarantees their survival by the end of winter. This energy-efficient strategy is of course hibernation, which turns down their bodily functions and limits their behavioral activities, eminently.

As for polar bears, they have very little to worry about when it comes to conserving body heat generated within their bodies (even as Arctic winter temperatures plummet down to -50°F and stay that way for several days or weeks).

Polar bears are completely and densely covered with fur except for the very tip of their nose. They are actually the more densely and evenly furred of all species belonging to the Ursidae bear family.

Their fur consists of an upper guard layer of long varying hair and short fuzzy layer of dense underfur. These two layers of hair are clear and hollow in nature and they help trap warm air against their bodies and prevent them from feeling the ice-cold breeze of the winter.

Aside from the two layers of fur regulating their body heat loss, polar bears also have a uniformly black skin over a thick layer of fat that can measure up-to several inches in length.

The thick under-layer of fat serves as an effective thermal insulator alongside their body fur, whilst the black pigment of the skin is expected to confer them some heat gain advantage. The thick layer of fat also serves another function, it helps keep their bodies warm underwater where their pelages act as poor insulators.

Polar bears additionally minimize their body’s heat loss by having a relatively low surface area to volume ratio (or by being large), and having small round ears and short compact tails.

Most animals that end up hibernating during the winter season do so for an additional jointed reason that they are often faced with a shortage of food supply and a high energy cost of acquiring this food. Their dormant state is the only option to evade this energy constraints and all the drawbacks eventually presents.

For polar bears however, there’s a very slim chance of running out of food supply during winter. The reason is simple. Their hunting grounds of sea ice (which retracted northwards during the summer) returns back in full form during winter. These hunting grounds of sea ice are used by aquatic seal for resting and reproduction, and it is on this grounds that polar bears are able to pounce on them for their hugely tasty blubbers.

The only true period when polar bears are faced with a shortage of food supply is during summer and early fall. Their hunting grounds of sea ice retreats northwards as the result of the warming climate and their prey animals of aquatic seals disappear with them too. (not that they actually migrate together with the waters, but polar bears wont have any medium to access these seals until the next freeze up brings forth hunting platforms for them).

During this periods of hunting inactivity, polar bears return onshore and begin a season of fasting, living off the body fat reserves they accumulated earlier in spring until the next freeze-up happens in fall.

Some polar bears may prey on terrestrial mammals and birds while ashore and when they run out of fat reserves or the hunger becomes excessively unbearable. This period of fasting can last for several months in polar bears and may only be interrupted when hunting opportunities are in sight.

Note: Not all species of polar bears experience complete melt down of sea ice during summer. Other live in areas where sea ice never melts, and so have a consistent supply of food year round. Another set of polar bears may choose to migrate to productive places rather than return off shore and fast until the next free up. In this case, they too will rely on their fat reserves for buoyancy, insulation and to survive the periods of famine bound to occur while traveling. They often stop by any yet to freeze sea ice to rest and try their luck on seals.

Scientist used to refer this off shore fasting as walking hibernation, but that doesn’t seem to be the case any more. According to paper put forth in 2013, polar bears undergoing fasting had very different body conditions as hibernating mammals and very similar conditions as those animals deprived of food. (The opposite of the view which was held before).

Their metabolisim dropped only slightly less (as would be the case for any mammal that is fasting) and their heart beat too only reduced by a little fraction.

This discover lead to the abolishment of the so called walking hibernation theory for the more appropriate phenomenon of fasting.

This incredible ability of polar bears to go months without eating any food offers solution to the ’lack of food’ challenge faced by many hibernating animals.

Polar bears are able to avoid hibernation by having an effective thermal insulation and incredible fasting capabilities.

Both male and female polar bears remain active during winter to carve out hunting opportunities for sustenance.

As for pregnant polar bears, they often transition into a state of lethargy, spending the entire winter fasting in dens excavated in snow. Their winter timeout more closely resembles hibernation than fasting, as their physiological funtions are depressed slightly more than expected in a fasting bear. Thus, the phenomenon in pregnant females is often used interchangeably with the term hibernation and in a more strict sense with the term “light hibernation”.

Pregnant bears have the longest ‘fasting’ periods of any polar bear; having the ability to go without food and water for up to eight months while gestating and giving birth as well.

During this period, the pregnant bear depends solely on her fat reserves to survive and nurture her cubs when she give birth to them.

While they are being gestated, the thick fat blubber offers warmthness to them and when they are born naked and blind, the perfectly insulated carved-out dens alongside the warm underside of the mothers offer most of the protection until they develop their own body furs.

Pregnant females emerging out of their dens can loose as much as 15 to 27 percent of their body mass due to all the nurturing and fasting. Mother’s often forage heavily and gain weight and this weight is even reflected in the offspring at birth.