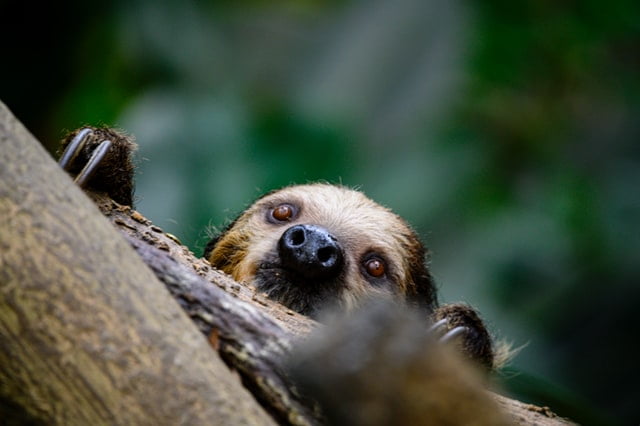 We’ve seen it all. Animals that look gentle and endearing yet deliver the bite of a thousand horses. Centipedes, soldier ants and our beloved canine companions; dogs and cats are typical examples.

On the flip side also, creepy looking animals that ‘d rather take a blow to the head than deliver a bite to the human body also exist too. They are too many to start listing out here.

Sloths, well of course, are the type of animals that fall somewhere in between. We could say that they are cute and we could also say that they are scary, but we could never really say that they look intimidating since they move around like belly crawling four year olds. Quite slowly actually.

In the strange spectrum consisting of the placid and savage, where do sloths lie? Do they bite humans unhessitantly when provoked or do they appear calmer than calm even in the wake of extreme annoyance?

In this article, we’ll learn just about that plus more: the sloths teeth profile and real life incidents of sloth bite attacks that have been documented.

Sloths are absolutely capable of inflicting dreadful bite on their assailants. They possess prominent conoid teeth that lack outer enamel covering; which makes them wear out easily, but are strong enough to jab through tissues and leave holes that are sizeable enough to be seen through with the naked eyes.

Forget sloths aren’t predators, they have large pointy teeth that are tubular and homodont in nature 1

Their teeth, unlike those found in humans, lack a tougher outer covering called enamel which protects against physical and chemical deterioration and offers strength for grinding and chewing.

In compensation, the teeth grows continually throughout the animals life, offering a manageable balance between growth and wear.

Sloths feed mainly on tropical leaves and foliage so their teeth continuously wear out due to the tough fiber compositions of these diets.

In addition to that, the homogenous nature and simplicity of the sloths teeth and also its rootlessness (among a few others), makes it difficult to identify dental homologies with the teeth of other mammals in different taxa. This means that scientist are unable to pinpoint exactly which other animals (the non-Xenarthra ones) sloths share the same ancestors with.

Their ever-growing dentition also means that they do not transition from milk to permanent teeth at any stage in their life. They are effectively monophyodont; born particularly with the set of permanent teeth they’ll bear for the rest of their lives.

Sloths comparatively have fewer teeth that are weaker but larger than those of humans. Their dentition also contrasts greatly with the complete lack of teeth in anteaters and the supernumerary teeth of armadillos — the remaining members of the Xenarthra group that sloths belong into.

Both living families of sloths (the two fingered and three fingered sloths) possess a total number of eighteen permanent teeth arranged in a framework of ten upper teeth and eight lower teeth (a dental formulae of 5/4, counting only the teeth that reside in the half plane of each upper and lower jaw).

The two upper and lower front teeth are caniniform in nature, while the rest of the teeth that stretch deep into the rear mouth are molariform in nature.

Three toed sloths have a closely packed tooth row that almost entirely lack spacing (diastema). The individual tooth also take the shape of moderate pegs. Two toed sloths on the other hand, have an enlarged, chisel-shaped caniniform tooth at the front of the dentition isolated from the rear molariforms by a significant gap.

Sloths lack front incisor teeth for tearing up their meals of tropical leaves and foliage. The space there is essentially empty. As a result, they employ their tough upper lips for this purpose. They chew with their cone-like molariform teeth and swallow by moving the food backwards with the aid of their large tongue.

Sloths are passive animals that understand the language of solitariness more than anything else. They are lone wolves that live alone, feed alone, sleep alone, and if they could…, they probably would choose to mate with themselves and reproduce alone.

A sloth would hardly ever start a deliberate attack against its own individual let alone with other animals or even the apex predator — we humans. They are like the bullied fat kid of a middle school, they need a cogent reason to attack, and when they muster up the courage to do so, they do so savagely.

Adult sloths do not hesitate to strike back when preyed upon, harassed, or when their young ones are disturbed. The ways in which sloths can be harassed by humans include, hugging, stroking, grooming and other activities that will force physical contacts with them.

Sloths can bite in the wake of these annoyance and it happens very quickly. They simply rush towards their aggressor, grab their arm, pull it into their mouth and bite savagely.

The bite of a sloth can root deep into the skin and leave dints that are large enough to be seen through with the naked eyes. The pain can last for several weeks whilst the wound is easily prone to infections.

Keep scrolling down and you’ll see what the aftermaths of a sloth bite looks like.

Venom is an ancestral feature among all mammals, but sloths, unlike their extremely distant relatives, the slow loris, platypus, the cuban selonodo (almiqui) and other venomous mammals do not have a poisonous bite. They live in trees where they are consistently surrounded by food at virtually every angle they turn, so they don’t need any venom to “kill leaves and feed on them”.

The bite of a sloth is non-venomous but can be very painful and is easily prone to infections.

The Slow loris is the only primate on the face of earth that is known to be venomous and is capable of inflicting a ‘killer’ bite.

Sloths claw and hiss in response to attacks where they do not feel like biting. They can also stretch out their arms to look bigger, transition into a self hold position and remain still to fool aggressors into thinking they arent there or are dead.

Sloths posses four inch claws that are curved and strongly built. They can inflict nasty scratches on the body of their aggressors with just a simple swipe. However, just like their painful bites, their claws and body fur do not contain any venom that would transfer into the body and act  immediately on organs.

Two fingered sloths are generally more aggressive compared to their cousins the three toed sloths. They will not hesitate to strike back primarily with their claws, first, before biting, when they feel harassed or threatened.

Three fingered sloths often remain frozen when approached by predators in anticipation that they go unnoticed. When they predator is doesn’t buy the trick, for example humans, they too will try to make for the escape and only resort to their meager defensive repertoire when cornered or rushed.

Sloths do attack, and it’s a reality. In order to give you an idea of how pissed-off the slowest mammal on earth can get when provoked, we have compiled an abrupt list of stories, images and videos that document real life sloth attacks. Enjoy!

This video is obviously tampered with because sloths do not voice out like that when provoked. However, it still portrays to an extent, how greatly sloths dislike being approached and handled by humans. The sloth in the video is of course, a two toed sloth!

In the video below, a man attempts to isolate a three toed sloth from its modal tree but ends up with a savage moment that he’ll remember for the rest of his life. He got bitten on his right hand! Update: Unfortunately now, it seems the video has been taken down by the publisher. Too bad you couldn’t witness the fun.

This is what a sloth bite looks like. The picture was posted by a sloth owner claiming her beloved pet sloth did this to her. 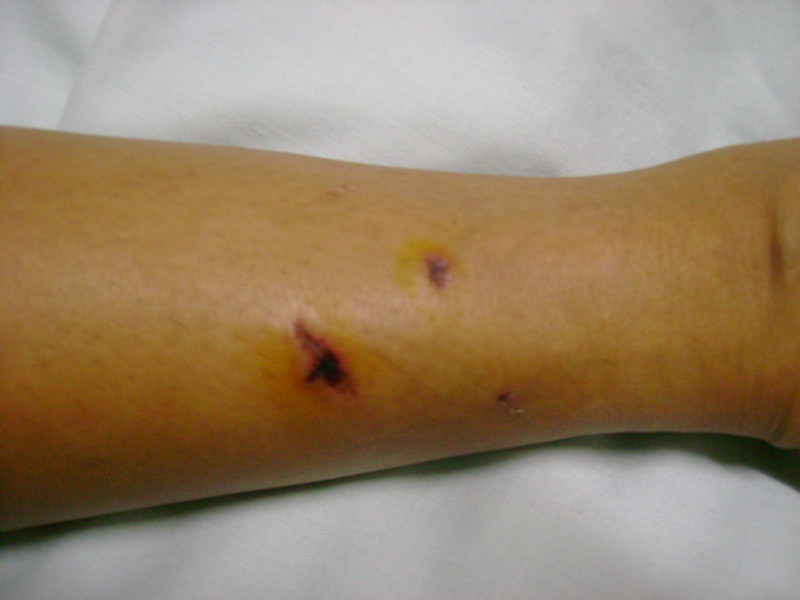 Donald E. Moore is/was a sloth biologist who works or worked at the Smithsonian’s National Zoo in Washington, D.C,. During an interview he had with the award winning group blog — Boing boing, Moore narrated how he got bitten by a female three toed sloths on one faithful day. He recalled how one minute, the individual was upside down along a vine (at a reasonably safe distance away from him) and the next, she had paced the distance between them, grabbed his arm into her mouth and bite savagely.

Sloths have teeth that are arranged in a fashion where the sharper ones occupy the front part of the dentition, while the flatter and much larger grinding ones are located at the rear part of the mouth. Their mouths are missing incisors for tearing food items though.

Despite being the slowest mammals on earth, sloths are perfectly capable of inflicting a dreadful bite on their aggressors. They execute this bite using the peg-like tooth located near the front of their mouth.

Sloth bites are not poisonous and neither are their body fur or claws. Their bites instead, are deep, painful and easily prone to infections.

Sloths bite when infuriated and do not care whether its their own, a predator, or a gentle human trying to interact with them in a friendly manner.

Next time you set out to provoke an adult sloth, just remember that those terrifying looking ‘cones’ will certainly bite off more than they can chew!