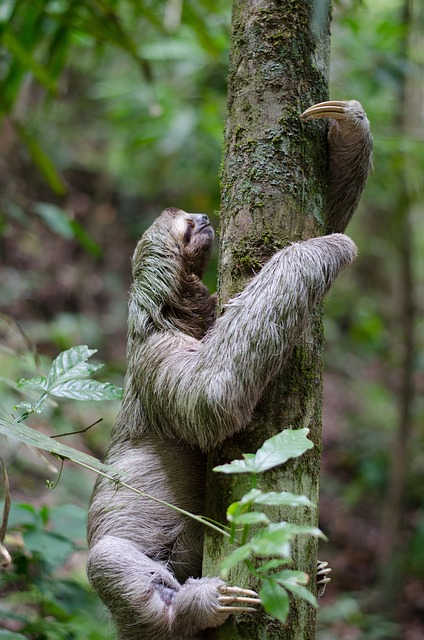 Okay, to clarify a bit, no animal ever dies when they poop, but for one particular reason (that isn’t directly tied with the actual popping process itself), sloths happen to be an exception.

This isn’t the first time that sloths deviate from the norm! Being quadrupedal mammals, sloths cant walk and neither can they hop or jump, and being animals worthy of being tagged as average sized mammals, sloths still consume way less the amount of leaves that a similarly sized howler monkey devours in a single day!

But thats by the way, and you should defer the links for later, for now, let’s find out why sloths die when they poop.

Do sloths die when they poop?

Sloths do not die from mere pooping. It’s their weird bathroom habit of climbing down to the base of their favorite tree (to take this dump), that exposes them to a great risk of depredation with little chances of survival.

Their predators are of course felids like the amazon jaguars and ocelot, and also sharp sighted birds of prey such as harpy eagles and hawks.

Pooping with a predator

Once every week, a sloth descends from the safety of the rainforest canopy to defecate at the base of its favorite tree.

For starters, this constitutes one of the very few occasions that sloths expend their very little energy and risk their valuable lives for a trip down the forest floor: an inhospitable destination for any mammal that is both poor-sighted and slow-footed like it.

Not to mention the meager defensive mechanisms that aren’t there to help matters at all.

During this energetically expensive trip, sloths become easily vulnerable to attacks from their natural predators, with minimum chances of survival.

Pauli and Peery (2013), documented that more than one-half of all adult sloth mortalities they observed in a field study they conducted, happened as a result of depredation events when sloths were at or near the forest floor.

Understandably, lethargy and futile defensive mechanisms were the greatest impediments that these animals faced when confronted by their predators. You cant twist and turn against a felid whose pace is as fast as a thunderbolt, especially when you’re a sloth!

For any sloth specie; two or three fingered, high up the tree canopy is their unassailable home. Torpidity alongside their algae infested pelage, combine to confer them invisibility.

They become notoriously difficult to distinguish from a clump of decomposing leaves or a lichen-covered bough.

And in such manner, they make a fool out of the most observant predators and ultimately keep them at bay.

As accommodating as it is in the highest layer of the tropics however, sloths are virtually helpless on the forest ground.

Their algae-covered pelages are unable to deceive predators anymore, and their defensive techniques of clawing and biting barely matches the ferocious energy of their hunters: the harpy eagles and big cats.

Their low pitched hiss of course, only ends up vexing the predators even more and therefore aggravating the attack.

As if to deemphasize the arboreal basis of their anatomy, sloths lack the necessary joint muscles and stability to be able to support their body weight using their limbs. They drag their body by hooking their foreclaws to a hold, and pulling themselves forward using their strong retractor muscles.

As obvious as it seems, any living creature predated under such circumstance and also condition, is as hopeless as a child eagerly stretching their arm in an attempt to reach for the moon.

Sloths are tree-dwelling mammals that are primarily folivorous. Three fingered sloths are strictly adherent to this diet whereas the two fingered variety have a more flexible means of sustenance: they eat shoots, fruits and flowers in addition to their primary diet of tropical leaves.

Sloths feed from more than 40 different tree species and prefer to eat from branches that have fresher and younger leaves (they are softer to eat and contain the most juice).

They feed by hooking the tree branch with their fore or hind claws and bringing the leaves in close proximity to their mouth. Then, they tear the leaves using their tough upper lips, chew with the aid of their rear molariform teeth and swallow by moving their large tongue continuously in a backwards fashion.

On completion of the chewing and swallowing process, the leafy diet which is tough to digest and super low in calorie content is sent down to their four-chambered stomach for further break down. (Sloths are actually similar to pigs, cows and other ruminant animals in the way their stomach’s are structured).

In the stomach, the tough leafy fragments (mostly made up cellulose and water), are acted upon by microorganisms to break down into substances that provide nutrients for the blood stream to carry. This process is referred to as digestion and it takes forever to be completed in a sloth; the reason why they only visit the bathroom once a week!

Sloths, particularly the three fingered sloths have the slowest metabolic rate of all mammals currently known and as a consequence, their digestive system is constantly ‘asleep’.

Food takes 10 times longer to pass through a sloth than it does through a cow; according to Sunquist (1978). Their stomach is constantly full because of this slow rate of digestion and accounts for 20 to 30 percent of their entire body mass prior to defecation.

When the sloth’s lengthy process of digestion is completed, it’s flood gate opens. This happens roughly once every week and sadly, it’s the period when the sloth is most vulnerable to attacks and likely to perish in the wild.

Gently and unhurriedly, the sloth embarks on a suicidal mission from the safety of the canopies down to the forest floors to defecate at the base of its favorite tree.

Two toed sloth sometimes release their scats right from the trees. An efficient way to do it.

Upon reaching the base of its preferred tree, the sloth wraps its fore-arms tightly around the tree trunk while simultaneously clawing into the barks.

At this position, it begins a mysterious poo dance; wiggling its hip from side to side in an attempt to dig up a hole (with its stubby little tail) to contain its droppings. Two toed sloths generally do not have tails, so they lay their feaces directly on the forest litters.

After the holistic poo dance, the sloth begins to defecate; urinating and excreting a long fibrous ball that resembles the color of a rotten banana from its behind.

Their perpetual smile widens a bit more (a sign of relief) and their stomach can be observed to physically shrink in size. It is said that a sloth can loose up to one-third of its body weight after a healthy scat!

Soon after defecating, the sloth performs another truffle shuffle to cover up its business, then it begins the last phase of the journey back home by ascending towards the forest canopy.

If the sloth is lucky enough, it will observe its bathroom and ascend to the safety of the canopy without any depredation event. If its not however, then that’ll most likely be the last time it’ll ever get to visit the bottom of the amazon rainforest.