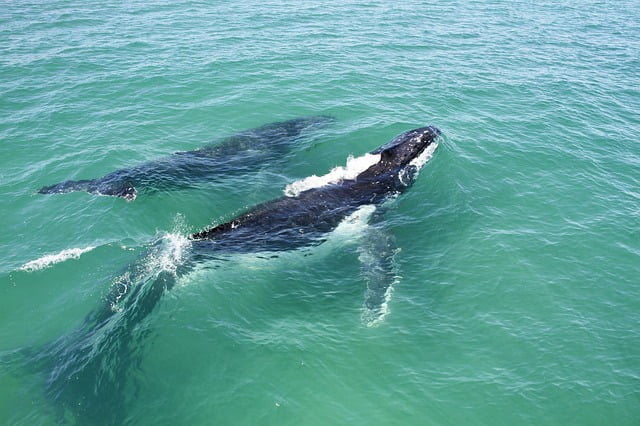 In this article, you’ll learn whether or not whales have to lay eggs in order to give birth to their young ones. You’ll also learn extensively about the reproductive process of whales which includes: courting, mating, gestation and birth of offspring.

Whales do not lay eggs the way sharks and other fishes do at the bottom of the ocean. They are mammals that instead, become pregnant and give birth to an anatomically complete but altricial young just like humans. Whales, for part of this reason, are grouped under the most diverse clade of mammals known as the placentals.

These are simply mammals that nourish their embryos with the aid of a complex but efficient organ called placenta during gestation. The organ supplies nutrients to the embryo and also performs immune functions.

Surprised whales are closely related to humans than fishes? Read here to learn why whales are classified as mammals.

We’ve learnt from the question and answer section above that whales do not lay eggs but rather give birth to their young ones alive.

The next few sections give a detailed insight into the concept of reproduction in whales: starting from maturity and mating of individuals to the mentally taxing endeavor of nurturing and protection of pups after birth by their mothers.

Sexual maturity in whales occur between the relatively short timespan of 6 to 13 years and varies substantially across species and genders of each species.

The baby stages of whales only last for about 1 to 3 years after birth and adolescence stage (the intermediary between adulthood and baby stage) runs anywhere from when a baby is weaned by its mother, to the period when it attains sexual maturity.

Whales that attain sexually maturity begin to search for potential mates for a chance at reproduction. Females often mate with more than one male partners during the breeding season to double their chances of getting pregnant, as they only choose to get pregnant after every 3 to 5 years due to how physically and mentally taxing the process is.

So during the breeding season, female cows ensure that the energy and time they expended to arrive at their breeding grounds are not put to waste by trying as much as possible to mate with as many males as they can.

Whales often mate and reproduce during the winter months, and both sexes often migrate (at different intervals) to low productive waters to do so.

The journey is a long and arduous one characterized by very short-breaks and lots of fasting.

On reaching their breeding grounds, males or (bulls) begin their courtship rituals which is simply summarized as an effort to win over females.

Courtship competition in some whales (like the humpback) may be aggressive and fierce often characterized by head lunge and forceful contacts. Others compete with one another in a more mature and peaceful way.

It is speculated by scientist that some whale species opt to sing attractive “whale songs” instead of engaging in fierce and aggressive battles with one another.

The songs which are lengthy, and made up of units compiled into phrases, then ordered into themes and repeated to form complex songs, are meant to signal the nature of fitness and readiness of males to mate with females.

The whale species that sing songs on breeding grounds include: Blue, fin, mink, bowhead and of course the humpback whale which is the most notable of them all.

Females can get choosy in the wake of this competition but when they are finally dragged into the mood, they pick up several partners to copulate with.

During mating, females have their bellies facing upwards while the males position themselves at a slightly tilted angle against them, in such a way the two genitals come together.

The males continuously stroke or maneuver the females and then ejaculate sperm from their penis into the vagina or vents of the females, sometimes even while swimming.

The sperm is what fertilizes the egg released by the female and render her pregnant. Depending on circumstance and many other factors such as fertility of the male, this activity may or may not be successful. (Again, another reason why females choose to mate with more than one interested males).

Pregnancy and care for offspring.

Once a successful fertilization and implantation occurs, females gestate for a period between 11 to 16 months depending on species.

Calves are nourished in their mothers womb through an organ called the placenta (similar to the ones found in humans) and they can grow in sizes to about one-third the length of their mothers when they are born. Different calves are usually born at different lengths and different body weight relative to their mothers.

When they are close to completing gestation or delivery (between the winter and spring season), pregnant cows migrate to their breeding sites to give birth.

The conditions there are much warm and favorable, increasing the chances of survival of the young. During birth, cows deliver their babies in a tail-first fashion in order to prevent them from drowning. They then take them immediately to the surface of the ocean in order to catch their first breath.

As young calves are super vulnerable to predation (from sharks) especially during their first year (due to their relatively smaller sizes), mother cows are extremely wary and over protective of their babies.

They guard and teach their calves basic survival and feeding skills while nourishing them with thick milk comprising about 50 percent fat content.

They suckle them for an extended period between six to seven months and wean them after that.

By the time the baby sharks are weaned, they must have grown impressively huge in size (as a result of the rich fat content of their maternal milk) and have acquired basic lifestyle skills to be able to live on their own and fend for themselves.