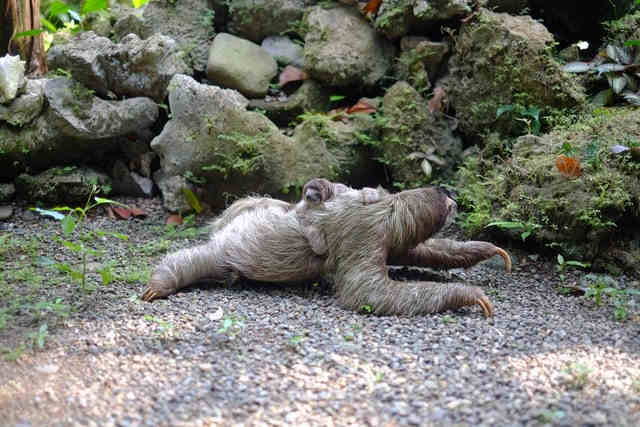 Sloths spend most part of their lives hanging upside down from tree branches or nestled comfortably between the bifurcation of tree trunks. On very rare occasions, they can be observed climbing down to the bottom of the rainforest in order to fulfill one or two basic needs.

While on the grounds, there are quite a few number of conspicuous things can be easily noted about them. In this article, we highlight some of the most interesting facts about sloths, not in the trees, not in the main, but when they descend all the way to the bottom of the rainforest, enjoy.

5 facts about sloths on the ground

1) Three toed sloths prefer to poop on the forest floors

Adding to the mystery collection three toed sloths, the most fragile members of the sloth family, these three fingered canopy dwellers only prefer to descend from the safety of the canopies to the bottom of the rainforest to defecate.

Most other arboreal dwellers; the likes of monkeys, koalas, tree kangaroos and even their two fingered counterparts prefer to release their fibrous scats right from the safety of the canopies. It’s much more safer and convenient for them.

Two fingered sloths are actually more ruggeder than their three fingered counterparts, their diets are more varied, over and above the regular foliage and leaves and incorporating other plant materials like fruits and flowers.

They are also less susceptible to foreign microbes that can be transferred into the body through contact with foreigners. As further addition to their rugged nature, two fingered sloths are actually also the more agile, faster and stronger of the two, and these handful of important characteristics all together form the main reasons why two toed sloths can easily survive captivity while the three toed sloths can’t.

Now back to the main gist. In addition to the fact that three toed sloths prefer to climb down from the safety of the canopies to the bottom of the rainforest to defecate, they are also observed to be strictly selective of the areas where they choose to do so.

They seem to only defecate at the base of their favorite tree, which can be as proximate as the base of the modal tree they descended from or the roots of another tree located somewhere within the forest area.

Sloths embrak on this arduous journey once every week, and many theories have been postulated to explain why this weird bathroom habit happens.

The fact that sloths faced heightened risk of depredation with little chances of survival is actually what motivated scientist to dive deeper into this issue. The assumption is that a cogent reason has to be there, as to why three toed sloths would be willing to risk their lives for a journey that could be easily alternated.

We outline two of the most notable theories below. To learn more about these postulates in details, click on the respective links at the beginning of each paragraph.

2) Sloths also descend to the forest grounds to change habitat

We’ve learnt from the previous section that sloths, specifically the three toed variety, descend from the safety of the canopies to the forest grounds to relive themselves, but thats far from the only reason why sloths (in general) are found combing through the dense understorey of the tropical rainforests or crossing over from one side of a major road to the other.

In order to switch from a spartan to a much more comfortable habitat, sloths either wait for the occasional rainforest floods to appear and canoe them to their new habitat or suffocatingly journey down to the bottom of the rainforest and begin search for a new habitat amidst intense risk of depredation. (A journey they are very unlikely to survive)

3) Sloths cannot walk on the ground

While on the ground, sloths do not walk but rather crawl, and they do so by dragging their bellies against the ground surface. They’ve completely lost the ability to support themselves on the ground ever since they traded their terrestrial habitats for an arboreal one.

Ancient sloths are known through research for their terrestrial land locomotion. (The persistence of avocado trees till date is a major and sufficient proof for that).

The modern day sloths evolved to live in trees as opposed to on land, from these ancient ancestors. And as a result, their overall muscles tissues, over time, have become arranged in such an energetically friendly fashion that strictly befits their arboreal lifestyle. (This means that they’ve sacrificed and rearranged a lot of muscle tissues to the point that they are now rendered useless on the ground).

Sloths drag their bellies on the forest floors while on the ground. They use their long somewhat curvy claws to find a hold, and then drag themselves forward using the strong retractor muscles in their forelimbs.

4) Sloths are extremely slow on ground; so slow and defenseless that they can be harassed by a fist sized lizard.

Because of their weird mode of locomotion in ground and also given the fact that they are naturally born slow and deliberate, sloths are extra extra slow in the ground than they are in the trees. In fact, a sloth is so slow and defenseless on the ground that they can be bullied and harassed by lizards no more than the length of a human fist.

We all know that Usain Bolt ran 100 m in 9.58 seconds during the world championship in Berlin, Germany, 2009. (the world record still stands as of the date of this publication).

If a three toed sloth was among the candidate sprinters on that day, then it would take the animal nothing less than 25 difficult minutes after Bolt had crossed the finish line to cover half the sprint distance.

It will the take the sloths at least 50 minutes to cover the complete distance of 100 meters while running at its average ground speed of 1.5 to 2.5 meters per minute.

A sloth actively roaming the eclipsed floors of the rainforest presents itself to heavy risks of depredation event. In a field study conduced by Pauli and Peery in 2013, they observed that more than one half of all adult sloth mortalities they recorded in their study happed as a result of depredation events when sloths were at or near the forest floors.

This is understandable given the fact that sloths are extremely slow on the ground which makes it very difficult for them to maneuver their bodies and defend themselves against irate predators.

This slowness also reduce the effectiveness of their clawing and biting techniques, and compounding to the problem is the fast and agile nature of their main predators which include felids, snakes and many birds of prey. The sloths has no chance but to pitifully surrender and accept this ill fate.

Another reason why sloths are more likely to perish on ground as opposed to being in the tress is the fact that migrating sloths find themselves crossing over majors very often. And given their slow and deliberately paced nature, they are bound to be consistent victims of hit and run incidents which is almost always going to be fatal especially on a highway with few speed breakers.

If you ever find any sloth trying to cross over a major road, there are a few things you can do to help. First, and this one is for those who are scared to death to approach a sloth, is to create a road block impression to give safe passage for the animal. Second is to aid the animal yourself by picking the it up from its back while making sure to keep a safe and reasonable distance away from the it.

Bunu. M. (2020, June 11). Facts about sloths on the ground. Retrieved from http://emborawild.com/facts-about-sloths-ground/

1 thought on “Facts about sloths on the ground”