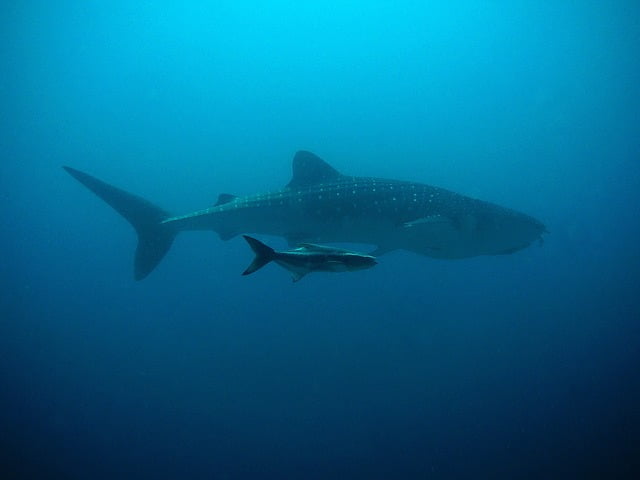 Whale sharks are some of the most decorated aquatic species in terms of both somatic appearance and scientific records.

In this article, we highlight some of the most prominent records of the whale shark and also list out a number of the most interesting and intriguing facts about them from feeding, reproduction, behavior all the way to morphology and lifespan. Enjoy!

b) Whale sharks have the prefix “whale” added to their name because of their similarities in external size morphology and feeding to baleen whales. Whale sharks can rival the sizes of many whale species and their mode of filter feeding is similar to that found in baleen species of whales.

b) When it comes to their size, whale sharks can grow a maximum of 20 meters from head to tail and weigh a staggering 32,000 kg. Thats roughly 12 times the length of an average human and nearly 450 times his average weight.

c) The average whale shark stretches somewhere between 9 to 12 meters in body length and weighs roughly under 11,000 kg. Despite this enormity in length and mass, for both the lower and higher end of the range, whale sharks are relatively smaller compared to most species of blue whales. The largest blue whale can grow to a maximum body length of 31 meters and weigh a staggering 157,850 kg.

d) Whale sharks are also the largest living non-mammalian vertebrate in existence today. Vertebrates are simply animals possessing a vertebral column. Of all five out of the six major classes of animals: Invertebrates, fishes, amphibians, reptiles and birds, excluding all mammals which make up the sixth class, whale sharks hold the record for the largest species currently in existence today.

a) Whale sharks may be the largest living species of sharks in the world and may even look scary and intimidating to some people, but these creatures are actually one of natures most docile and benign. Swimming with them is fun, exciting and most of all, absolutely and completely safe. These creatures have zero to naught appetite for anything larger than a few millimeters in length, and have never ever, on any records written or videotaped, been observed to intentionally prey on or even initiate an attack against nearby divers.

b) Whale sharks are avid migrators and can travel several thousand miles over the course of a few years. Whale sharks migrate primarily to find food in rich and productive waters.

a) Whale sharks have the most teeth among all living animals. They have up to 27,000 teeth arranged in more than 300 tooth rows.

b) Despite having a supernumerary tooth count, whale sharks do not appear to use their teeth for any useful purpose. Some Ichthyologists consider their teeth to be vestigial structures: remnants of what used to be the feeding teeth of their ancestors.

b) Every whale shark has a unique pattern of spots and stripes on its body that can be used to identify it.

c) Whale sharks have skeletons that are made up of cartilage, the structure present in our ears and nose, rather than bones, as seen in most mammals and other fishes that aren’t sharks. Cartilaginous skeleton is actually a distinguishing feature of all sharks from the other three broad divisions of fishes: bony and jawless fish.

d) Female whale sharks are larger than their male counterparts. Females can be distinguished from males by the absence of clasper, an organ present in the males that is used for securing females during mating.

a) Whale sharks feed on planktons: some of the tiniest organism found in the ocean. The reason for their forage choice has a lot to do with energy maximization; Read under the sub heading “The whale shark diet” to learn more about this:  What do whale sharks eat?

b) Whale sharks, in contrast to most fishes and sharks, and in resemblance to the baleen family of whales, feed by swallowing plankton rich water into their mouth and filtering the food using a filtering pad located at the far end of the throat. This is called filter-feeding.

c) While feeding, whale sharks can swallow upto 600 cubic meters of water per hour. Thats about 600,000 liters of water in sixty-minutes!

e) Whale sharks forage for an average of 8 hours per day.

a) Whale sharks are ovoviviparous meaning that they ley eggs within their bodies, allowing them to hatch there and then give birth to a fully developed young.

b) Whale sharks can lay up to 300 eggs per breeding cycle.

c) Whale sharks are unsolicitous towards their young. Once they hatch and are given birth to, they are abandoned by their mothers and pitifully left to protect themselves and forage on their own. To increase the chances of young survival, whale sharks lay plentiful eggs within their bodies, and give birth to as many as 300 pups per breeding cycle.

a) Whale sharks have an average live expectancy of 70 to 130 years. They mostly grow and weigh the maximum at that age.