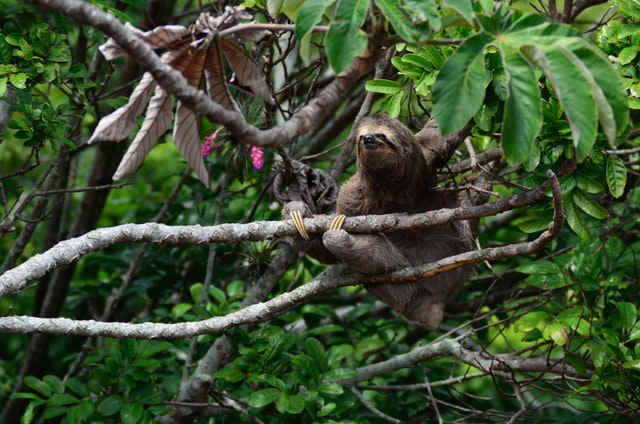 Sloths are small but mighty, and their lifespan in captivity just proves that!

Read on to discover exactly how long sloths live in the wild and also in captivity. If you’re interested to know why sloths enjoy such kind of lifespan in both situations, you’ll definitely not be disappointed with this article.

In the end, i’ve also outlined for you the different ways in which sloths meet with their demise in the wild.

How long do sloths live?

No studies (up until this very moment, dated the period when this article was first published) have been conducted to observe the full life span of sloths in their natural environment.

As such, their average life span in the wild is currently unknown. In captivity however, sloths of the two toed variety are known to surpass the 30 year mark, with the oldest individual — a female of the linnaeus’s specie named paula, currently 50 years old.

Going against the norm; shorter in captivity, longer in the wild

The Xenarthra group of sloths is one of the least studied animal groups by researchers and scientists.

Arboreal sloths in particular, are very difficult to study in their natural habitat due to their cryptic coloration and the impediments of their environment. (having to deal with consistent floods and notorious mosquitoes rivaling the sizes of a Northern chestnut, to mention but a few).

No individual (till this very date) has successfully followed a sloth in the wild from birth until death, and as a result, their lifespan in the wild is currently unknown.

Any estimate or range of their longevity in the wild given by blogs or other literatures are likely to be without substantial proof and any factual evidence.

Normally, given the difficult and unfavorable situation encountered when trying to conduct a full lifecycle study of sloths in their natural environments, the next predictable tactics by scientist would be to try and determine the age of wild sloths using their teeth or claws.

But even this method is faced with a serious constraint too. All family of sloths have an actively monophydont dentition and both their teeth and claws are continuously growing throughout their life, making it notoriously difficult to determine their age from this technique [1].

Note: Monophydont dentition simply means that sloths do not transition from milk to permanent teeth at any stage in their life, unlike humans who posses milk teeth at birth and begin transition to permanentteeth at early childhood.

In captivity however, sloths, specifically the two fingered variety, are known to live an average lifespan of 30 to 40 years. The oldest living individual in the world is a two fingered female of the linnaeus’s specie named Paula, who is currently 50 years old [2].

She currently resides in Germany, at the Halle Zoo in Saxony-Anhalt. The closest captive sloth to nearly achieve this feat was an elderly two toed sloth who lived at the Smithsonian’s National Zoo in Washington DC, she died at the age of 49 [3].

It is suspected that captive two fingered sloths may perhaps live longer than this age given the fact that they were not taken into captivity until around 50 years ago — limiting the possibilities of any individual to actually exceed this figure.

Wild sloths are also expected to have a longer lifespan compared to those surviving in captivity. According to Gilmore and Duarte, (2000), sloths, whether wild or captive, when exposed to direct physical contacts with humans experience an elevated level of heart rate and blood pressure.

Another study conducted on 17 wild brown throated three fingered sloths also showed that sloths constantly exposed to direct physical contacts with humans exhibit behaviors that indicate stress, fear and anxiety [4]. They sleep less compared to their times in the wild and become extremely vigilant of their environment at all times.

This unnecessary vigilance and cut back on sleeping times indirectly means that captive sloths are constantly under stress even though they rarely have the means to physically express their emotions on the outside [5].

(cheat sheet to the link, sloths have a nearly static physiognomy as an effect of reduced facial muscles, thus, they are unable to move certain areas on their face especially those above the upper lip area)

Another detrimental factor that could affect the lifespan of sloths in captivity is the kind of unnatural diet they are subjected to over there and the excessively sedentary and isolated lifestyle imposed on them.

Wild sloths have the freedom to feed on a wide variety of leaves and shoots unlike their captive bred counterparts which are mainly fed fruits and vegetables marked with super high fructose content.

We’re not saying that captive bred sloths do not get their natural and more prefered diets of new-growth tropical leaves and shoots in all zoos around the world.

What we’re saying is that most zoos won’t be willingly to invest significant time and financial resource to source out these food items for sloths, so the animals are left with no choice but the high fructose diets they’re constantly offered, which are not best suited for their slow-going digestive systems.

Their movements are also highly restricted and well confined within the perimeters of the surroundings where they are restrained, in comparison, wild sloths have the freedom to move anywhere, whenever and however they want.

The only arguable and true benefit sloths may derive from being held in captivity is the shelter they get from predators, and this seems to be countered with the indulgence of many south american zoos in unethical wildlife tourism.

All these factors when pulled and compiled together may indirectly translate a shorter lifespan for captive bred sloths. Besides, it’s a generally known fact that most zoos and rescue centers struggle to contain and sustain three fingered sloths within the perimeters of their walls because virtually all of them end up dying of starvation or sickness.

In case you are wondering why three fingered sloths are hardly found in any zoos around the world, it’s because of they are known to be highly selective of their diet and would only feed from the specific tree species they learnt from their mothers.

Their immune systems are also weaker than those of the two fingered sloths and so can easily get compromised from direct physical contact with humans.

As for the two fingered variety, they are able to survive captivity because of their more resilient nature and flexibility in diet, eating all sort of food items from assorted fruits, leaves to vegetables and herbs.

So, if the theory that captive bred sloths live shorter lifespans compared to those in the wild, it means that the prospect of a wild sloth currently older than Paula is a totally realistic proposition!

How sloths die in the wild

Other than the six ways mentioned above, adult sloths are known to be well camouflaged within their environments and can live for as many many years while hardly ever going noticed by passers by and predators.