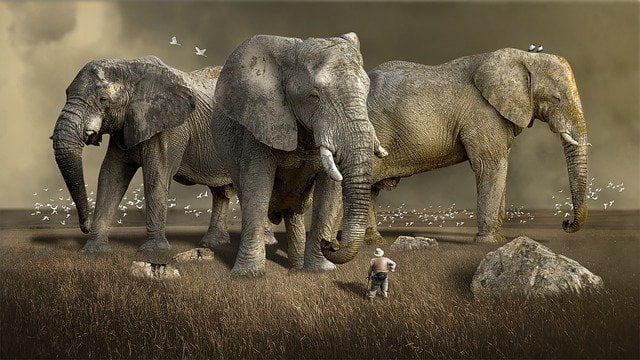 Elephants weigh nearly as much as the tongue of an Antarctic blue whale. And we wish we were kidding. We seriously do!

If you came here hoping to tingle your brain with the expanse of the pachyderm species, then we are sorry to startle you with the shocking greatness of the mystic blue whale.

Anyways, this article is all about the external size morphology of the largest, biggest, and heaviest terrestrial dwellers of the world — the elephants.

We’ll be discussing the body weights of the different species of elephant; from the males, females to their newly born calves.

We’ll also be discussing the weight of some of the external features of elephants such as the tusk and trunk, and also the weight of internal organs like the brain and heart.

How much do elephants weigh in kg, pounds and tons?

Before we move into the discussion, you first need to understand something about these terrestrial giants.

All living elephants today can be classified into three different species:

The important thing to note is that all three species have distinct ways in which they differ from one another: be it the concave backs of the African elephants that greatly contrast with the convex or level backs of the Asiatic counterparts, or the shorter and more rounded ears of the forest elephants that strikes a backwards resemble with the overhanging flaps of the bush elephants.

Now that you are familiar with the different groups that modern elephants are spread into, let us briefly discuss the weight span of each and every category.

How much do African forest elephants weigh?

African forest elephants are the smallest of the three pack. Regardless, they are still up there among the largest terrestrial animals in the world alongside their African brothers, their Asian cousins and the white and black rhinoceros.

In the wild, they are distributed throughout central and western Africa and the habitats they prefer within this range are lowland tropical rainforests, semi-evergreen and semi-deciduous tropical rainforest, and swampy land masses.

How much do Asian elephants weigh?

Their range spans throughout the Indian subcontinent and southeast Asia. Their habitats within this rage include: grasslands, tropical evergreen forests, moist deciduous forests and scrub forests.

How much do African bush elephants weigh?

African bush elephants are the largest species of elephants on earth. They have the larger ears, thicker tusks and more powerful trunks for moving objects.

Their range occurs in Sub-Saharan Africa including Uganda, Kenya, Tanzania, Botswana, Zimbabwe, Namibia, Zambia and Angola. The habitat within this range includes a variety of landmass such as the savanna, rainforests, woodland, scrub forest, deserts and beaches. Yea, the beach shores are tough enough to support the heaviest land mammal on earth.

How much do baby elephants weigh in kg, pounds and tons?

Baby elephants or rather calves are born big but super vulnerable to felid predation. Lions and cheetahs if you didn’t get that.

The weight of a newborn African forest elephant

The weigh of a newborn African bush elephant calf.

The weigh of a newborn Asiatic elephant calf.

The brain of an adult elephant weighs between 4.5 to 5.5 kg. This rivals, impressively, the documented range mass of an adult three toed sloth — the smallest of the two families of modern day sloths.

While the brain of an adult elephant is morphologically larger than those of other animals, it is proportionately smaller and we humans still hold the crown for the largest brain relative to body size in the animal kingdom. No wonder we’re far more superior, intellectually.

But elephants just like we humans, also have a great degree of mental flexibility, are super intelligent as some individuals have proved so through painting abstracts and landscapes, and also exhibit complex social behaviors.

For baby elephants, their brains develop to around 30 to 40 percent of it’s adult weight at birth. With time, and as the baby grows and matures, the brain expands in order to attain its full size.

Elephant trunk weight: How much do elephants trunks weigh?

The trunk of an elephant can weigh as much as 140 kg, or in other interesting words, far more than their neonates weigh at birth.

This trunk can be used as deadly weapons for protecting young, for comforting a distress young, for moving objects, uprooting trees, and for feeding.

In situations where an elephant looses its trunk as a result of natural disaster, the elephant usually feeds by dropping to the ground (by bending its knees) and cutting grasses with its lips.

The heart of an elephant is big, bigger than 4 human babies stack up on  scale. The heart weighs between 12 to 27 kg which is equivalent to around 20 to 40 lb.

Generally, the heart of an elephant weighs around 0.5 percent of its total body weight which is quite small relative to its enormous sizes. Maybe that’s why elephants are so gentle and caring who knows? Still, don’t dare test the patience of a mother elephant by messing with her baby!

How much does the skin of an elephant weigh?

The wrinkled, soft to the touch skin of an adult elephant can weigh as much as 900 kg or over 2000 pounds. The skin can be as thick as an inch in some areas such as the back and thigh, while being as thin as 1/10 th of an inch on other areas such as the ears and mouth region.

How much do elephant teeth weigh?

Putting aside the tusks which we are going to discuss separately (below), elephants have four flat and wide molar teeth which they change about six times during their lifetime. In a fully mature adult, each molar can weigh as much as 3.6 kg and span up to 10 to 12 inches across.

The tusks of an elephant is basically a derivation from its front incisor. The tusks can weigh as much as 100 kg and they can be used as weapons for defense and for digging into soils.

How much does elephant ears weigh?

Elephant ears are enormous, particularly those of the African bush species. Their ears can weigh over 100 pound and stretch about six feet from top to bottom and five feet across.

How much does elephant poop weigh?

I have to admit. Regurgitating the fact that elephants excrete nearly as much as 150 kg of poop while chewing on a flap of wet chicken skin is no fun. They do this every single day!

This concrete stinky production is due to their heavy rate of grazing. They mainly consume grasses, fruits, seeds, herbs and leaves and their daily intake is about 4 to 7 percent of their entire body weight.

The huge mass of body discharge is slapped onto the savanna and tropical vegetation as the elephants walk by with majesty and pride. Who dares question the bathroom habit of the true king of the jungle.

Elephants pooping in such manner isn’t necessarily a bad thing, we’ve come to know that the seeds present in these feaces end up going into the soil and germinating, eventually becoming food for both them and other smaller animals.

How much weight can elephants lift?

Elephants lift with their trunks, and the trunks are extremely powerful. It is capable of lifting raw mass averaging 350 kg (or 770 lb) in weight. Elephants can use their trunk appendage to uproot loose trees and turn over cars. They can easily toss motorcycles around when infuriated.

Elephant vs whale: who weighs more?

Blue whales are not only the largest species of animals in the world, they are also regarded as the the largest animal species to have ever step foot on earth. Their sizes compared to elephants is extremely mind blowing.

To put that into a humbling perspective, it would take 19 to 22 adult elephants to completely fill the shoes of an adult blue whale.

The biggest elephant ever recorded in history was a male bull shot dead in Angola in 1956. He weighed a staggering 11,000 kg and had a shoulder height of 3.96 meters or 13 ft. In comparison, the adult bull elephant weighed an extra 4000 kg more than the tallest bush elephant currently identified today and one meters taller than the average African elephant.

In comparison to a blue whale, its weight is still insignificant, lying between 1/4 th to 1/5th of the total body mass of the aquatic giant.

Bunu. M. (2020, July 16). Elephant Weight: How much do elephants weigh? (with pictures). Retrieved from http://emborawild.com/how-much-do-elephants-weigh/