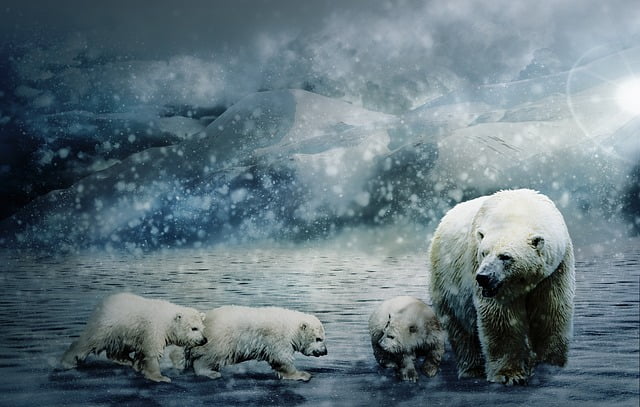 In this article, we discuss everything there is to know about the polar bear baby from courting and mating in adults to birth and maturity of the young ones (and everything in between).

Like any other animal, polar bears must breed in order to produce offspring, and similar to other ursids— all living members of the bear family including brown and black bears, their breeding season is prolonged and lasts anywhere from March to June.

During the breeding season, females enter into a prolonged estrus cycle (mating mood) with the peak of this estrus occurring between late April to early May. This peak can be easily detected in females by the turgidity of their vulva and eager discharge from their vagina.

Before any male and female can come together to conjure up a new generation, courting has to take place and sometimes, show of dominance.

Receptive females often mate with more than one interested male in order to maximaxe their chances of a successful fertilization. This is crucial given their depronouced cycle of productivity (2 years) and limited number of cubs born per litter.

Males often locate mates by smelling their daybeds and sniffing urine to analyze how receptive she is. They compete with one another in order to establish dominance and the contest can grow extremely intense in cases where neither side had established dominance before. Male competitors can end up with broken jaws or even a broken teeth after a fight.

The strongest and biggest males usually end up being the most prolific breeders. Younger or weaker males hardly every get a chance to breed with any female during the mating season.

When the greatest of males have risen above all odds, they engage in simple courting behaviors for several weeks on end in order to establish a connection between them and their potential mates.

Females at times can play hard to get and may engage in playful fights with the males where they swat on their faces with their forepaws but the determined and eager males hardly retaliate.

Female polar bears allow males to mount on them when they are the most receptive or heated— a period which corresponds to the peak of their estrus cycles. Release of eggs from the ovaries is usually triggered by coitus (sexual intercourse).

Coming together (if you know, you know)

When mating, the two love birds become inseparable. They mate continuously for the next two or three days and repeatedly in a single photoperiod (day). After the expiration period, the females may be approached and mated by other males.

Release of eggs in polar bears is trigged by sexual intercourse, but the actual implantation of this egg after fertilization happens in autumn, around September to October period when mother bears have successfully transitioned into their dens to sleep over winter. The delay is necessary to allow females to be able to access whether they will be able to secure sufficient resources to bring their pregnancy to fruition.

Polar bears usually have an ultimate feasting period around early spring to mid summer where their primary prey of seals occur in abundance. It is during this period, which coincides with their breeding season, that females gather the most fat reserves that is used to support the energetic cost of pregnancy, birth and nurturing of cubs during their winter hibernation.

If females after mating, are unable to gather sufficient energy reserves up until autumn arrives, they will forgo reproduction completely rather than choose to bear the increase in risks by incurring the energetic costs of the reproductive process.

Females simply reabsorb their fetuses and abandon their dens or refuse to den when they need to forgo implantation. They remain active like other bears to hunt for seals and prepare their bodies for the next breeding cycle.

Gestation in polar bears is brief and runs for about four months from the start of implantation in September to October. The gestation period is estimated to be around 195 to 256 days.

The fat accumulated by polar bears is used to provide warmth and sustenance for the developing embryo inside the mothers womb.

All these happen while the bear is deeply asleep in her denning chambers. She neither eats, drink, urinate or defecate, but she may occasionally arouse to move and stretch around.

Mother bears give birth to altricial cubs between early January to mid February. Litter mostly consist of twins but a single cub or three cubs are occasionally observed.

Neonates are born blind with short thin hair covering their mildly pink skin which will darken as they grown. They weigh only about 0.6 kg at birth with males often heavier than females.

Baby polar bears are also born with no subcutaneous fat under their skins to offer insulation against cold. They strictly rely on the warmth produced by their maternal den and also their mother’s underside to stay warm and cosy during their stay in the den.

Baby polar bears stick right next to their (often sleeping) mothers after birth and derive sustenance mainly from her milk. The milk is extremely rich in fat content, about 31 to 38% of the milk is made up of fat content.

This milk which has a higher fat content that that of other bears and more protein and fat contents than those of most other carnivores, allows for the tiny little cub to grow and develop rapidly before their emergence out of their dens.

Baby cubs born weighing only 0.6 kg can grow to as much as 10 to 12 kg in the space of 2 to 3 months. Their pelages also form completely and thickly and a thin layer of fat also develops under their skins as a result of this milk by the time they emerge out of their maternal dens.

Mother bears and their little additions emerge out of their dens when ambient conditions are now tolerable for the cubs.

This corresponds to the period of early spring or mid march — when conditions are much warmer, and also to the seal pupping season or their ultimate feasting period.

She may also have effectively fasted for the duration of that period and so must have lost a huge amount of weight; about 40 percent of her total body mass goes towards sustaining her denning conditions and nurturing her cubs according to research.

Mother bears usually den inland, but all polar bears spend most of their times on sea ice where there are abundant seals to catch and eat. These dens can be as far as 100 km from sea ice and mother bears have to travel all the way with her cubs in order to enjoy the reproductive waters of spring.

Mother bears often remain within the vicinity of their dens for up to a week before migrating onshore, so baby bears must have developed enough physical strength through playing and walking to endure the gruesome journey back home where there is plenty of food to eat.

While on sea ice, baby bears begin to learn all the survival and hunting skill they need to live independently on their own from their mother. They keenly observe how she stalk and captures their breakfast, lunch and dinner and learn from her defensive style.

During the first few months after emerging out from the dens, mother bears avoid swimming routes at all cost for her cubs.

At this stage, their blubbers are fairly thickened to provided buoyancy in water and also offer any meaningful insulation. So allowing them to swim can cause them to freeze to death.

During their first year with mum, baby polar bears feed almost exclusively on her milk and can grow rapidly by as much as an order of magnitude between den exit and their first birthday.

They learn what to eat by observing what their moms kill and also feasting together with her. Most baby polar bears often stop suckling by their first birthdays, but some can suckle until after their second birthdays.

As they age, especially during their second year, the milk from their mothers teats influences their growth and development less avidly like it did in their neonates stages. Milk with more than 30 percent of fat content before their first year, drops to about 18 percent or so after the first year.

Gradually, baby bears switch from suckling milk to feeding exclusively on seals after their first year or two. During this period also, they closely follow their caring, defensive and protective mothers to learn a lot of crucial survival skills.

By the second year, all baby polar bears must have stopped suckilng completely.

They now depend exclusivelsy on kills made by their mothers, as they still have very poor hunting skills to prey on slippery, bigger and more intelligent seals.

Baby bears on their second years can gain as much as double their first year weight.

After their second birthdays, baby polar bears are chased away by their mother into independence. Sub-adults shocked in dismay, will cry and call for their now uncaring mother but usually to no avail.

Weaned siblings will cuddle up together, walk together and try to forage together.

They may also get opportunities to forage on whale carcasses or that from abandoned kills from much stronger adults.

With time, bears begin to master and sharpen their hunting skills and have a much more higher success rate than they had during their first year after weaning.

All polar bears hardly ever cross the 25 year mark. Read more about the lifespan of polar bears in our detailed article below.

Bunu. M. (2020, July 9). Polar Bear Baby: Everything you should know. Retrieved from http://emborawild.com/polar-bear-cub/