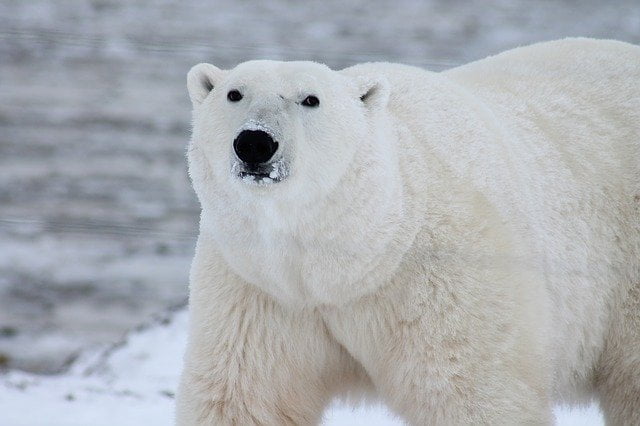 The lifespan of polar bears in the wild is neither as impressive as their glamorous looking pelages nor the striking resemblance they bear with a huge number of toweringly cast figurines.

Researchers theorize (or expect without actually confirming anything) that a vast majority of polar bears in the wild will hardly ever cross the 25 years mark during their lifetime.

This is perhaps as a result of their faster and more impactful version of old age which greatly influence their ability to forage for food, and thus their survival. We’ll discuss this speculation in a more in-depth manner in the section below.

The fact that most wild polar bears won’t ever cross the 25 year mark before they die doesn’t mean that there aren’t any individuals that have done so.

As a matter of fact, the oldest wild polar bear on record died at the age of 32, while that in a captive situation died in 1991 at the age of 43.

If the records scream anything, it’s that captive polar bears enjoy a much longer lifespan compared to their free living counterparts the in wild, perhaps due to their more consistent supply of food and artificial exposure to less frigid and intense climatic conditions.

Why do polar bears only have a 25 years life expectancy?

The answer to this puzzling question still remains a mystery, but one interesting speculation that some scientist have sprung up suggests that this shorter lifespan might be as a result of starvation caused by loss of competitive edge and foraging skills associated with periods near or at this age.

According to this speculation and also according to the undeniable law of nature, polar bears in the wild attain temporary moments in their life cycle when their killing efficiency becomes greatly sharpened and survival rates surges upward like an impatient smoke.

This corresponds to their peak periods of early adulthood to mid adulthood when all survival and hunting skills appear to have been fully attained.

After this period of dominance and climax however, polar bears begin to naturally deteriorate in strength, willpower, determination and killing efficiency.

As a result of this natural repression, they begin loosing their competitive edge to newer and fresher adults that are now attaining their own climax. They are now experiencing more pronounced periods of starvation like in their independent stages of sub-adulthood.

Foraging is now difficult for the old

When polar bears live past their climax age, foraging for slippery, intelligent and aggressive seals become a risky and difficult endeavor. Risky because any injuries attained from foraging activities may prove to be life threatening on the long run or even at that very instant, and difficult because they have begun loosing their strength which mostly guarantees competitive edge over other bears.

At their climax, polar bears are like undisputed overlords with a great degree of authority and power, but as they age with time, their dominions fade out and stronger and much younger adults pick up from where they left.

When older polar bears manages to pounce on and make a kill, they are unable to defend it against other hungry kleptoparasites, and when they decide to intimidate other bears in order to steal their kill, they end up pitifully intimated and chased off instead.

Adding to the problem

Compounding to the problem of loss of hunting prowess is the painful issue of food scarcity pronounced mostly during summer.

Polar bears have a feating season lasting from late fall to early summer, with the ultimate feasting period occurring throughout around spring, and a fasting season occurring from mid summer all the way to mid fall. (This periods can actually vary according to climatic conditions of a specific habitat)

The feasting season is characterized by abundance of prey which offer polar bears the opportunity to feed consistently and gain a lot of adispose tissues or body fat reserves.

The fasting season on the other hand is characterized by scarcity of primary food resource (seals) which forces polar bears to live primarily off their body fat reserves until they are lucky enough to find sustainable food or the productive atmosphere of winter arrives again.

Fasting during the season of fast doesn’t actually happen by means of internal compulsion and bears are only driven into this act when arctic sea ice: the platform used by polar bears to access their main prey of seals, naturally shrinks northward in response to the warming climate and their primary prey of seals also migrate away with it.

During the colder month however, the arctic sea ice increases southward and brings forth with it plenary of accessible seals for polar bears to pounce on.

During mid-spring, the concentration of seal prey becomes the highest as a result of it’s correspondence with their pupping season. This provides the ultimate feasting periods for polar bears as readily accessible baby seals which are practically negligent and defenseless towards predators are available in abundance.

The problem of summer food scarcity in polar bears is even made worse by local and widespread climatic phenomenons that make sea ice break up earlier than expected and form up much more later. An example of such phenomenon is global warming.

When all these factors combine and build up in a polar bear, the result becomes an inevitable death before the age of 25.

How do polar bears die in the wild