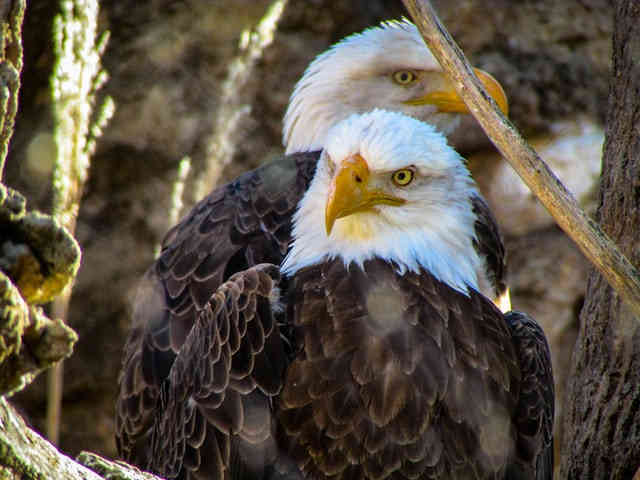 Eagles are powerful birds of prey found widespread across the different landmass of earth; from Eurasia and Africa, all the way to North America and South America. Forgot to mention the 3 species of Australia.

They are massive species of birds rivaling the sizes of condors and old world vultures and are famous for killing their preys without looking back over their shoulders contrary to what the vast majority of raptors do.

In this article, we’ll try to see things from opposite perspective. We’ll be discussing about the predators eagles (if any actually exist) and also talk briefly about their wild diets and before and after forage habits.

We’ll also be discussing about eagles as related to religion and folklore.

In the marshy and coastal areas of the jungle where they live (of course we know they also inhabit woodland areas and other types of wilderness), eagles inhabit the highest levels of the trophics feeding exclusively on bottom level animals without having to worry about any natural predators.

The consistent amount of time spent in the air, the elevated location of their nests and the extremely powerful visual acuity they posses (among many others) are perhaps the main reasons why they’ve not evolved any natural predators.

What do eagles eat?

The different species of eagles all have a varied meal preference, with some opting to feed exclusively on fishes and water birds, while others preferring to capture snakes and medium sized vertebrates — the vertebrates can sometimes be 7 to 8 times the body weight of the preying eagle.

Some species of eagles are even capable of pouncing on and lifting animals that are nearly the same size as they are. Harpy eagles are a perfect example, the females typically weigh between 7.34 kg to 8.3 kg and they are able to snatch up arboreal mammals like sloths and spider monkeys weighing between 6 kg to 9 kg.

Bald eagles are also fond of this habit, one individual on a verified record, was observed lifting a 6.8 kg mule deer to a site for devouring. The prey in calculation was slightly more than the total body weight of the eagle body at 6.1 kg.

The record animal was a female bald eagle, and some field biologist consider this event to be the record lift ever observed in any wild bird of prey. Some argue that female harpy eagles weighing roughly between 7.35 to 8.3 kg, (although not particularly on record), can lift prey animals much heavier and larger than that.

How do eagles hunt?

The common hunting technique for eagles is to sneak up on their preys (while perching on succesive trees) and snatch them up to their nests for killing.

This technique is mostly successful on smaller and much fragile animals — those incapable of maneuvering their way out using force, from the suffocatingly tight grip of an eagle’s talon.

For much larger prey animals, such as arboreal and ground dwelling mammals, eagles prefer to throw them off a cliff, (as in the case of animals found near and around hill and cliff areas i.e mountain goats), or from trees (as in the case of monkeys and sloths), or simply attack and injure them (possibly to instant death) with their huge deadly talons.

In large gathering of prey animals, eagles often attempt to isolate the weaker ones by causing distractions in a dense, knotty environment (i.e forests). Then, they attempt to pounce on the individual (which is often a juvenile or an injured animal), successful which they take back home for their waiting family.

Eagles feed on their preys without looking back over their shoulders. This perhaps is one way we can distinguish eagles from other members of the birds of prey group as the masteros and kings of the avian world.

They feast on the much tougher parts like heads, and lib areas and take back the much softer internals for the family.

Eagles have super strong vision (upto 3.6 times that of humans) for monitoring their preys, muscular legs for hitting and causing maneuvers, and huge deadly talons for capturing and lifting off the animals.

Any documented or observed depredation events on adult eagles are likely opportunistic and not active, when individuals sustain injuries and are recovering on the forest ground, or when caught unawares trying to retrieve fallen preys from the ground (some eagle species prefer to drop off their prey from long heights and then travel all the way down to retrieve the dead animal).

The animals that are most likely to opportunistically prey on eagles are big cats like lions, ocelots and jaguars.

While the terms apex, powerful and massive are most commonly used to describe mature and fully grown eagles, the opposite of nadir, weak and vulnerable are those tied with juveniles, (almost every juvenile).

Much like any other animal at the bottom of the food chain, baby eaglets are super vulnerable to attacks from hungry and irate predators.

The attacks may come from predators tracking them all the way to their nesting areas and biting off their necks for the kill, although this rarely happens since their eyries (or nests) are often situated at the very top of tropical trees (the tall ones) or high cliffs and hills, and baby eagles are almost always, guarded and protected by either or both their parent, Or, during their early or first ever flight practice, where they glide all the way down from the safety of their nests and landing roughly on the forest floors or on tree stumps with lurking predators waiting behind the tall forest brushes.

Some of the animals that have been documented eating juvenile eaglets include, racoons, ravens, black bears, wolverines, bob cats, hawks, craws, and owls.

Female eagles can lay upto two fertilized eggs after a successful reproductive effort with their partners, but they usually end up with a single chick because the older and larger chick (which tend to be the females), pounce on and kill the younger sibling once they hatch. The surprising thing is that the mothers make no attempt to stop the ‘gruesome’ killing.