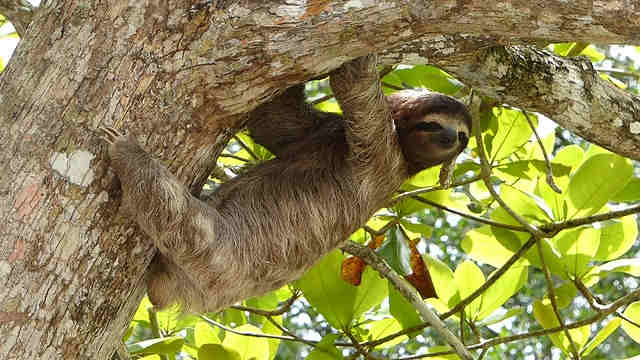 Modern day sloths occur in six distinct species spread unequally across two distantly related families. The two families and the number of species within each family include:

Both families of sloths subsist primarily on the same food material but a subtle difference exists when it comes to their overall diet composition.

In this article, we give an expansive overview of the diet composition of modern day sloths and also discuss briefly about their after-foraging habits from digestion to pooping.

Two toed sloths, more correctly referred to as two fingered sloths, have two sharp claws serving as the extremities of their respective forelimbs. They are the bigger, sturdier and more stronger of the two sloth families and are also the more agile and fast-paced.

The long guard hairs are grooved emminently in a transverse manner and have been observed to accommodate different species of green algae whereas their pelages accommodate myriad organism such as moths and fungi.

The green algae helps provide cryptic benefits to the sloth and perhaps serve as an alternate source of nutrient [1].

They also alternatively associated with the name, unaus.

What do two toed sloths eat?

Two toed sloths have a more varied diet composition than their three fingered counterparts. All species of sloths are primarily folivorous; selectively eating tropical leaves from more than 90 different tree species including those from the cecropia tree.

Two toed sloths in addition to the green diet of tropical leaves, also consume plant materials such as shoots, fruits and and edible flowers.

There are some literatures claiming that two toed sloths also eat small reptiles and insects such as lizards, grasshoppers, frogs and small snakes. This claim seems to be highly unlikely given the naturally lethargic nature of the sloth and their possession of an extremely slow digestive system most perfectly suited for a tough and poorly nutritious forage.

Speaking of nutrition, the sloth diet of tropical leaves is one that is seriously deficient in beneficial nutrients and significant calorific contents.

The leaves in addition, are toxic and very difficult to digest and assimilate into the body: part of the reason why sloths have one of the slowest metabolic and digestive rates.

Two toed sloths eat mostly by hanging horizontally upside down from tree branches. But they can also eat orienting in any direction they choose.

They locate leaves primarily through olfaction and physical perception as their vision and hearing are not very acute.

They pull leaves closer to their mouth with the aid of their foreclaws and tear fragments using their tough upper lips. They chew with their strong molariforms teeth located at the back of the mouth and swallow by moving their large tongues backwards.

Two toed sloths eat very little, about one third the diet size of a similarly sized howler monkey in a single day. According to the Sloth Conservation blog, an institute formed primarily for the protection and conservation of wild sloths, all species of sloth consume no more than 73.5 g dry weight of leaves per day which accounts to only a handful of leaves.

Two toed sloths prefer to chew leaves from younger branches because of their succulent and more chewy nature. They can misjudge steps and come crashing down into the dense understory of the tropics while foraging.

All sloths generally consume more during hotter days than in colder days as their metabolism and digestion rate become temporarily elevated. So things move a bit faster for them and they need to eat more to keep up with the pace.

All sloths derive most of their water requirements from the juice of the tough leaves they consume, so they rarely ever find need to quench thirst, although a research conducted by the sloth institute foundation caught one sloths of undisclosed identity hanging upside down from a tree branch in order to sip piled up water from underneath.

Worth mentioning: According to a hypothesis from a literature published in 2014, Sloths that grow algae on their pelages lick their body hairs consistently in order to trap these algae on their tongue for consumption. If this theory eventually turns out to be true, then green algae would also form a crucial part of the diets of modern sloths.

Three toed sloths are members of the modern day group of sloths with three claws on their forelimbs. They are the smaller and less sturdier of the two sloth families. Their range span falls between 2 kg to 5 kg and their length span between 40 cm to 80 cm.

They have distinct patterns of facial hairs and reduced facial muscles that impounds a perpetually smiling expression to their face.

Three toed sloths have forelimbs that are 50 percent longer than their hind limbs and they also posses stubby little tails used for craving out spaces before scatting.

The pelages of three toed sloths range from pale brown to grey to grayish brown as seen in the brown throated variety. Some species have manes running down their necks and spreading over their shoulders while others have orange to yellow patches covering their throat area.

Three toed sloths are also referred to as ‘ai’ (in latin America) which corresponds to the sound of the high pitched scream they generate when agitated.

They belong to the family: Bradypodidae and Genus: Bradypus. Four species currently exists which include:

What do three toed sloths eat?

Three toed sloths have a more stricter diet that the two toed variety. They are very choosy and picky and would only eat form the particular set of trees they learnt to forage from their mothers. All sloths learn what leaves to eat by licking the lips of their mothers as they chew.

Three toed sloths eat tropical leaves pretty much they way two toed sloths do and also drink similarly, all thanks to the striking resemblance they both share in anatomy and physiology even though some million years evolution states that they are very distantly related from one another.

In addition, three toed sloths have more flexibility than the two toed variety when it comes feeding orientation. They are able to turn their heads 270 degrees while hanging horizontally upside down from tree branches. This is aided with the addition of two extra pair of vertebral discs to their vertebral column.

The selective and vulnerable nature of three toed sloths is the primary reason why they are rarely kept in sanctuaries, zoos and other rehabilitation centers. When any casualties are taken in by rescue centers, they are quickly attended to and returned back into the wild as soon as possible.

Three toed sloths are in order words, very difficult to maintain in captivity.

Metabolism and Digestion in sloths

To breakdown chewed and masticated leaves: foods that are naturally composed of cellulose which are very difficult to digest and absorb into the body, sloths have a large slow-acting stomach composed of four chambers (just like ruminant animals) with myriad symbiotic bacteria to aid digestion.

Sloths also have and extremely slow rate of digestion and metabolic rate (three toed sloths in fact have the slowest metabolic rate among all mammals), to aid with breakdown and absorption of tropical leaves.

The extremely slow rate of digestion and metabolism in sloths along with their poor sense of vision are the primary reasons why sloths have evolved a slow paced lifestyle in the tropical trees.

Digestion in sloths is very slow. The entire process from ingestion to excretion may take anywhere from 157 hours to 1,200 hours.

For this reason, sloths only visit the bathroom once a week in a trip that is fraught with heightened risks of depredation.

Digestion in sloths can fail when the weather conditions around their habitats drop so slow that their temperature dependent stomach bacteria all die out, preventing them from being able to digest food and making the possibilities of individuals dying on a full stomach an interesting reality.

Most rescue centers and sanctuaries administer probiotics to replace the dead bacteria in a sloth guts. Others use a method known as “poop cocktail” which involves feeding the affected sloth with the faecal matter of another healthy individual. This method is only used in extreme cases of bacterial drought.

Metabolism is also very slow in both varieties of sloths, with three toed sloths being the mammals with the slowest rate of basal metabolism.

The metabolic rate of sloths is less than half the value expected for mammals their size, around 40 to 47 percent of the predicted value. Sloths evolved slow metabolism because of the nature of their forage: tough and toxic, suppling very little amount of energy while requiring an extremely slow rate of absorption.

This directly and indirectly caused for many physiological change within their bodies, the most prominent which include the overall reduction and restructuring of muscles tissues which are by default, energetically too costly to maintain.

The sloths stomach is made up of four compartments, perhaps to support the rigorous digestion of the tough leafy fragments. The sloths stomach is the center of digestion. It contains myopic bacteria which aid in the break down of tough cellulose material of leaves into nutrients absorbable into the blood stream.

The sloths stomach is constantly full (as a result of the slow rate of digestion and metabolism), and this forms the primary reason why sloths naturally eat very little on a daily basis: digesta must leave the stomach into the small intestine before new leaves can be sent in. And this takes anywhere from infinity to forever, metaphorically.

The stomach of the sloths and all of its contents, account for upto 40 percent of their total body weight. Excreta itself accounts for up to 30 percent of this weight. To support this enormous stomach on a tiny body, two toed sloths have 43 ribs in 23 pairs guarding it in.

Sloths defecate only once a week as a result of their extremely laggard metabolism and digestion. Reproduction is huge and rotten-banana-like in structure with a putrid smell slightly ‘deafening’ to the nostrils.

Urination also occurs at the instance of pooping. It is said that sloths can loose up to 1/3rd their body weight from a healthy scat. Such is the enormousness of their intestines and scat contents.

Two toed sloths can release their scats right from the canopies. The three toed variety almost always prefer to climb down to the forest floors to do so, often isolating spaces with their stubbly little tails. They climb back up as quickly as they can after completion of the bathroom process.

Cliffe. R. (2018, March 31). Starving to death on a full stomach. Retrieved from https://slothconservation.com/starving-death-full-stomach/