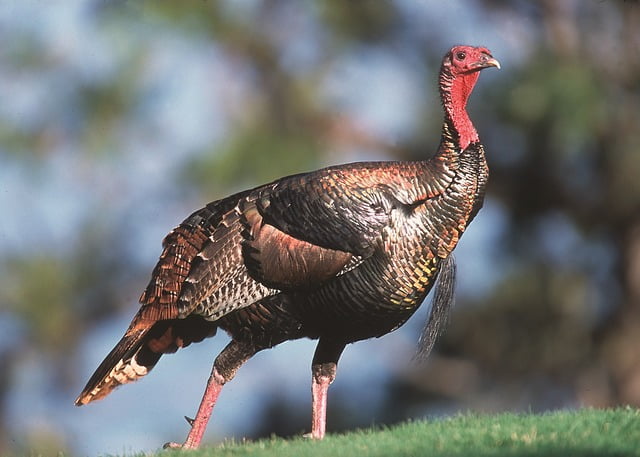 Wild turkey is a game bird species native to the continent of North America: prominent in the eastern half of the United states but also found in the Northern parts of Mexico, particularly in the Sierra Nevada mountains.

It is one of the two extant species of living turkeys, the other being the Ocellated turkey of the Yucatan Peninsula and not the domesticate variant you’re probably thinking of, because they’re actually one and the same thing. The primary difference is their habitats. The wild turkey, as the name suggests lives and thrives in the wild, whereas the domesticated turkey lives in a domestic setting.

In this article, we look at the different subspecies that wild turkeys are distributed into. They’re about six of them although one species is currently speculated to be extinct, but not on our list though. We’ll list all of them out first, then take them turn by turn discussing how they look like, their distribution, population estimates and their sizes.

The types of wild turkeys

Let us take each one of these subspecies to elaborate more on them.

Osceola wild turkey somewhat resembles the easter wild turkey although it is much smaller and has a much darker coloration on its plumage.

Males also have wattles or flaps colored red on their head which can bear intense shades of blue and white when excited, particularly during the breeding season, and females have heads that are bluish-grey. Only males of this species have beards.

The osceola wild turkey also has a very dark feathers on their wings and reduced amounts of white barring as seen on other subspecies.

As evident from the name, this turkey is chiefly found in the florida peninsula (the part of florida about two thirds, between the gulf of Mexico and the Atlantic Ocean).

Its territory overlaps with that of the eastern wild turkey on the Florida panhandle and the florida Georgia line.

The florida turkey is expected to have a population of no more than 100,000 individuals. This estimate however, may still  be flawed as it is very difficult to measure the population of this subspecies given their secretive nature and dense habitats.

The florida wild turkey inhabits a variety of habitats in their range with changing seasons. The fall and winter habitat for this species include bottomland hardwoods, wooded swamps, mixed pine hardwoods, hardwoods hammocks and cypress woods.

They are often found in scrub patches of palmetto and near swampy areas where salamanders are abundant.

Adults prefer to roost in cypress or pine trees with open limbs near water channels. Nestling is mostly observed under tree shades such as old field and pastures, and even under fallen trees. Brooding and parental care is observed in areas of shorter vegetations (i.e short hayfields) to ease foraging and detection of approaching predators.

Merriam’s wild turkey is a beautifully colored bird. Males have iridescent blue, purple, and bronze shades on their darkly colored feathers and their heads are colored blue and red, while females have dull feathers (useful for camouflage underbrush or on nests) and have bluish grey heads with more feathers present.

The rump feathers and the tips of the tail fan in males are somewhat pinkish white or buff colored. Females have breast feathers colored brown white while their wings have touches of white.

The merriam’s wild turkey has the shortest beard and spurs of all species of wild turkey.

Merriam’s wild turkey range includes high mesas of the Southwest, Rockies of the western North America, nearby prairie states and the Black Hills of Wyoming and South Dakota. The species have also been introduced into parts of Nebraska, Montana, Oregon, Washington, California, Idaho and Utah.

In the United states, their range basically covers the western states at higher elevations.

Merriam’s wild turkeys in mountainous areas inhabit ponderosa pine communities. In the summer, they prefer open grassland and cottonwood river valleys, and during winter, they inhabit foothills and forested areas.

Habitats such as oak forests, Pinyon pine, and juniper may also be used in the summer.

Nestling is observed in dense shrubs located at higher elevations which provides protection against climate and possibly predation.

The population of the merriams wild turkey is estimated at figure between 330,000 to 345,000 individuals.

Merriam’s wild turkey is very similar to the eastern variety in weight. Males can weigh between 18 to 30 lbs while females only weigh less than half of that range at 8 to 12 lb.

The south Mexican wild turkey is one of the smallest subspecies of wild turkeys and is thought to be critically endangered (as of 2010) or even extinct today.

In central mexico. Not found in United States or Canada.

About the same size as the florida subspecies.

The Rio Grande wild turkey derives its name from its habitat area. It’s a specimen with relatively long legs and paler colored plumage compared to other subspecies. They have bronze to copper iridescent sheen on their feathers and also have tan colored tips on their tail feathers.

The beards, spurs and gobbles of this subspecies are moderate in length.

Located in the central great plains or plains state located in the interior of North America: the south central state (Oklahoma, Kansas, Texas, Colorado, and New mexico), and Northern mexico.

The populations have also been successfully introduced into California, Oregon and Washington.

Rio Grande turkeys prefer habitats with an interspersion of wooded and open areas.  They inhabit bush areas near streams and mesquite, pine and scrub oak forests. They roost in tall hardwood trees with broad canopies and many horizontal limbs i.e oaks and hackberry.

The Rio grande wild turkey is the most populous of all subspecies with populations estimated at 1,000,000 individuals.

Males weigh between 17 to 22 lb while females weight between 8 to 11 lb. Poults weigh around 2 ounces at birth.

These subspecies resemble the merriam’s turkey in feathers but theirs have a metallic copper, greenish-gold, and bluish-green reflections instead. Rump feathers and tail fan tips are white, and bears and spurs are moderate in length.

Females resemble males in coloration but have duller colors to conceal them while nesting.

Like the rio Grande, this subspecies also have long slender legs.

Their range spans from central valleys, to the northern mountains of Mexico and the southernmost part of Arizona and New Mexico.

Populations are small in the United States but abundant in northwestern Mexico.

The Gould’s turkey is similar in weight to the eastern wild turkey. Males weigh between 18 to 30 lbs while the much smaller females weigh between 8 to 12 lb. New born chicks are relatively smaller at less than 2 ounce birth weight.

Males have iridescent gold and green sheen that reflects sunlight. Breast and body feathers are black to brownish and wings are cream colored with black or brown bars.

Females resemble males but have a much drab appearance for concealing themselves from predators while nesting.

The tail feathers are distinct from all other species; with a chestnut-colored and a dark chestnut band across the tip.

Males have the longest beards of all species.

Its range is the largest of all subspecies. Their range covers the entire eastern half of the United States, and in canada, the range extends into Southeastern Manitoba, Ontario, Southwestern Quebec and the Maritime Provinces.

For nestling, birds use field edges, upland shrubs and pockets of open woodlands.

Population estimates for this bird is between 5.1 to 5.3 million.