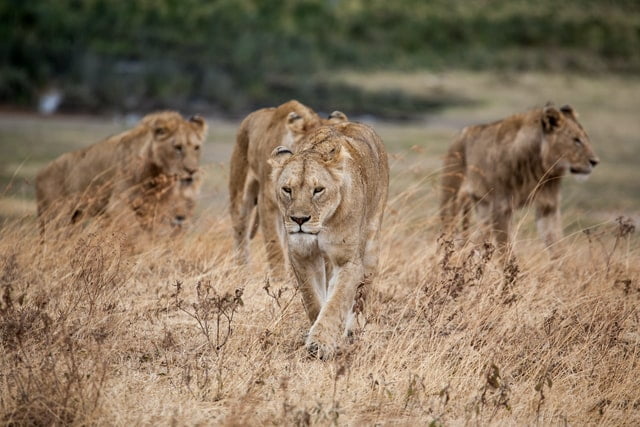 Lions are entitled the kings of the jungle for a reason, they have enormous raw power and strength they use to command respect throughout the perimeters of the woods they inhabit.

But that doesn’t mean they are the strongest, deadliest, and most feared creatures of the animal kingdom.

As a strange matter of fact, they are not. There are many species of the animal kingdom that are capable of giving lions a run for their money in a one vs one encounter.

Some are absolutely capable of crushing the heavy skulls of lions with a single blow, while others are slightly less as strong and resilient, but would stubbornly refuse to be taken down (without the attacker going down with them) or even be intimidated.

Some are even out of the question when it comes body size and strength. But they have highly effective tactics and features they use to drive off the predatory confidence of lions.

Today, we look at the top seven animals that are more than capable of killing lions in a one vs one encounter. Before we begin with the exciting enumeration however, it is important you bear the following few points at the back of your mind.

This list is meant for your entertainment purpose and therefore not restricted to encounters that can only happen naturally in the wild.

If you want to know a single animal that naturally prey on lions or attempt to deliberately intimidate them in a natural setting, the answer is zero to nought.

No single animal (in their right sense) within the savanna and grassland regions of lions would dare initiate an attack against them (in a one vs one situation). Hyenas seem to attack severely injured lions in their groups of 5 or more individuals, but would never dare initiate one with a healthy individual especially in a one vs one situation. So they too aren’t exceptions to the statement above.

The farthest any animal can go is attempt to respond to a predatory attack with a hoodwink reprisal or true reprisal (in which case the animal may successfully scare off the lion or even cause severe injuries to it’s body parts), or try and defend it’s freshly caught kill by any means, in which case the animal usually ends up being chased away or sometimes even becoming the second menu next to the first one.

With the above point aside, here are the top seven animals in the wild that are more than capable of defeating a lion in a staged one vs one situation.

Top seven animals that can kill a lion It shouldn’t be a surprise that our number one pick to defeat a lion in a one on one situation is the fastest snake in the world and one the most deadliest in Africa, the black mamba.

While there are many other snakes that are equally as poisonous if not more, the black mamba is our honorable pick to represent them all.

Black mambas are extremely venomous snakes found in the western and eastern part of Africa. They are super fast, agile, highly aggressive and territorial and their bites consistently pack an extremely potent neurotoxin venom, even that from a newly hatched baby.

A single hit from a black mamba is capable of bringing down an adult human in under 30 minutes. The record kill happened at a period less than 20 seconds.

How the black mamba wins:

The black mamba quickly approaches the hind or forelegs of the lion and repeatedly stabs with its lethal fangs while injecting a deadly dose of neurotoxic venom into the body.

After about 5 minutes or so of enduring the torture and harassment poised by the lion, the king decides its time for a rest and lays on the ground to take a nap.

After around 30 minutes or so, the king of a notorious empire falls for the unquestionable majesty of the slithering mamba (if the lion was kind enough to avoid biting the black mamba in two!). Second on the list is the largest land animal on earth, the elephant. They are extremely huge animals in comparison to lions (about 10x their size) which makes them very difficult to take down.

Even prides (more than 5) have a very hard time bringing down a sub-adult elephant talk more of a fully grown momma.

Pissed-off elephants are know to flip over cars, throw motorcycles and huge logs of wood at their aggressors using their massive bodies and trunks. They are very much capable of crushing almost anything at sight when they’re set into the mad mood.

Elephant uses its huge tusks and trunks (lined with thousands of powerful muscles) to continuously maneuver the lion within the perimeters of the fighting arena; throwing its body against hard boards, fallen trunks and cracked grounds.

The lion realizes that his strength and confidence are failing him, but before he’s able to completely gather his thoughts together for a second plan, the elephant, out of paramount love for the king’s throne, steps on the lions head (with a gigantic feet) to force out victory from the broken skull. Weighing between 800 to 2,000 kg, lions are no match for rhinos at mere average of 190 kg (for the larger males) in a one vs one confrontation.

Rhinos are very strong, fast for their weight, huge and have a very thick skin that can stretch up to 5 cm in length, making it very difficult to pierce through even with a teeth as sharp as that of a lion.

Rhinos also have pointy horns positioned at a defensive position; at the top of its nose, in order to allow them to easily impale their aggressors.

How the rhino wins:

Bringing a suffocating and rampant ‘attack and flee’ chase down within the boundaries of the fighting arena to an end, the rhino finally connects its horn to the underside of the lion which impales instantly and cause instant damage to vital organs.

The rhino picks up by the horn the pitiful remains of a trounced king and shows it to the animal kingdom watching from the distant stands. The rhino is voted third in line to the kings throne. Hippos are everything to fear. They have bite force capable of cutting a mature crocodile in half, and bodies and skin as big and thick as those of rhinos respectively.

Despite their stocky shape and short legs, hippos are very fast runners and can charge at speeds of up to 30 kilometers per hour over short distances.

In the wild, lions never dare to attack adult hippos in a one on one encounter as there is a high change the efforts would be in vain or things could even go worse. Members of a lion pride only gang up on weak, injured or juvenile hippos by splitting themselves in two groups, with one group attacking the baby hippos with the others attempt to distract the mother.

After continuously being circled around and climbed over on numerous occasions, mr hippo finally gets a hold of the lions head within the corners of its mouth. Using the sturdy and humongous teeth present within the mouth cavity, they hippo crushes the skull completely with a fast head-wiggle. A very interesting match up, one that we are really looking forward to although the chances of it happening in a natural setting is zero.

Our pick to win is of course the polar bear; a large aggressive male boar having paws the sizes of dinner-plates and capable of making humans unconscious with a single paw hit.

Polar bears are the largest four-legged predators that are comparatively bigger than lions. Males typically weigh around 300 to 500 kg while females weigh half that size. Male Lions (which are the biggest of both sex) only weigh slightly more than half that size.

Polar bears are very strong and aggressive predators and they kill their seal preys by dragging them out of the frigid waters and crushing their skulls with their large canine teeth.

They may not have the bite force of a big cat like the lion, but they are equally if not more stronger, bigger and aggresive of the two.

Polar bears can easily pull seals weighing around 200 to 300 kg from the water using only their mouth, and they have also been documented pulling masses as large as bermuda whales.

Polar bears never hesitate to charge at hunters possessing guns or other deterrent, and don’t even run away when rounds are fired into the air or straight at their direction. Do you think a lion has an appreciable chance against an adult male boar?

After about 15 minutes of intense wrestling for supremacy, the polar bear begins to dominate the fight. It continuously hit the lion with its strong paws on the head and this gradually shatters the bones of the skull piece by piece.

The polar bear after beginning to subdue the lion with the aid of its paw hits, goes for the final kill by biting hard on the lions head and further shattering the morphology of the skull. Siberian tigers might seem like a fair and equal match for lions but they’re actually a death sentence in disguise.

These tigers are naturally bigger and stronger and have been observed to kill lions in the past. So an adult tiger vs an adult lion is most appropriately a 60/50 affair in favor of the tiger.

Both tiger an lion battle intensely for several dozen minutes, inflicting severe and several wound on each other. However, because the tiger is much bigger and naturally more stronger than the lion, it finally gets a hold of the situation and subdues the lion by swiping against its neck to cut off blood vessels. Hahahahahah. Crested porcupine, are you kidding me??

Sorry to say this, but no we’re not.

Yes, everybody knows that the crested porcupine is no match for the impressive physique of the lion. But there’s a feature that porcupines have that lions wish they had and also hate the prospect of a dinner on it. It’s the spiky spiky hairs.

In one on one encounters that often occur in the wild, porcupines attacked by lions almost always get killed at the spot, but they often make sure that their deaths are memorable and filled with lesson for any wise lions to learn from. They shoot sharp and pointy spikes into the faces and bodies of their aggressors, one which when removed causes injuries that are highly infection prone.

The porcupine is tosses around like the balls on a snooker table and harassed for the first heavy minutes of the battle. When finally cornered and about to meet with their ancestors through the hands of the lion, the porcupine sends sharply pointed spikes directly into face of the lion as a final parting gift.

The porcupine is killed and part of it’s tasty meat devoured by the lion. The lion is declared the winner of the battle.

After some weeks, the wounds from the spikes get seriously infected and the lion eventually dies of severe infection, the porcupine celebrates the lions demise with its different looking ancestors.