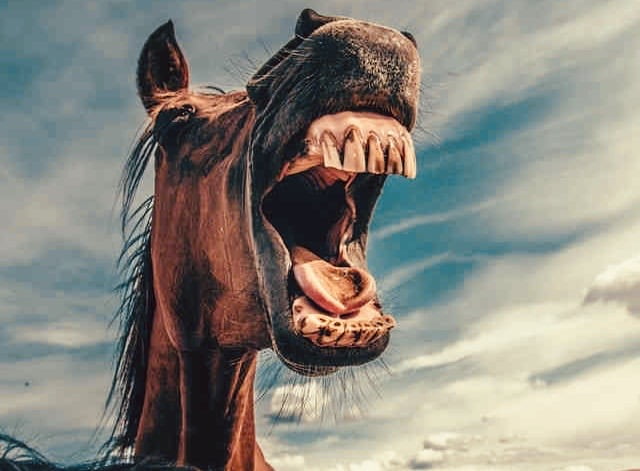 What animal has the most teeth?

The polka dotted whale shark is the animal with the most number of teeth. It has very broad, frog-like jaws that contains roughly 27,000 teeth arranged in more than 300 tooth rows. Second place is the requiem bull shark with approximately 350 teeth, and third position is the great white shark with roughly 300 serrated teeth.

The teeth of the whale shark

True teeth are hard and intensely calcified papillae that are white or slightly yellowish in nature and are implanted into the jaw’s alveoli bone.

These hard resistant structures are only peculiar to the living phylum of vertebrates, and thus, it’s only natural that the animal with the most amount of teeth crop up from there.

The gigantic whale shark (Rhincodon typus) in all its polka dotted vastness, is perhaps the animal with the most number of ‘teeth’ visible on a jaw at once. It has a huge frog-like mouth that measures up to 72 inches (or 6 feet) across, and accommodates as much as 27,000 individual tooth. The teeth are arranged in more than 300 tooth rows along the inner surface of the upper and lower jaw.

Now back to the whale shark teeth…

In comparison: (still on the the whale shark teeth) most average-sized sharks only have about 20 to 30 tooth rows occurring somewhere between two to seven series. This configuration results in about 80 to 420 individual tooth enclosed within their mouth at any given time.

Sharks basically have a rotational toothing system where their teeth constantly shed out and are being replaced throughout their lifetime.

The vestigial teeth of the whale shark

Despite having such tiny supernumerary tooth that each grow about one-eight of an inch or 3 millimeters in length and rival the size of a match head, whale sharks do not appear to implement their teeth for any apparent purpose: whether feeding or terrorizing aquatic animals.

In fact, and in contrast to their teething system, whale sharks are well-built suction-feeders and ram filters that primarily consume planktons and sometimes occasionally feed on larger nektonic preys such as small schooling fishes, squids, mackerels and even small tunas.

They forage for food at or near the surface of the ocean and they feed by pumping food-bearing water over their spongy filter plate when they open their wide mouth, or by ram filtering beneath the surface. A juvenile whale shark can consume up to 21 kg (or 41 pounds) of planktons per day, adults definitely eat way more.

For such a mammoth sea creature well-equipped with thousands of sharp, cuspy teeth, choosing to feed on relatively smaller marine organisms such as phytoplankton and macro-algae and not on larger fishes or medium sized sharks of the oceans may seem very contrasting and really strange. However, such affair has been proven to be highly advantageous especially from an energetic standpoint.

Because whale sharks hardly ever use their teeth for feeding or any other meaningful purpose, some Ichthyologists consider them to be non-functional vestigial structures, remnants of what used to be the teeth of their archaic ancestors.

Second is the requiem bull shark

Second to the elephantine whale shark (in terms of tooth numbering) is the requime bull shark (Carcharhinus leucas) also known as “Zambezi shark” (informally “zambi”) in Africa, and “Lake Nicaragua shark” in Nicaragua.

These aggressive and very dangerous brackish water occupants have up to 50 rows of teeth occurring in seven series. This brings their total teeth numbering to about 350, with at least 50 being functional at any given time.

Requiem bull sharks have the most powerful bite force, weight for weight, among all cartilaginous fishes (at 6,000 newtons or 1,349 lbf). The average adult human only generates around 900 to 1300 newtons.

They have a needle-like teeth morphology (characteristics of all predatory and flesh ripping sharks), and they use this sharp triangular see-saw teeth along with their agile nature to attack and tear up almost any sizeable living and breathing organisms they can pounce upon, including medium sized fishes and other juvenile bull sharks.

Bull sharks feed primarily on bony fishes, turtles, birds, string rays and other smaller sharks and they can replace their snapped or fallen tooth up to 50,000 times in their lifetime.

Bull sharks have one really interesting survival adaptation for escaping their predators, they simply regurgitate food from their stomach out into the open waters to serve as a distraction and then capitalize on the opportunity (when their predators begin feeding on the retch up) to escape far away.

Third is the largest predatory fish on earth: The Great White Shark

Third position for the worlds toothiest animal is held by the largest predatory fish on the face of earth: the great white shark.

These somewhat aggressive and highly adapted predators can have up to 300 needle-like, serrated and triangular teeth arranged in numerous rows within their mouth. They feed mainly on sea lions, turtles, small toothed whales, porpoise and carrion.

Fourth is the long beaked dolphin

The fourth most toothiest and last on our list are the Nomad of the oceans: dolphins.

Long beaked dolphins can have as much as 240 conical shaped teeth in their mouth at once. They use these teeth to grip, hold and secure their prey to either swallow them directly or crunch on their bodies. Their diet includes turtles, sardines, mullets, small schooling fishes, mackerels and many small to medium sized marine animals.

The animal with the most amount of teeth on land is the giant armadillo, having up to 74 individual tooth encased within its mouth at any given time. It also happens to be the most toothiest mammal in the world. Second to the giant armadillo is the opossum which has a tooth count of 50. Humans only have 32!

The thousand and one teeth of invertebrates (Molluscs)

If the term ‘true teeth’ is loosely augmented to incorporate the definition; any structure located in the mouth, regardless of it’s chemical composition, that aids the break down of food items into ingestible, digestible and absorbable constituent, then mollucs or rather snails, snugs, limpets and other relatives alike would be the only befitting candidates for the title of the most toothiest animal in the world.

Unfortunately however, such isn’t the case and the term teeth is more narrowly and strictly defined to mean the hard and calcified structures exclusively found in the mouth parts of only vertebrates.

Many non-vertebrates have structures in their mouth that are homologous to true-teeth found only in vertebrates, and most of these structures help them in the break down of relatively larger chunks of food for better digestion and nutrient absorption.

Slugs are one such invertebrates with several rows of tiny teeth-like structures (spiky to the imaginary feel) located on a special ribbon feature called radula. They belong to the Gastropoda family (a generally ‘toothy’ bunch of creatures), together with limpets and snails.

Slugs can have upto several thousands to even hundreds of thousands of these ‘teeth-like” structures incorporated within their mouth. The teeth-like structures often incorrectly interchanged with the term ‘true teeth’, and sometimes (alongside the supporting radula) with the term tongue, are made up of ribbons of chitinous substance which is the same material that makes up the exoskeleton of insects.

The teeth-like structures are fine, flat, almost identical, and consist of three sections: the base, the shaft and the cusp.

They are used by both carnivorous and herbivorous Gastropoda Molluscs for feeding. The feeding process occurs when the Gastropoda Mollusc stick out their radula and cut, scoop and scrape off food particles from the feeding surfaces and convey them through the oesophagus, directly into the digestive tract.

Similar to the conveyoy-belt teething system found in sharks, all Gastropoda Molluscs have an unending supply of spiky chitinous teeth through out their lifetime.

As the teeth-like structures at the front of the radula wear out by action of constant scraping on rough surfaces for food, newer ones produced at the posterior end of the mouth are slowly brought forward (by action of the slow movement of the radula ribbon), to replace them.

Depending on species, teeth production and replacement can be as rapid as a day, and some species can even produce up to five rows in such session.

As of the Gastropoda species with the most amount of spiky chitinous teeth, the crown goes to the colorful underwater umbrella slug. These sea creatures can bear an impressive 750,000 teeth-like structures on their radula for the entire period of their lifetime.

Bunu. (2020, April 16). What animal has the most teeth? Retrieved from http://emborawild.com/what-animal-has-most-teeth/