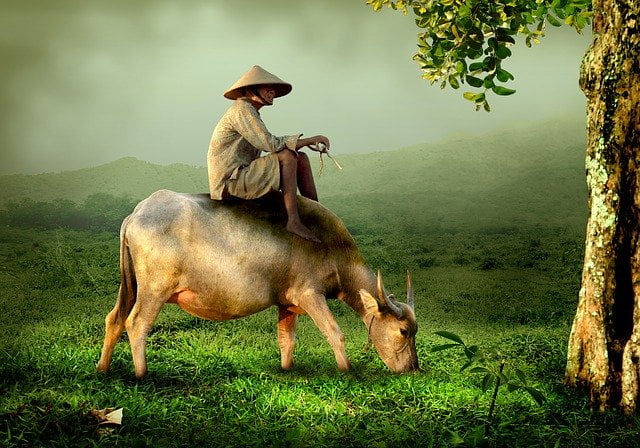 In this article, we discuss everything there is to know about herbivory. We point out all the different types of herbivory and the popular animals that are classified in each group.

We also note down some of the adaptations that herbivorous animals have evolved in order to support their diet type and then conclude out with the enumeration of other types of feeding behaviors found in the animal world.

What animals are herbivores?

The term herbivora is a concoction of two latin words, herba meaning a small plant or herb and vorare meaning to eat or devour, together, they spell out the term plant eater, which the herbivore is exactly.

Herbivores subsist primarily on plant matter, deriving all their nutrients and energy from it.

As such, herbivores represent the primary consumers in the food chain (an energy table showing how energy is transferred from one organism to the other), feeding on the primary producers which are the plant material themselves.

Different herbivore species focus and feed on different type of plant material which calls for another classification within the general herbivore group. Note that there are some herbivores with a more flexible means of sustenance, and therefore have a more varied diet comprising of many plant materials as opposed to just one specific food item.

Herbivores can also be broadly classified based on their feeding strategies. First are the grazers; those in which their diet consist of about 90% grass or low vegetation, second are the browsers, those that eat leaves, shoots, nectar, wood, seeds or fruits from high growing wood plants, and lastly are the mixed feeders, those with liberty to expand their diet into both category above.

Only herbivores (and sometime omnivores) can eat autotrophs (the main source of energy) and break them down into nutrients absorbable into the bood stream.

Carnivores cant do that, and that’s the reason why they rely directly or indirectly on herbivores to do so; by pouncing on them and absorbing their nutrient rich organs to absorb these nutrients from the autotrophs (primary producers).

Without autotrophs, herbivores wont be able to survive and without herbivores, there wouldnt be no omnivores or carnivores.

In short, life on earth would cease to exist since this complex feeding relationship (i.e dependence on plants or photosynthesizers) is what sustains every single consumer (or animal) in the universe.

Herbivores have adapted to eating their tough and sometimes toxic plant materials in many ways from mouth parts to digestion.

The teeth of most herbivores are mostly wide and flat which aid rasping or grinding of leaves, tree barks, and other tough plant tissues. In contrast, carnivores have pointy canine for tearing up the flesh of herbivores and other carnivores alike.

When it comes to digestion, most herbivores have cellulose digesting bacteria in their stomachs that helps them digest tough plant cellulose for nutrient absorption.

Plant matter is generally more difficult to digest than prey animals thus the critical need for such decomposers. The digestive system of most herbivores is also long and extended and can be sectioned into more than one chambers to provide space and time for food to completely break down and be absorbed.

Herbivores that posses more than one stomach chambers are referred to as ruminant animals, and they usually engage in complex feeding behaviors to aid proper digestion of the plant that they eat.

They often regurgitate and chew food to help with the digestive process. After regurgitating and swallowing their food, it is sent to the second chamber in their stomach to soften up.

After that, it is regurgitated and chewed and then sent back into the third chamber and then finally into the fourth chamber before going into the intestine for absorption.

The herbivores of the animal kingdom

Herbivores are not in anyway restricted in size and family. They can range from the very small wing beetle to the largest animal to ever live terrestrially, the African elephants.

Herbivores can be mammals, insects, birds, invertebrates and reptiles.

Not all that eats plant is a herbivore

The term herbivory is often used to represent only the higher class of living organism which are animals, excluding fungi, bacteria and protists that also eat plant materials.

Their browsing is more commonly referred to as plant pathogens and those that feed on dead plant materials are called saprotrophs. Plants that occasionally feed on other plants are usually termed parasitic plants rather than being called herbivores.

Other forms of feeding strategies in animals

Omnivore: Animals like humans that feed on both plant and animals matter but usually have more preference for one.

There are two types of carnivores namely:

Bunu. M. (2020, May 27). What animals are herbivores?. Retrieved from http://emborawild.com/what-animals-are-herbivores/