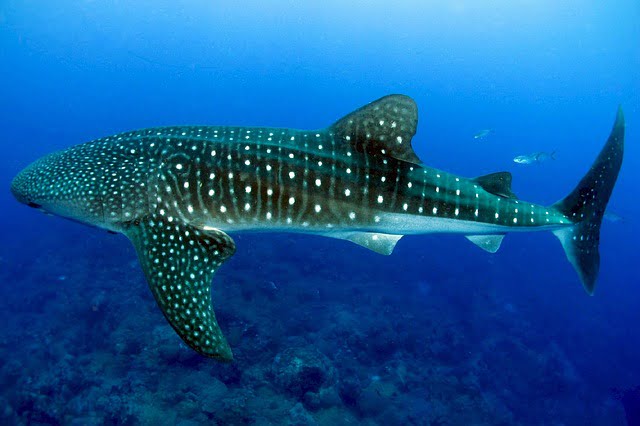 Whale shark is a huge species of shark (not whale) that is found in the open waters of tropical oceans. It is a slow moving shark that has an extremely voracious appetite for its primary prey in its habitat.

In this article, we discuss everything there is to know about the forage choice and habit of these ocean monsters. We also discuss the reason for the selection of such diet, and conclude with the different feeding methods whale sharks employ during foraging.

What do whale sharks eat?

Whale sharks feed primarily on zooplankton such as krill, crab larvae, fish larvae, copepods, shrimp, fish eggs and chaetognaths. They also feed on phytoplankton such as algae and other plant materials when their primary food items are unavailable.

The diet of whale sharks — the animals scientifically known as (Rhincodon typus), consists largely of planktonic creatures such as shrimps, fish larvae, crab larvae, copepods and other tiny marine invertebrates, but researchers also think that their diets may actually be more varied than thought, and forage may also incorporate small nektonic organisms such as mollusks, sardines, tunas, mackerel, small schooling fishes, and also of algal phytoplankton and even kelps.

Regardless of whether phytoplanktons and nektonic species are on the whale shark’s menu or not, to the reader, it still doesn’t makes any sense that such a mammoth sea creature selectively choose to feed on some of the smallest organisms of the oceans when wide varieties of meaty and more sustainable preys such as sharks and other smaller whales exist.

But first, there’s something that you don’t know. The reason behind this genuinely odd preference can be fully understood by examining an interesting biological concept called the “ten percent rule”.

But before we go into details, you first need to understand another concept called the food chain.

What is a food chain?

A food chain is basically a sequence showing the transfer of nutrients and energy from one organism to another.

A food chain always starts with a bottom level organism referred to as the producer, and ends with a tertiary consumer or a quaternary level consumer otherwise known as the apex predator (the final consumer).

Producers also known as autotrophs or self feeders, use energy derived from sunlight to produce their own food. They serve as the base (or more appropriately the foundation) of every single ecosystem on the planet and without them, no other living organism can flourish or derive sustenance. Producers include photosynthetic organisms such as plants, algae, or cyanobacteria.

In such manner, sustenance is achieved and every single ecosystem on the surface of the earth flourishes.

Now since we’ve fully understood the first part of the puzzle, how energy is transferred from one organism to the other on a food chain, the only thing left now is to cognize how much of this energy is actually being transferred from one organism to the other, and then we can pull pieces together and comprehend why whale sharks particularly choose to feed on tiny planktonic and phytoplankton creatures and not on larger marine animals.

So the big question, how much of this energy is transferred along from one trophic level to the other, from plants to herbivores and then to carnivores?

The whale sharks, being the zenith of the aquatic food chain, would then be left with very little amount energy that would hardly sustain it.

To avoid such energy restriction, whale sharks evolved to feed directly on the second trophic level consumers (the planktons or crustaceans) and sometimes even directly on the primary producers themselves, as some scientific literatures claim.

This way, the whale shark significantly cuts down the trophic level (or energy loss) from the primary producers all they way to itself, making only large units of energy readily available to it.

Whale sharks are known to be very selective with their diet and can migrate to plankton rich areas, perhaps with the aid of their fairly good sense of smelling, to actively feed on planktons there.

How do whale sharks eat?

In all these feeding behavior, one thing is common; the capture and filtering of prey from food bearing water using the whale’s sieve like structures referred to as filter pads.

Researchers believe that whale sharks use a method of filtering known as cross-flow filtration to separate food from water.

In this process, the food bearing water flows into the mouth and makes contact with the sieve like structure (or the filtering pad) at an angle, almost nearly parallel to it.

The water is sieved out completely while most the food particles skim over the top of the pad (because of the angle at which the water is striking the pad) and collects at the rear end or back of the throat, ready for swallowing.

Every so often, the lower filtering pads of the fish gets clogged by food particles blocking the spaces, and the whales sharks rise to the surface of the water and cough, releasing bolus of whiteish substances (or rather food particles) from its mouth.

This helps unclog the filtering pads, and has been observed to occur every 3 to 13 minutes during feeding.

The three types of feeding behaviors of whale sharks.

In this mode of feeding, the whale simply lurks onto the surface of the ocean and swims forward (at a speed roughly about 1.2m/s) ramming plankton bearing water into its mouth and filtering out the food using its gills.

This is basically the mode of feeding found in most baleen whales. In the method, the whale goes below the surface of the ocean and swim forward with its mouth wide open in order to gulp plankton bearing water. No suction involved.

Whale sharks do not drink water in the sense that they ingest it with their mouth.

They have a high concentration of salt than water in their bodies and thus only require very little amount of water for sustenance.

Whale sharks naturally quench their thirst by absorbing little water through their gills, “by means of osmosis; because they are naturally more salty that their surrounding environment”.

How much do whale sharks eat?

Whale sharks have been observed to feed for approximately 7-8 hours of their time in the ocean, and are known to fast for up to three months.

What do whale sharks eat in captivity?

Whale sharks are feed in captivity diet the same diet as they are in the wild; planktons, lots and lots of them.

Whale sharks are one if not the most friendly sea creatures out there. They‘ve evolved to feed primarily on smaller sea creatures such as planktons and phytoplankton and ignore the larger and more meaty ones.

This means that a whale shark would hardly ever try to eat a human diving in the water next to it. If at all, under some sort of magical spell, a whale shark decides to do so, then they wouldn’t be able to chew nor swallow as they have vestigial teeth that are as tiny as a match head and filter pads that can only sieve out organisms as large as millimeter.

In the end, they’ll still end up vomiting the human, although the sharp spiky teeth are more than capable of causing moderate injuries.