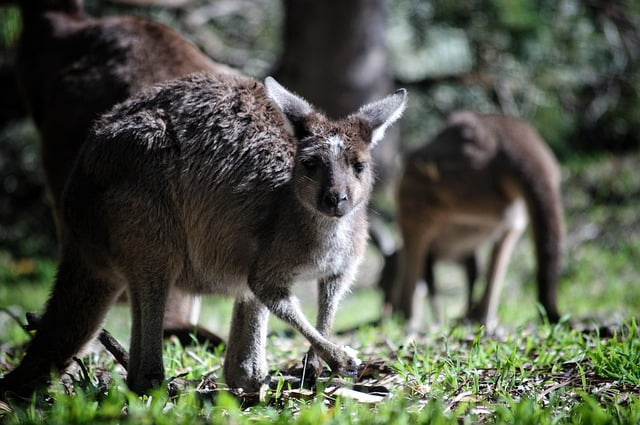 Apart from indigenous Australians (and some 55 isolate countries along with pet animals around the world) that love to explore the tender and strongly flavored tissues of the kangaroo meat; which is high in protein, extremely low in fat and is a good source of vitamins and minerals, very few predators out there have actually developed a taste for the hopping thighs and ever boxing limbs of the kangaroo.

In this article, we’re going to be discussing about these few natural predators of the kangaroo. We’ll conclude with some of the adaptations that kangaroos have made in order to defend themselves against their predators.

Very few animals in the wild naturally prey on kangaroos. The predators are mostly the  introduced and invasive types such as: dingoes, foxes, feral cats, domestic and feral dogs and the wedged tailed eagles.

Introduced here simply means that the animals that were originally non-natives of Australia but have been introduced there either deliberately or accidentally, which are now plaguing the range that they inhabit.

All these species mostly pounce on juvenile or sub-adult kangaroos as they often start out relatively smaller compared to their parents, and usually take a decent amount of time to fully outgrow and overpower their predators like their parents. In other words, to grow into adults capable of defending themselves.

Among fully grown and experienced adults, females are the more likely to be preyed upon due to their naturally smaller and weaker nature. They weigh just around half the sizes of their male counterparts.

A vast majority of male kangaroos hardly ever suffer any depredation events throughout their lives in the Australian wilderness. They are the largest species of marsupials found in Australia and are always bigger and overpowering than their predators.

Male kangaroos can give a hell of a whooping to their aggressors if threatened or disturbed. We’ll get to their defensive adaptations in a moment. A excessively large male kangaroo can weigh as much as 90 kg and stand 2 meters tall.

The extinct natural predators of the kangaroos.

The Tasmania tiger or Tasmania wolf as it was also called, was one of the main natural predators of kangaroos in the wild before it went exticnt due to intensive hunting supported by bounties in the 1930’s.

It was also a marsupial like the kangaroo and even possesed pouch on its abdomen for nurturing its young, similar to the kangaroo.

The Tasmanian tiger was a formidable apex predator which meant it had no natural predators to fear, and it preyed heavily on kangaroos living in mainland Australia, Tasmania and New Guinea. It’s diet also incorporated wombats, wallabies, possums, and birds.

The tasmania tiger went extinct 2000 years ago. It looked like a cross between a cat and a dog.

Like the Tasmanian tiger, the marsupial lion was a carnivorous marsupial too. It lived in Australian about 2 million to 46 thousand years ago where it heavily depended on its close relatives; the kangaroos and wombats, alongside other smaller mammals and reptilian eggs for sustenance.

The marsupial lion was the size of a small lion at 101 to 130 kg, but were at that time, one of the largest mammalian predators in Australia.

The megalania was a giant monitor lizard that inhabited southern Australia around 1.5 million to 40,000 years ago.

Scientist speculate that it may have stretched around 5.5 meters long and weighed an average of 575 kg.

The megalania was venomous and it used its toxins to hunt down preys which included the kangaroos living in Australia as at then.

The wound sustained from its bite by their preys, gushed out blood continuously as a result of the injected venom acting as an anticoagulant. This caused the prey to have a rapidly reduced blood pressure which eventually lead to systematic shock.

The megalania is thought to have gone extinct as a result of climate change.

Wonambi are genus of constrictor snakes like pythons and boas that became extinct some hundreds of thousands of years ago.

They were five to six meters long snakes that lived in natural sun-traps besides local water holes where they lie silently and ambush kangaroos, wallabies and other animals that approached to drink water.

The extant natural predators of kangaroos (most are introduced species):

Dingos introduced themselves (or rather were introduced) into the Australian continent around 5,000 years ago.

Since then, their populations have exploded and some scientist are now of the belief that this land plague was responsible for the extinction of a handful of native species in Australia such as the thylacine, Tasmania devil and even the Tasmanian native hen.

Dingos are medium-sized dogs possessing a lean hard body adapted for speed, agility and stamina. The tooth morphology of the dingo expounds on the fact that it consumes a wide variety of preys among which includes kangaroos even those the sizes of the red kangaroo species.

Dingos hunt in pack and are generally faster than their kangaroo prey. They mostly prey on juveniles and sub-adults although a large pack can effortlessly take out an adult male.

Their name comes from the wedged shape of their tails. They have a large wing span of up to 2.84 m and length up to 1.06 m.

The wedged tailed eagle is an opportunistic bird of prey that commonly feeds on small sized native mammals such as rabbits, brown hares, small kangaroos and wallabies of different species, and occasionally on larger introduced species such as feral cats and foxes.

The wedged tailed eagles glide attacks its prey and can hunt in packs, the method they often use to distract mother kangaroos from their joeys or drive away mobs to isolate the weaker animals.

Wedged tailed eagles can also feed on kangaroo carrion and are most often observed doing so than preying on a live one.

Red foexes were introduced in Australia as early as 1833 for the purpose of the traditional english sport of “fox hunting”. Today, the species population has grow so much (and it is still growing) that it poses a lot of economical damage and conservation causes problems.

Red foxes occur in a population of more than 7 million individuals spread across the entire landmass of Australia, and have been directly linked to the extinction of many native species such as animals in the Potoriodae family and the desert rat kangaroo and the decline in population of many species too.

The red foxes today hunt and and kill kangaroos they can over power within their range along with other marsupials and birds. They especially target baby kangaroos and any medium sized kangaroos because they are the easier ones to take down.

Feral cats are domestic cats that are not owned by anybody. They often shy and reserved and avoid human contact as much as possible, although they may become used to people making efforts to regularly feed them.

While the feral cat is a prey of the feral dog some birds of prey and dingoes, they are known to be predators of many vertebrate and invertebrate animals in australia including marsupials like possums and little kangaroos.

Feral cats usually take on small species of kangaroos and often on weaker and baby individuals when the opportunity presents itself.

Like the feral cat, the free ranging or stay dog is not confined to the perimeters of a house or environment. Their population is estimates at around 900 million worldwide.

The feral dog preys on a wide variety of animals it can find including kangaroos that are medium sized, i.e the easter grey kangaroo.

Goannas are reptiles native to Australia and southeast Asia. They are bulky animals with sharp teeth and claws and can grow up to 2.5 meters in length. They normally prey on small animals such as insects, smaller reptiles, snakes, mammals and birds, but can also be scavengers of rotten carrion or meat within their habitats.

Large species of Goanna or monitor lizards can easily prey on medium sized kangaroos and bite off chunks off them to eat like feral dogs do.

Kangaroos have stunning adaptations to ward off their predators. Here are some.