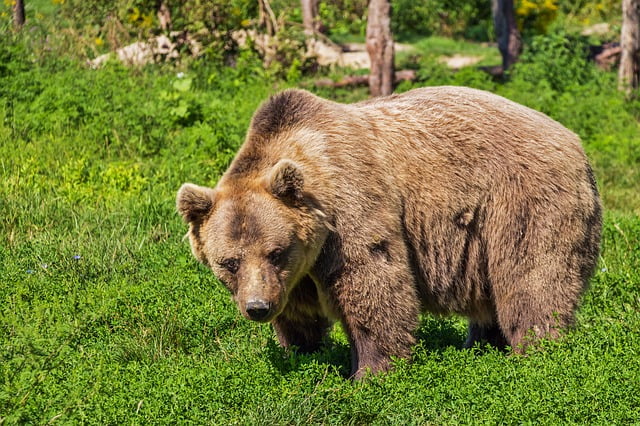 This article discusses when northern bears retire into their dens and begin hibernating. It also discusses to a brief extent, the process of hibernation in bears. For a more detailed article on how bears hibernate, you can scroll down to the bottom of the page and click on the first link.

When do bears hibernate?

Most Northern bears retire fully into their dens and begin hibernating around the frosty periods of late October to early November.

This corresponds to the brief, chilly and transitional season of mid-autumn or fall which surfaces immediately after the summer in the Northern Hemisphere.

Entry into den is mostly influenced by severeness of external conditions such as weather and snow, rather than an internal biological clock that sounds the alarm.

Scientist have discovered that den entry in bears can vary by as much as one month from the period of early October.

While a chunk amount of Northern bears hibernate during the winter season, not all of bear species occupying the arctic and temperate zones of the world actually observed hibernation in winter.

Some species like polar bears of the arctic circle choose to remain completely active and undergo a phenomenon called “walking hibernation” during winter.

Walking hibernation simply means to actively reduce metabolic activity while continuously foraging for any food winter has to offer.

The primary goal of the metabolic depression is to conserve energy. This strikes similarities with the reason why Alaskan bears, and all other bears observing hibernation in much lower latitudes reduce their metablic rates too.

Even though the state of the animals in both type of hibernation greatly contrast; one is wake and the other is deeply dormant, the main goal is still to conserve energy as much as they can until food becomes available. This justifies the reason why the term ‘hibernation’ is present in the phenomenon ‘walking hibernation’.

For bears that happen to hibernate during the winter season, entry into their dens happens around early to mid autumn which corresponds with the browny period of October to November.

They begin hibernating almost immediately or days after their entry and continue to do so (with one or two involuntary breaks) until the productive vegetation of spring arrives.

Before entry into hibernation, with just about a week or so remaining, bears usually stop all foraging activities and move over to the vicinity of their dens where they become ‘even more lethargic’.

This helps preparing them for the long winter nap they are about to undergo. During this period, bears hardly eat anything and only choose to remain asleep for the most part.

Bears become “even more” lethargic because a lethargic spell has already been cast upon them months before.

A compound in their blood called the “Hibernation Induction Trigger” senses the onset of winter through overt cues such as dwindling food resources and dropping ambient temperatures, and then signals this information to tissues and organs in the body to begin preparation for hibernation.

In response to this signal and also as an effect, many physiological and behavioral changes begin to occur with the bears.

They become extremely hyperphagic, consuming larger amounts of food than they would in the summer and deposit majority of the energy gained as fat reserves.

They gain a lot of body weight during this period and grizzly bears have even been observed to gain as much as 10 pounds per week during this period. This fat reserve, both brown and white is what strictly fuels the hibernating bodies of bears for their entire period of dormancy.

At the same time when the bears forage intensely and consume any food they can find voraciously, they also begin excavating dens or searching for a perfect place both insulate and safe from predators to spend their winter. This is where they’ll curl up like a mountain of ball and spend the rest of the winter inactive.

In the bears system, many physiological changes begin to happens. Bodily activities like breathing and pumping of blood begin to decrease at a very slow rate. Metabolic rates also begins to decrease and heat rate also slows down.

By the time the bears retire to the vicinity of their dens, these repressed activities must have slowed down by a decent margin. So they become weak and lethargic and also lack any interest for food and water. They develop the temporary habit of sleeping frequently and they do so for the most part of the one week.

When snowfall becomes it’s severest and tempreatures become extremely cold, bears retire finally into their insulate and protective dens. They curl up their bodies like balls and remain dormant with their heads positioned inwards. This helps trap heat and keep the bear warm.

While in their dens, and in their ready-to-go sleeping position, bears begin actively repressing the already decreasing bodily activities in a consistent but not drastic manner. This triggers them into a state of dormancy.

Their heart rates begin to slow, body temperature decreases, breathing reduces and metabolic rates repress. By early january or so, the activity depression would have reached its peak.

Heart rate also decreases from a high 50 beats per minute in November to around half that value or less in early January. Body temperatures that dropped by around 12 degF of the normal value usually never drops any further throughout hibernation.

All these depression of physiological activity enable bears to survive solely on their fat reserves until winter is over.

It effectively suppresses their hungry sides and quenches down any thirsty that would normally have built up within them.

Bears periodically awaken to move around, change positions and stretch their bodies during hibernation. But while awake, most of them hardly ever defecate or urinate. Arousal in bears can happen as often as once every 100 days or more.

Emerging out of dens; How long do bears hibernate?

Bears emerge out of dens depending on the climatic conditions of their denning areas. Mexican black bears for example, mostly never have to hibernate at all or only do so for a brief period of few days or weeks because of the relatively warmer climate of mexico even during winter.

For climates than get really cold during the winter season, i.e the Alaska or canada climates, bears remain in hibernation for much longer. They can hibernate for as long as 6 to 8 months, which happens to be from late October to early may.

Bears in addition to their natural waking time, can also emerge out of their dens due to physical occurrences such as flooding or collapse of their dens.

So emergence of bears out of their dens depends on latitude, with bears living in higher latitudes denning for much more longer durations than bears denning in lower latitudes, and also on external factors such as predation and natural disasters like flooding and collapse of dens.