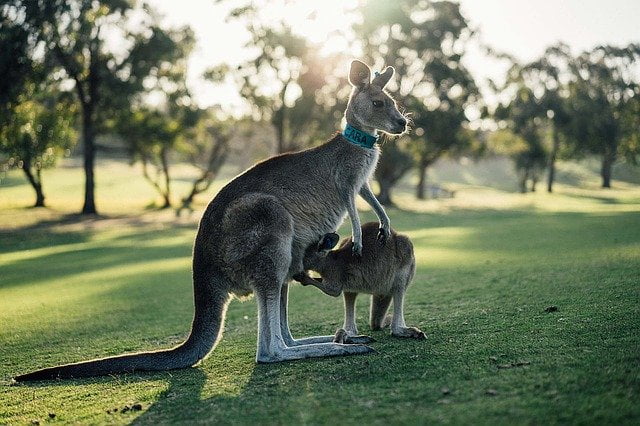 Jump to the first section on this page to begin with the topic question. Continue reading for a brief but concise background on kangaroos.

Kangaroos or ‘roos’ as they are colloquially referred to, are pouch bearing terrestrial mammals that belong to the macropodidae family of marsupials along with wallabies, wallaroo and tree-kangaroos, to mention a few.

The term kangaroo is actually used to describe the largest species of this family, with the smallest being the wallabies and intermediary sizes designated as wallaroo. Some distinct members, across different generas also exist, some that look far different from what modern day kangaroos look like.

Despite this nomenclature used to distinguish members of the family however, some species of kangaroos and all species of wallaroo share the same Osphranter subgenus of the macropus genus found within the broad taxonomic family of macropodidae.

Another species belonging to the kangaroo family group are the tree-kangaroos, but this group of animals occupy a separate genus from the three species mentioned above, and are not as closely related to them; they are much more smaller and shorter than them.

All kangaroos are strict herbivorous with some being predominant grazers; feeding on a wide variety of grasses, while others incorporating a significant amount of shrubs and hypogeal fungi in their diets.

But similar to these ruminants animals, kangaroos are able to regurgitate food and chew cud to aid digestion, but they are rarely found doing so.

With this breif excerpt, we hope we‘ve been able to communicate a lot of information about the Australian kangaroo. So we’ll now focus our attention on the main topic of discussion which is the range and habitat of kangaroos.

Here is what you’ll learn from this article.

Where do kangaroos live?

Kangaroos are endemic to the Australian continent. They are found widespread across the entire region from north to south, east to west.

Modern recognized group of kangaroo are generally split into four distinct species distinguished by a lot of factors such as geographical distribution, external morphology, appearance, behaviour and diet choice.

Now that you know what countries modern kangaroos are native to and what the different species groups kangaroos are split into, let us expound briefly but concisely into the distribution and habitat range of each species.

Where do red kangaroos live?

Red kangaroos live over most part of central Australia and some part of western Australia. In short, their range spans across mainland Australia excluding the more fertile areas such as the east and south eastcoast, the southern portion of western australia, and the tropical rainforests along the northern coasts.

The highest population of the red kangaroos occurs in the rangelands of western New South Wales.

Red kangaroos often search for food in areas with open plain habitat without trees or bushes, but usually resort back to places with scattered trees to take cover from the fierce claws of the sun.

Map of the red kangaroo habitat

The Antilopine kangaroo is the third largest kangaroo after the red kangaroo and the eastern grey kangaroo.

Males have a pale furred ventral side that begins fading into a reddish tan at the sides of the stomach and becomes fully reddish at their dorsal (back).

Females have a similar but much lighter coloration and their head and shoulders are additionally colored grey.

Males have an average head to body length of 1.2 meter while females rarely exceed 0.9 meters. Females have a maximum weight of 20 kg while males can reach more than double that weight at 50 kg.

Where do antelopine kangaroos live?

Antelopine kangaroos inhabit the northern portion of the Australian continent. Their distribution is patchy.

They can be found in the Cape York peninsula in Queensland, in the top end of the Northern territory, and the northernmost region of western Australia, the kimberley.

Antelopine kangaroos prefer tropical habitats with perennial grasses to forage from. They can also be found in vegetation occurring over lower hills and plains. They prefer altitudes less than 500 meters.

The eastern grey kangaroo is the second largest kangaroo species and the most abundant of all species in Australia — with a population of several millions.

It is also the second largest and heaviest marsupial and endemic mammal in Australia.

The eastern grey kangaroo is also known as the great grey kangaroo or the forester kangaroo and it is more closely related to the western kangaroo (it looks pretty much like), than the red or antelopine kangaroo.

The eastern grey kangaroo has a soft light grey to brownish-grey coat with a mostly sliver, cream or nearly white underside.

Where do eastern grey kangaroos live?

Eastern kangaroos live in the eastern third of Australia which includes: the eastern coastlines and all of queensland with an exception of western south wales, Cape York, and some parts of Tasmania.

Eastern grey kangaroos are split into two subspecies, with each inhabiting different areas within the easter third portion. They subspecies and their habitats include.

The western grey kangaroo has a thick coarse fur with a coloration ranging from pale grey to brown. Males, just like all other species of kangaroos, are twice as large and more broader than females.

Where do western grey kangaroo live?

The southern region where they are found include: Southern Queensland, western Victoria, and southern New South Wales. Some of these ranges overlap with those of the eastern grey kangaroo, where the two species can be difficult to tell apart from by mere looking.

The population of western grey kangaroo is more populous in the western areas of the Nullarbor Plain in Western Australia, and western Riverina district of New South Wales.

Western grey kangaroos are also split into two subspecies which inhabit different areas within the southern Australian portion. The species and their habitats include:

Western grey kangaroo can adapt to a lot of habitats, but they prefer areas with a variety of trees and vegetation (for cover, food and protection). They can be found in open woodlands, heathland, grassland, forests, gulfs courses and near city areas.