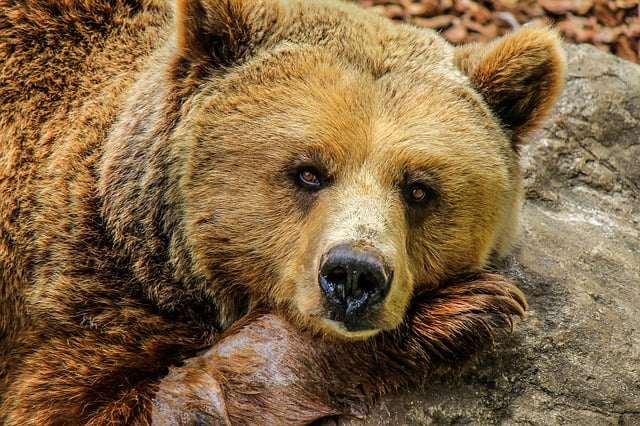 In the latter stages of every year, around the browny period of early October or so, some species of northern bears like the grizzles and black bears retire forcefully into partly insulated dens, curl up their bodies into large insulate bowls and remain periodically dormant until the green vegetation of early spring approaches.

The young, the old, males and females do it. Even pregnant mothers and those nursing their cubs do it. It’s called hibernation. A state of suspended animation which resembles the long sweet night rest of a heavy drunkard.

They all do it and we know, but what triggeres this mysterious behavior? Why do bears retire into their dens at nearly around the same period each year?

In this article, we’re going to explore exactly what the reason is that triggers bears into this hibernation. We’ll also discuss in brief details how hibernation works in Northern bears bears.

Why do bears hibernate?

Bears hibernate in order to avoid the long, rusty famine of the winter season when food resources turn extremely scarce and going out to forage becomes energetically too costly. The only sustainable option is to remain periodically inactive in a fully insulated den until the succulent berries and fresh fishes of early spring arrives.

How do bears know when it’s time to hibernate?

Scientist think that overt or external clues influence a certain compound in a bear’s blood which communicates a signal to the brain and other tissues in the body to begin preparation for entry into hibernation. The compound is called “Hibernation Induction Trigger” (HIT) and the exact process of how the influencing process works still remains a mystery.

When the hibernation induction trigger compound begins acting and setting bears into the mood for hibernation, they gradually begin to turn lethargic and weak as days and weeks progress.

Their heart rates, body activities and core body temperatures can be observed to drop consistently and gradually, but slowly. They forage hyperphagically for berries and food and begin to excavate insulate dens that offer protection against predators and external factors such as snow, rain and cold.

On the onset of winter, when snow arrives and ambient temperature drops as low as below freezing point, the consistent drop in the bear’s bodily activities increases even further. Bears retire into their dens and remain periodically dormant for several months on a stretch. The peak repression happens usually two to three months after den entry.

The overt clues that influence the “Hibernation Induction Trigger“ include external factors such as length of day, snow cover, dropping temperatures and dwindling food resources.

When the bear begins sensing these external cues, the compound in the blood communicates with internal systems and organs that it’s time to begin turning down and preparation for entry into hibernation.

How do bears prepare for hibernation?

Preparation for winter hibernation in bears is simple. They forage intensively after their internal alarm rings, often one or two months before the onset of winter.

They forage for their favorite foods and consume voraciously until they are able to put up a lot of body weight. Grizzly bears can gain as much as 10 pounds per day while being hyperphagic. Bears deposit their calories as white and brown fats in their bodies. They’ll need these body fats in order carter for their energy needs as well as water requirements during hibernation.

— When these fats are metabolized (or are burned to supply energy) they provide for the water requirements of the bear and when brown fats are used, they provide the energy required to fuel the bear’s infrequent periodic arousals —

After or while putting up enough body fats to rely on during hibernation, bears begin their look for proper insulating and protective dens. The dens are made in such a way to provide reliable protection against hungry and ferocious predators and also from the biting cold of winter.

Bears can den in hollowed out tree trunks, beneath thick brambles and brushes, in caves, rock cervices, high way culverts or even in dug out spaces on hill sides. Bears can also den in previously occupied dens.

The typical bear den is usually lined up with insulate materials such as spruce bough, leaves or duff.  It can also contain other plant materials including tree barks. These insulate bedding materials help keep the bear warm through air pockets which trap body heat and form a microclimate around them.

Bears usually retire to their denning areas around one week before entry. They sleep and rest heavily during this period and hardly go out to forage since they have accumulated enough fat reserve for winter. They appear lethargic as a direct effect of the HIT.

What happens when bears hibernate?

Upon the full-force arrival of winter; a period which coincides with the browny period of early November or so, when northern bears have fully prepared a denning home and accumulated enough energy reserves within their bodies, they incessantly migrate into their denning homes and begin hibernating.

During hibernation, bears actively but not drastically and instantly reduce their core body temperatures and other physiological activities.

Their body temperatures are kept 12F degrees within their normal body condition. Activities like heart rate decrease from 50 beats per minute around November to nearly half that value in January.

Metabolic rate also decreases significantly and blood pressure can drop so low to the point where they stop using one chamber of their hearts completely.

During hibernation, some bears can go as long as 100 days or so without waking to bumble around or defecate and urinate. But eventually, they would do so.

They newly born cubs do not hibernate but rather remain consistently glued to their mothers warm underside for the entire period of her dormancy.

The number of embryos allowed to develop into fetus in pregnant females seems to be strictly regulated by the thickness of the mothers fat. This fats is also what provides the necessary warmth for embryo as they grow within the confined perimeters of the womb.

When do bears wake up from hibernation?

Bears wake around early to mid spring when temperatures have become more tolerable. Mothers emerge out with their newly born offspring to forage for food and may take up to 3 week to completely vacate the vicinity of their hibernating dens. Other bears only stay around for about a week or so.