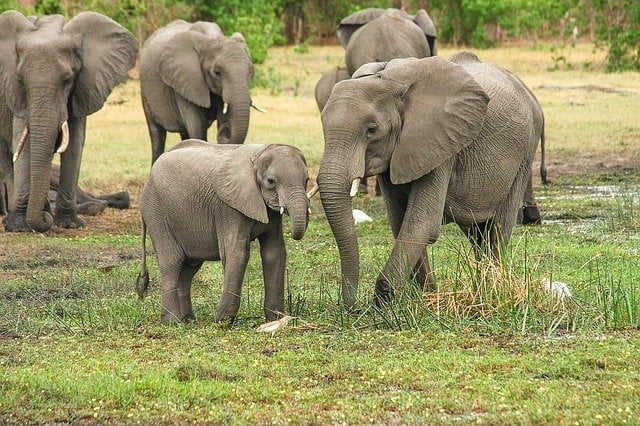 The proper and most widely accepted term used to address a group of elephants is however, a herd of elephants.

That’s what every single zoologist and their moms are familiar with, and that’s the term you can safely use and not run into mock stares.

The terms of venery; memory and parade as tied to elephants are not ones that are very popular, even though they have roots dating as far back as the Late Middle Ages.

That’s when the tradition of using nouns of assembly to address a specific group of animals was suspected to have stemmed up, and that’s probably when the memory and parade terms were coined up, or, perhaps some few centuries later.

The upper class hunting culture of the Middle Ages is mostly given the credit for the development of such vocabulary which has proliferated over the centuries.

One widely popular book (at that time) known as “The book of Saint Albans” entered over 160 terms of venery which were meant to sharpen the hunting language of medieval gentlemen (hunters) to prepare them for conversations at dinner parties. So obviously, these terms were primarily made up by hunters for hunters to use.

But today, most of these terms which were coined purposefully for the sake of humor at their time, have little to zero practical application. They just never fit into the modern atmosphere well. Imagine a business of ferrets or unkindness of ravens!

For lexicographers, most of these terms don’t even fulfil the criteria to be entered into records and be used consistently in running prose. Only the more common terms like herd, flock and swarm are preferred and accepted.

The terms of venery; “memory” and “parade” are really no more than fanciful nouns that were coined up purposefully for the sake of humor and that of middle age hunters!

Why is a group of elephants called a memory, parade and a herd?

First let’s start off with memory. It’s an early middle-age-word that has always meant “remembrance” or “recollection”. Or at least revolved around these meanings.

And when you think about memory in relation to elephants (and compared to other animals), the first thing that cross over to the mind is how superb and fantastic their memories are.

Elephants have a remarkable recall power and they are able to recognize faces of up to 1000 relative, friends and families of theirs. Elephants, despite inhabiting one of the most complex ecosystem in the world — the tropical rainforest, know how to recall routes to their favorite food and water sources easily and also to the specific locations of as many as thirty companions at a time.

If you think such is an easy thing to do, pack up your bags together with your family, get in the jungle and experiment that for yourself.

Elephants don’t only register faces into their memories, they also pack a store of social knowledge that enables them for example read and recognize the body language of unfamiliar elephants in order know how best to react within their presence.

Elephants additionally know how to recognize their self in a mirror which is not something that many members of the animal kingdom can do. And oh! One impressive trait that i almost forgot, elephants are very much capable of holding paint brushes in their trunks and rendering beautiful portraits!

The fact that elephants have good memories and that English hunters of the late middle ages or whoever it is that coined up the terms, must have perhaps, observed so too, might have been the sole inspiration for calling a group of elephants a “memory of elephants”.

One of the earliest English meanings of the term parade (the 17th century) revolves around public procession before a superior officer especially of the sober and non-celebratory variety.

Simply observe a group of elephants walking down the savanna paths and you’re not far from seeing a sober and a non-celebratory kind of procession. A calm and coordinated movement led by an experienced matriarch or dominant male.

Another variety of the meaning sprung up in early 18th century and meant “a long series of people or things that come one after another”. See the relationship?

Herd has longed been used to refer to a large group of wild or domestic animals. The word has existed since the 13th century, and has always bore that “animal group” meaning as part of it’s definition. So the reason why a group of elephants is “a herd of elephants” is easily justified.

How many elephants make up a memory, herd or a parade?

As many as three and as much as 144 elephants (as in the case of the largest male gathering ever observed by scientist) make up a memory, herd or parade of elephants.

Elephants only bundle into a single sex group and rarely into a mixed sex group except during the mating season when males will meet up with the females to try their luck at courtship, or when males want to socialize with females.

A typical female family group consists of a few mothers and their offspring (whether males of females, until a certain age (14 or 15) when the males break off from the group and join existing male groups or live on their own).

In female groups which is the most pronounced and common in the wild, a matriarch which is the oldest of the pack assumes the leadership position. All other elephant’s follower her lead until she dies and a new leader emerges, often her daughter.

The sister of the matriarchs only become the new head when they matriarchs fails to deliver a baby during her life time. Different female groups can expand into a much bigger congregation to form bond groups or even much bigger to form clans which is often short lived, and likewise, they can split into smaller groups when they become too large for the available resources.

In male groups, the most dominant male assumes the leadership position.

All names related to elephants

Names of some popular parts of an elephant

Bunu. M. (2020, November 22). What is a group of elephants called?. Retrieved from http://emborawild.com/what-is-a-group-of-elephants-called/