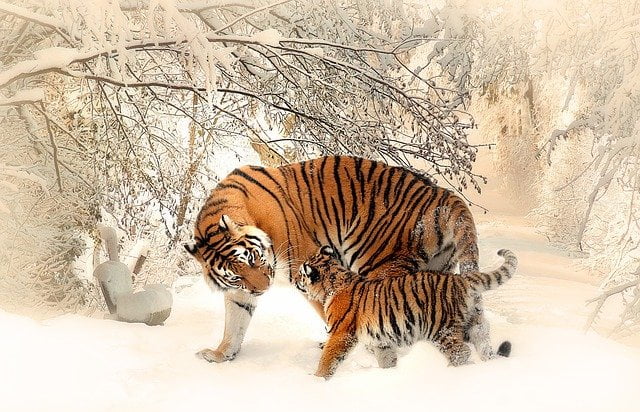 Using the two collective nouns from above would only leave you with blank stares and a few cold moments.

That’s because the terms are fairly used by people around the world. As a matter of fact, it seems like the terms were hardly ever put to use in the past two centuries. So barley anyone, no matter how old they are, would ever recognize them as the proper collective nouns.

One of the reasons why I think the terms are not so popular is probably because tigers are not exactly found congregated in huge numbers in the wild, although such observance must never be mistaken in any way for the idea that tigers are asocial animals.

They are nowhere near asocial, rather, they will seize up any opportunity to get social.

All it takes for a tiger to share their residence with an opposing party is a simple show and establishment of dominance and then acceptance of such dominance by the intruder.

Once a territory owner has established dominance over an intruder, he/she usually allows them to stay within this territory (if they wish) so long they’re not getting too close.

And when it comes to sharing kills, tigers would happily do so with their female mates, their cubs, their relatives or any random tiger that is just hungry and needs help.

While group of tigers is certainly a sight that can consistently be seen in the wild, the opposite is true for captive bred tigers, and so perhaps, the only people that can maybe recognize a group of tigers as a streak or an ambush would be seriously aged zoo keepers? If you have a great grand dad that has ever worked for a zoo or rescue center, ask him, may be he knows!

Why are group of tigers called a streak or ambush?

Who knows? They could be one of those terms of venery that were simply made up by a random person for the sake of humor, or, they could actually be a purposefully crafted collective nouns that were truly put to use in running prose and in very early centuries, but ended up fading with time because of their incompatibility with time. (I’m still researching and any heads up would be very much appreciated.)

It really seems, for now, that the former is the case and that these terms were actually made up (for fun) along the way after the late middle ages; because that’s when the practice of identifying specific animals by group names is speculated to have stemmed up.

When we look up the meaning of the word streak in connection to its roots (from Merriam Webster Dictionary), there are quiet a few definitions that actually stand out, which may perhaps offer some insight as to why group of tigers are called a streak, first is:

Streak: To move swiftly (which could make allusion to how tigers move swiftly in order to attack their prey). This definition of streak (not as applied to tigers), existed and was first used as far back as the 12th century.

Streak: A line or mark of a different color or texture from the ground or background (which could make allusion to their black stripes that strike dissimilarities to their background color of orange or white).

How many tigers make up a streak or ambush?

As little as three; a mother and her babies, and as much as 10 individuals make up a streak. Groups can contain mother and her cubs, relatives, or other unrelated tigers, and groups usually disband quickly after getting together.

Why are tigers called tigers in the first place?

The origin of the tiger’s name may have come from the Persian word of tigra meaning “sharp” and the Avestan word tigrih meaning “arrow” which could have made reference to the speed of the tigers leap.

All names related to tigers

A pairing or breed consisting of a tiger and lion is called a liger. If you ever ask why it’s called a liger and not a tigon, there’s a perfect answer for that.

Because lions are the kings of the jungle and not tigers! So they should come first naturally. We’re just joking! The offspring is so named if the male specimen is a lion and the female is a tiger. For the opposite, it’s definitely a tigon!

Names of some part of tigers

Bunu. M. (2020, November 21). What is a group of tigers called. Retrieved from http://emborawild.com/what-is-a-group-of-tigers-called/