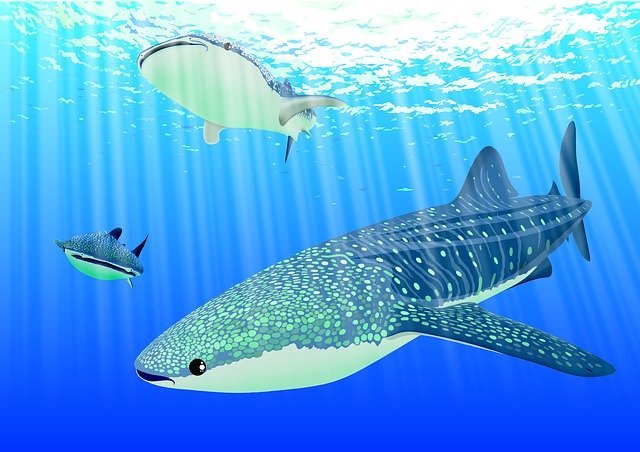 Whale sharks have teeth, and their teeth are extremely numerous. The ReefQuest Center for Shark Research: an organization specially dedicated to the conservation of sharks and rays through it’s scientific research and public education programs, estimated about 27,000 teeth transversed between the upper and lower jaws of the whale shark.

That’s a great deal of teeth for any fish or shark species to possess in their mouth at once. As a matter of fact, that’s an incredibly and seemingly unreal number of teeth for any vertebrate animal to posses in their mouth at once. By now you probably get the gist, that whale sharks are the animals with the most number of teeth visible in a jaw at once, You can read more about this information from the link below:

The teeth of whale sharks are not strongly differentiated in the upper and lower jaws the way those of humans and most other mammalian vertebrates are.

This means that they have a homodont dentition (all their teeth are almost identical) as opposed to a heterodont dentition (having set of teeth that are distinguished from one another in shape, function and size).

For instance in humans and other mammalian vertebrates like felids, the teeth are easily identified as either molars, premolars, canine or incisors by their shape and size.

Regardless of the morphology of the whale shark teeth however, nearly the same materials that make up the true teeth of vertebrates alike also constitute those of the whale sharks: their teeth have an outer layer covering called enamel, it has a dentine and also a central pulp cavity.

All teeth present on the upper and lower jaws of the whale sharks are somewhat similar in appearance, having a strong medial cusp (a major projection of the crown: the portion of the teeth that is not connected to the jaw, the raised edges), lack cusplets (the small projections that usually lie lateral to the basal magin of the crown, see image below), and finally lack any labial root lobe.

Their symphysis teeth, which are those located at the center of both the upper and lower jaws, are small, not enlarged, and usually look like fangs.

The teeth of whale sharks are minute and only measure about 3 millimeters in length from base to crown. That’s roughly about 1/8 th of an inch. Here is what the teeth of a whale shark looks like:

From the section above, we learnt that whale sharks are the animals with the most number teeth visible on a jaw at once, their tooth count can clock up to 27,000 in numbers, but that’s only one part of the shocking revelation.

Despite having such supernumerary tooth count with individual sizes rivaling the size of the average match head, whale sharks do not appear to use their teeth for any purpose at all.

They don’t feed: chew, masticate or grind their food using their teeth, or even use it for any other purpose different from feeding. Their teeth simply lie bare in their mouth all the time.

How do whale sharks have teeth and not feed with them?

First, you have to understand that whale sharks are opportunistic ‘filter feeders’ that consume their preys alive. They swallow them directly through their oesophagus and into their their stomach without chewing or masticating on them. This is made possible with the kind of diet that whale sharks have chosen over time.

Whale sharks feed primarily on some of the tiniest organisms that live in the open seas: they are called zooplankton and they include: squids, fish eggs copepods and shrimp.

Whale sharks basically forage at the surface of the oceans but can be seen gradually moving down the ocean as plankton change position in response to fading sunlight. They move deeper and deeper into the seas as sunlight begins to fade over the course of the day.

Whale sharks have different modes or styles of feeding, but their primary way of consuming prey is by filter feeding: a method which involves swallowing plankton rich water into the mouth, separating food items from water by means of filter pads and then swallowing the dense food substrate remaining.

The three modes of feeding observed in whale sharks include:

1] Surface ram filter feeding: The whale sharks rises to the surface of the open water with part of it’s dorsal head visible on the outside, and begins to swim forward (usually at a speed of 1.1 meters), ramming plankton rich waters into its mouths and separating food from water using its filter feeding mechanism. The whale shark can be observed coughing out white bolus every 3 to 12 minute during feeding in order to clear the filters off stuck foreign and food particles.

2 Sub surface suction filter feeding: In this method, the whale shark assumes an almost vertical position near the surface of open waters, but not protruding any of its mouth outside the water, and then uses a suction mechanism to suck plankton rich water into its mouth.

All these modes of feeding do not require to the use of teeth in anyway possible: either for chewing or grinding. Because whale sharks have no apparent use for their supernumerary tooth count, some icyeologist consider them to be the vestigial structure that remained from the true teeth their non-filter-feeding, ancestors possessed.