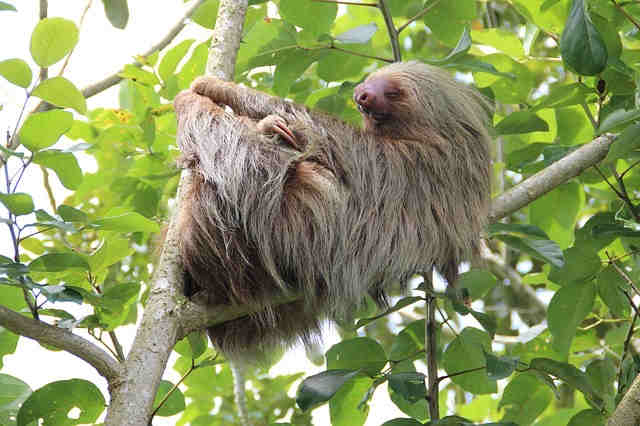 Sloths are the most, well, not so affectionate members of the animal kingdom you’re ever going to meet. They simply don’t give a damn about you and love to mind their own business. Unless of course, you want to test their patience!

Sloths are neither mean nor affectionate. They are solitary species that dislike any form of human interaction.

When subjected to forceful physical exposure, they internalize their reaction to appear calm and gentle on the outside although they will not hesitate to display their aggression when unduly disturbed.

Wild sloths are generally calm and peaceful  due to their lethargic nature and cloistered lifestyle, among a few others.

Their anatomic and physiologic peculiarities do not afford them the luxury of being aggressively natured, and their lonely lifestyle makes them even more passive and shy.

As a result of this, sloths typically do not display an offensive reaction when confronted by humans. They simply retain a gentle composure and will only strike back when harassed or unduly disturbed.

In-truth, however, there is a cogent reason as to why sloths appear to be wearing a perpetual smile all the time and also stretch out their arms when approached by humans.

It turns out that a sloths facial area lacks the significant complexity and numbers in muscle tissues to bestow upon it a life of its own [1].

And this is in accordance with the principle of conservation of energy that governs the sloths entire anatomy and physiology.

In order to conserve the little energy obtained from the low calorie diet of tropical leaves and foliage, sloths have evolved some terrific energy saving adaptations, part of which is to get rid of unnecessary muscle tissues that would otherwise require a bulk of energy to maintain.

So, sloths overall, have a reduced number of muscles in comparison to other mammals of similar size. Their facial area appears to be one of their body parts that have sacrificed a lot in terms of this adaptation.

A huge portion on the sloths facial region is practically immobile due to the absence of motion inducing muscles that can cause a variety of facial expressions.

Their ever-smiling appearance is a combined effect of facial coloration and musculature and has nothing to do with joy or excitement.

The ever-smiling face is more prominent in the species of the two toed sloths than in the three toed variety.

For the other part of the puzzle, why sloths constantly stretch their arms when approached or handled by humans, a possible explanation has been proposed by Dr. Becky Cliffe, a sloth biologist with first hand experience working with wild sloths for close to a decade now.

She claims that the constant arm stretching indicates fear and anxiety, and that the animal employs this technique as a hoodwink to look bigger and scarier in the eyes of its aggressor.

Approaching a sloth does more harm than good

It has been scientifically proven that adult sloths experience an elevated level of blood pressure and heart rate in response to direct physical contacts with humans (and even from mere approach) [2].

They have no way to physically express this emotion however, since their physiognomy is barely a static and their lethargic nature forbids (or rather restricts) them from expending energy unnecessarily, (being constantly aggressive and all).

Another research (which investigated the impact of ‘selfie’ tourism on the behavior and welfare of brown throated three toed sloths), showed that individual sloths that were isolated from their natural habitat and used for wild life tourism exhibited behaviors that indicated stress, fear and anxiety [3].

They slept less compared to their time in the wild and were more vigilant, suggesting they may have been fearful of their surrounding.

Most of the sloths used for the experiment also demonstrated an arm stretching behavior when passed around from one tourist to the other. This could have been their way of attempting to intimidate their “aggressors” — just as Dr. Cliff suggested.

Further, some documented observations have shown that sloths, particularly the three toed variety, can easily get their immune system compromised from mere physical contacts with humans.

Others have even asserted that a pregnant sloth may likely end up with a spontaneous abortion when unduly subjected to these affairs.

Contrary to what seems to be the case for adult sloths, infant sloths seem to care less whether they are petted or groomed.

They lack a single knowledge of the situation and do not exhibit any levels of fear, stress or anxiety. However, even they too have been observed to shy away from human contacts immediately after attaining maturity.

In the end, it seems their wild and ‘prey animal’ instincts eventually prevails.

Sloths can defend themselves when they need to

Whilst sloths are characterized by a predominantly calm and placid nature, they will not hesitate to strike back at their aggressors when manhandled.

The common response of a wild sloth when approached by a human (especially the two fingered one), is to try and flee away to branch extremities as fast as possible.

And surprisingly, they do that relatively quickly. Three toed sloths often transition into a mannequin state to fool off their predators.

When sloths fail to keep their ‘aggressors’ at bay (i.e when they are caught, wounded up or petted like cats), their secondary reaction is to remain calm and submissive up until the point where they can no longer tolerate the handling.

Then, they will strike back aggressively by action of clawing or biting. A hiss warning and arm stretching behaviour often precedes the aggression.

Sloths posses long claws that are curved and strongly built and also have large sharp teeth that resemble the shape of a cone.

When they swipe at their aggressor, their claws are capable of piercing deep into the skin and inflicting injuries that can easily get infected.

When they bite (a maneuver that happens faster than the speed of light) their sharp yellow teeth is capable of burrowing holes that are large enough to be seen through.

Two toed sloths are generally the more aggressive (in the sloth world) of the two sloth variety.

They are bigger, stronger and less passive compared to their three fingered counterparts. Where a three toed sloth may remain submissive and only strike back when unduly disturbed, a two toed sloths will almost always return the favor instantly.

A typical scenario to demonstrate how strong and aggressive sloths can be when they feel threatened is their ‘restraining’ process for clinical examinations or blood collection.

They need to be manually restrained by two or more individuals and are usually held in a ‘dorsal decubitus (lying on their backs)’ position with their pelvic limbs spread out wide on a flat surface and their thoracic limbs held firmly (but gently) in place, so that the animal may not be able to grab or bite the person performing the sampling [4].

Additionally, gloves and nets are sometimes used for added protection and advantage.

Sloths are not aggressive or vicious. They are gentle creatures that like to mind their own business and avoid interfering with the business of others.

Even in the wild, they hardly ever interact with one another except when mating or nurturing for their young.

When sloths are confronted directly by humans, their habitual reaction is to remain placid on the outside, and will only fight back when the disturbance proves too much to handle.

(You must note that the temperament of sloths will vary according to individuals just like it does in humans and other animals species. So not all sloths will react to danger in a calm and peaceful manner).

Sloths can attack when scared, overly petted, hugged, harassed or when their young ones are threatened.

Many researches and observations have shown that sloths can be physiologically and internally allergic to any form of human interaction.

Even though sloths posses predatory-like features within their meagre defensive repertoire, they hardly ever attempt to intimidate or start an attack against humans.

They are not mean, they are not overly defensive. They can be extremely savage!

Obsessed with sloths? Read more about them in the category dedicated for them.