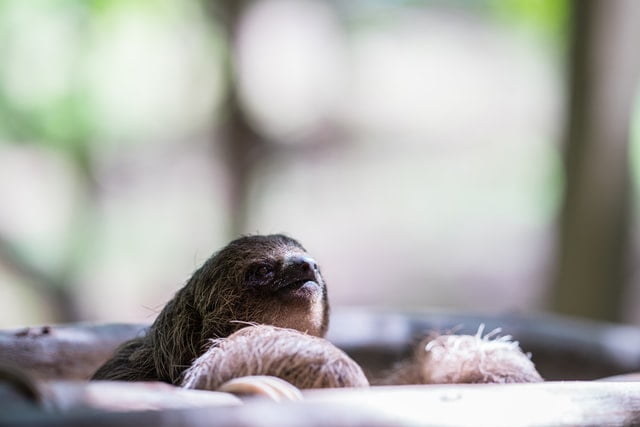 Baby sloths are a delight to look at. Cute and adorable but consistently neglected by the internet. Every page has a lot to say about adult sloths or sloths in general but very little about their neoates. We dare to be different, and that’s why in this article, it’s all about baby sloths. We present to you the most exciting, intriguing and interesting facts about baby sloths that time has permitted us to dig out.

1) Baby embryos can stay nourished and grow within the torrid perimeters of their mother’s womb for upto 12 months: Two toed sloths have a gestation period of upto 12 months while three toed sloths have less than six. The Hoffmann’s species of two toed sloth gestate for upto 10 months while the Linnaeus’s species unfortunately bear the hurdles of pregnancy for two extra months. Some species of three toed sloths can gestate for as little as four months.

2) Baby sloths are born heads first with ventral side facing upwards or staring deep into the canopies: This position enables them to secure a firm grip on their mother abdominal hairs in order to advance further onto her chest area. In that position, they are much safer and their chances of slipping off to their demise are lowered.

Baby sloths may sometimes fail to secure a firm grasp onto their mothers body and can be seen dangling freely but firmly teated to their mothers body from an umbilical cord. The mother usually retrieve them as quickly as she can before the birth of her placenta which would send the baby crashing down violently into the understory vegetation.

3) Baby sloths weigh less than 1 kg when they are born: Two fingered babies are often bigger than their three fingered counterparts. Weight can reach a high 400g and low 150g. Litter always consist of one baby with twins rarely occurring.

4) A dead neonate on the floors: The carrion of baby sloths are sometimes found lying bare on the forest floors simply because their mothers proved unwilling to leave the safety of the canopies to retrieve them after a nasty fall. Would you dare to do so when the prospect of an irate predator waiting low-key and planning to ambush is highly likely?

6) Baby sloths are born with the particular set of permanent teeth they bear for the rest of their lives: Most are born with incomplete teeth that fill up to capacity after only few months. Their front teeth are peg like in structure while their posterior teeth are molariform. A diastase is often observed between the two front and back teeth and the space is much more pronounced in two toed sloths.

7) Baby sloths may cling onto their mothers for more than 5 weeks after birth: During this period, baby sloths are fed consistently with nutrient rich milk from the two teats located on their mothers chest. They grow at a naturally patient pace but develop muscle tissues and grasping strength much more quickly. This early strength is crucial in order to enable them support themselves from tree branches while they independently explore their maternal tree and after they are weaned.

8) Baby sloths can develop appetite for solid foods after only four days of birth: Baby sloths that are left uncared for (in rescue centers and zoo) by their mothers are often fed with solid foods like apples, bananas, flowers and other leafy materials after their five weeks artificial weaning from goat milk.

9) Baby sloths learn what leaf to eat by licking their mothers lips: After weaning, baby sloths consistently lick the lips of their mother to lean what food to consume as forage. They begin to explore their maternal tree on their own and can be very clingy to tree branches. They hardly fall. They may also occasionally be fed leaves from the paws or lips of their mothers, or chomps directly from their mothers mouth. Baby sloths feed primarily on tropical leaves in the wild. They feed solely from their birth trees until after they grow independent and move to their own trees.

Two toed baby sloth can have a varied diet after they are weaned, but three toed sloths strictly stick with the diet they grew up eating from their mothers, often for the rest of their lives.

10) Baby sloths are mostly the target for the sloths main predator: harpy eagles: They keenly spy on them from afar a distance and then rush to snatch them off from the safety of the trees. The distance between first sight and final attack is often interrupted by intermittent perches on trees.

Adult harpies may stop at a corner to consume the tougher part of the meal like the heads and limbs, and then return to the nest with the softest parts for their eager and hungry babies.

As an alternate depredation scheme, harpy eagles my push baby sloths away from their mothers grip or (when they are surfing the trees alone) away from branches in order loosen their grip from the tree branches and cause them to fall all the way to the ground. Then, they fly all the way down to retrieve their carrion and head for their nest.

11) It is practically impossible for the average joe to distinguish between male and female sloths or the other way round, by mere physical examination: Test are often necessary to identify the gender of a new born sloth in captivity. In the wild, it’s difficult to differentiate between males and females just from mere sight. In adults of some species however, like the brown thorated, pale throated and pygmy species of three toed sloths, ‘adult’ males are often distingushed from females by the possession of a large yellow-to orange patch or speculum visible in the middle of their backs, but the neonates still remain in-differentiable.

12) Baby sloths reach independence at a minimum age of 5 months and maximum age of 1 years: At this age, they bid their phlegmatic mothers farewell and migrate to new trees often several yards or meters away from their birth trees (in the case of females) and considerable distance away in the case of males.

13) There is no paternal care in the world of sloths: All care and protection are rooted from the maternal side. Males only mate and leave the trees for another shot with a different female or until another breeding season.

14) Baby sloths reach maturity at an average age 2 years: Females mature much more quickly than males: at the age of 3 years. Males can reach upto 5 years before they attain maturity.

15) Captive sloths can live for close to 30 years on average and hit a maximum 60 years or more: The life span of sloths in the wild is currently unknown due to how difficult it is to study them in a natural setting [1]. In captivity however, the median life expectancy of sloths is 12 years, with several cases of individuals surpassing the 30 year marks.

Bittel. J. (2020, March 2). Why this rare video of a sloth giving birth has scientists excited. Retrieved from https://www.nationalgeographic.com/animals/2020/03/sloth-birth-costa-rica-baby/