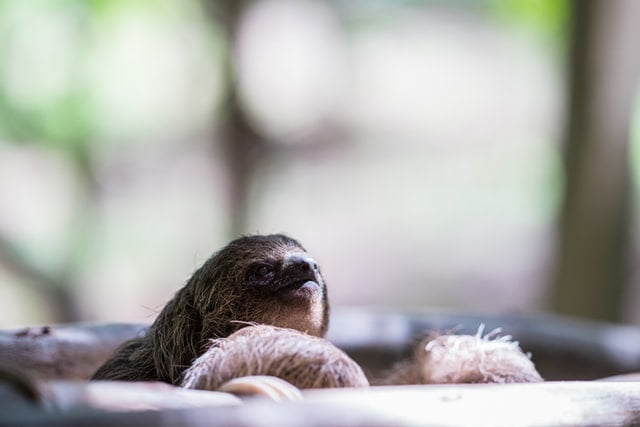 Very interesting question, although i simply can’t understand the intent and (traffic) behind such query.

I mean why would anyone be interested in knowing how often sloths poop? What difference would it make if they pooped twice or three times per week?

Anyways, below is the detailed answer you’re looking for. (I know, turns out i’m just as weird as you are after all?!)

In fact, check out this guide on do sloths die when they poop, and even how do sloths poop.

How often do sloths poop?

Sloths defecate at the base of their favorite tree once every week. They observe a holistic poo dance to clear up some space for their enormous droppings, then defecate and cover up the scats with a quick truffle shuffle.

Adult sloths often take the longest break before defecation, whereas their darling little neonates visit the bathroom (or rather appropriately, stone their ‘shits’ from the safety of their mothers grip) as often as every two or three days, reducing the frequency to once a week as they grow much older.

Once a week, the result of slow metabolism

Sloths have the slowest metabolism of all living mammals which makes their digestive system behave like an extremely laggard entity.

Their meals are made of tropical leaves and shoots (consuming more when the temperature gets hotter: Cliffe and Haut, 2014) and digestion of a single leaf takes about 30 days to fully complete.

As a matter of fact, (Sunquist 1978) observed that food takes 10 times longer to pass through a sloth than it does through a cow.

This slow metabolic rate is the reason why sloths are constantly lethargic and are able to endure visiting the bathroom for up to a week. You cant shit out what you haven’t digested!

Whenever their flood gate opens, about once every week, sloths, specifically the adult three fingered variety, climb down from the safety of their canopy to the base of their favorite tree to defecate.

The favorite tree can be their own modal trees (often the case), or can be any other tree within close proximity to their habitat range. You’ll often see piles of previous shit surrounding the bottom of the selected tree.

A lot of theories have been put forward to explain this bizarre bathroom habit. One hypothesis claimed that this unusual latrine habit is an effort to sustain the ecosystem that thrive within their pelages.

By crawling down to the base of their modal tree to defecate, sloths transport ‘sloth moths’ to their reproduction sites which happens to be their droppings.

The moths lay eggs in the feaces which later develop into adults and fly back to the canopy to take shelter in the sloths coat. In turn, the moths supply essential supplements to the individual which expands on their limited nutritional resources [1].

Another hypothesis put forward by a sloth biologist; Dr. Rebecca Cliffe, explained how this weird bathroom habit only concerns communication and reproduction between sloths, and has nothing to do with mutualism between them and the myriad organisms they shelter in their pelages [2]

Regardless of which theory is right— which explains why sloths observe this strange bathroom ritual, one thing is certain, sloths face a heightened risk of predation and suffer significant cost in energy from this seemingly unnecessary adventure.

Nearly one-half of all adult sloth mortalities observed in a field study in 2013 happened as a result of depredation events when sloths were at or near the forest floor.

It has also been further observed that sloths expend roughly about 8% of their daily energy budget whenever they embark on this suicidal mission to the forest floor.

Although it happens only once a week, it still remains a huge deal for an animal faced with serious energy constraints and limited nutritional resources.

What happens when they’re at the forest floors?

At the base of their favorite tree, sloths wrap their arms tightly around the tree trunk while piercing into the tree barks with their claws and begin to wiggle their hips from side to side in an effort to carve out a small scatting space with their stubby little tail.

Generally, two fingered sloths do not have prominent tails, (the tails are even absent in some species), so they often leave their poops lying around on the forest litters. In fact, they sometimes drop their scats right from the convenience of the tree canopy.

On completion of the holistic poo dance, sloths begin to urinate and defecate; excreting a long fibrous ball that resembles the shape of a rotten banana along with a concentrated urine.

At this point, their stomach can be closely observed to physically shrink in size. If you were to weigh them before and after defecation, you would record an astounding two pound loss, post defecation!

So sloths are nothing but poop and scats behind those shaggy groove coatings. Really.

After a successful bathroom, sloths almost immediately begin their journey back home into the safety of the canopy of their modal tree.

For sloths and their little minds, they’re going as quickly and as fast as they can; But for an agile yearling jaguar, they’re as good as a dead meat!

1) A video showing baby sloths getting trained to poo